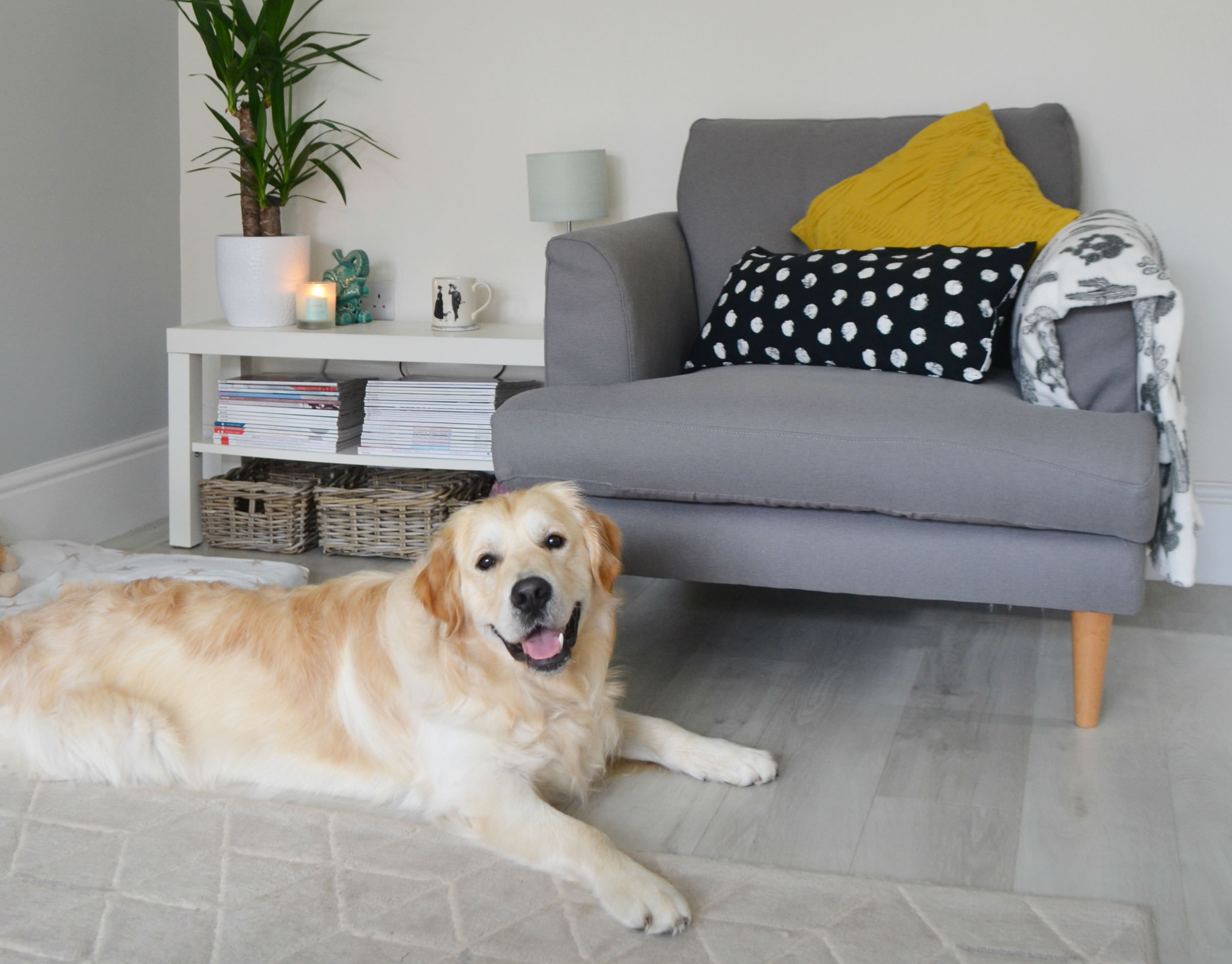 It’s no surprise that I seem to spend more on homeware and interiors in September than I do any other time of the year.  It makes perfect sense; the dog days are done, the nights are drawing in and there’s a distinctly Autumnal chill in the air (I wore my winter coat for the first time this morning… and then ended up shucking it off ten minutes later because we’re just not quite there yet!).  It’s time to get the house feeling warm and cosy and – ugh, yes – THAT Scandinavian word.

Over the last few weeks I’ve been stocking up on candles like a squirrel burying nuts, rearranging things a bit and just generally freshening everything up ready for winter.  I’m definitely feeling ready to hibernate 🙂 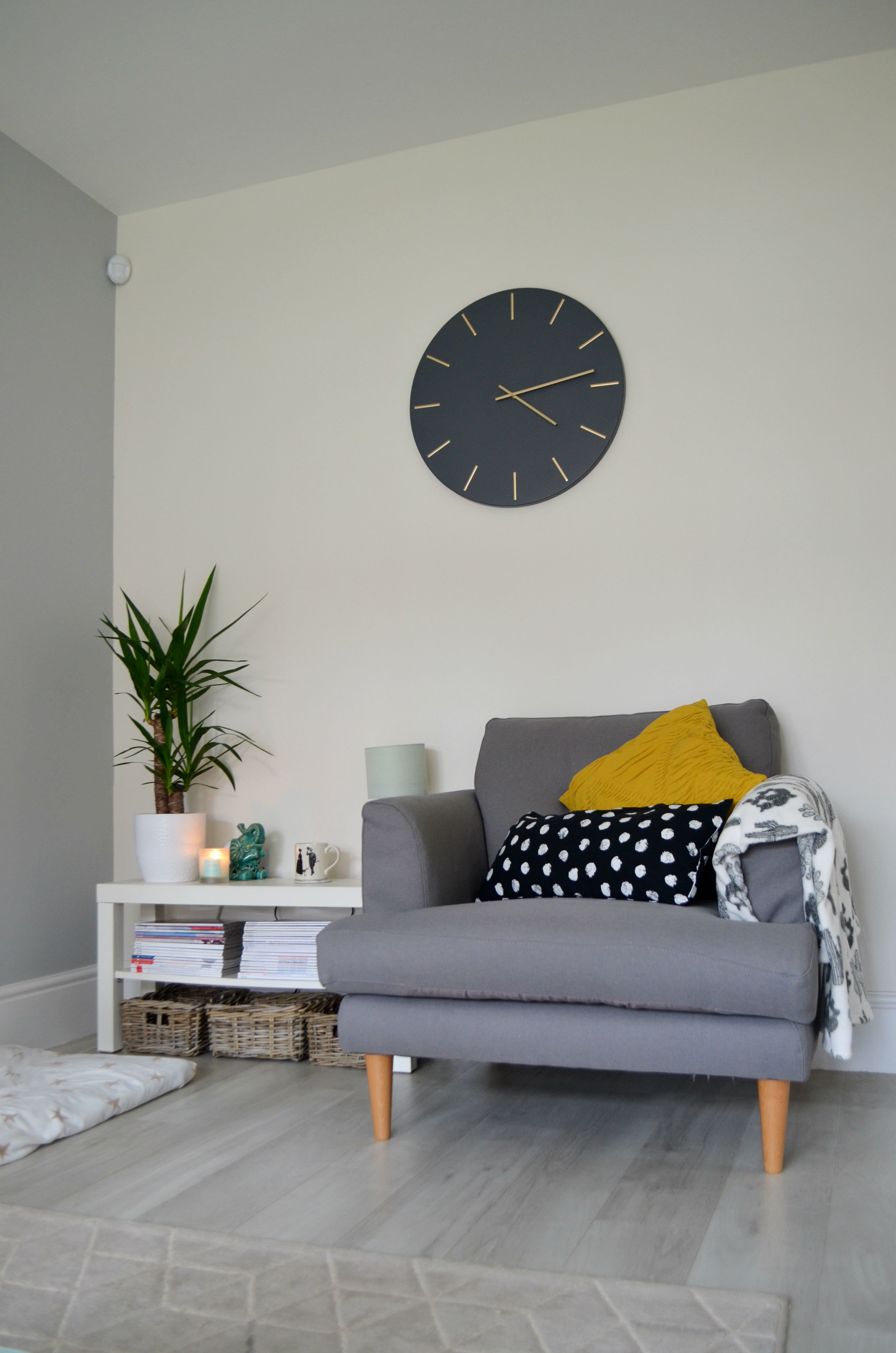 The lounge is the room I spend my life in and I finally feel like it’s “finished” – if there is such a thing.  This corner was a bit boring, so I’ve turned it into my Miranda from Sex and the City “You no longer exist” trashy magazine reading space.  I’m going to be sharing it with Bungle though, his bed is right next to it and he has a habit of sprawling right in front of the chair and leaving his toys everywhere.  We picked up this cheap little side table from IKEA about a year ago but the space underneath it was just wasted; it just seemed to collect tangled cables and dust (…and Bungle fur).  So to make better use of it, I picked up some baskets from IKEA to slot into the gap.  They’re brilliant for storing all of Bungle’s favourite toys.  I also picked up a new Yucca – which I’m not going to kill. 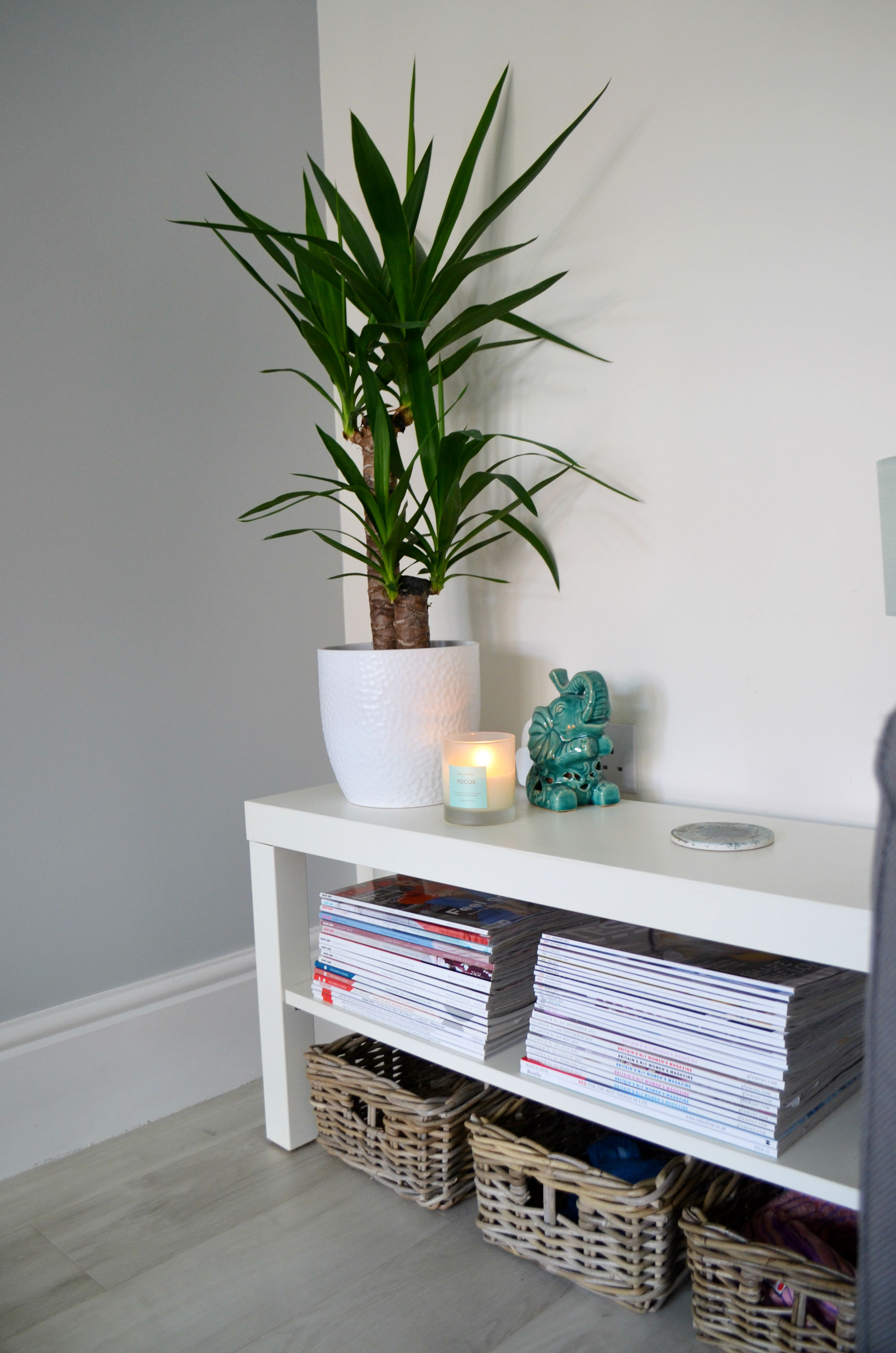 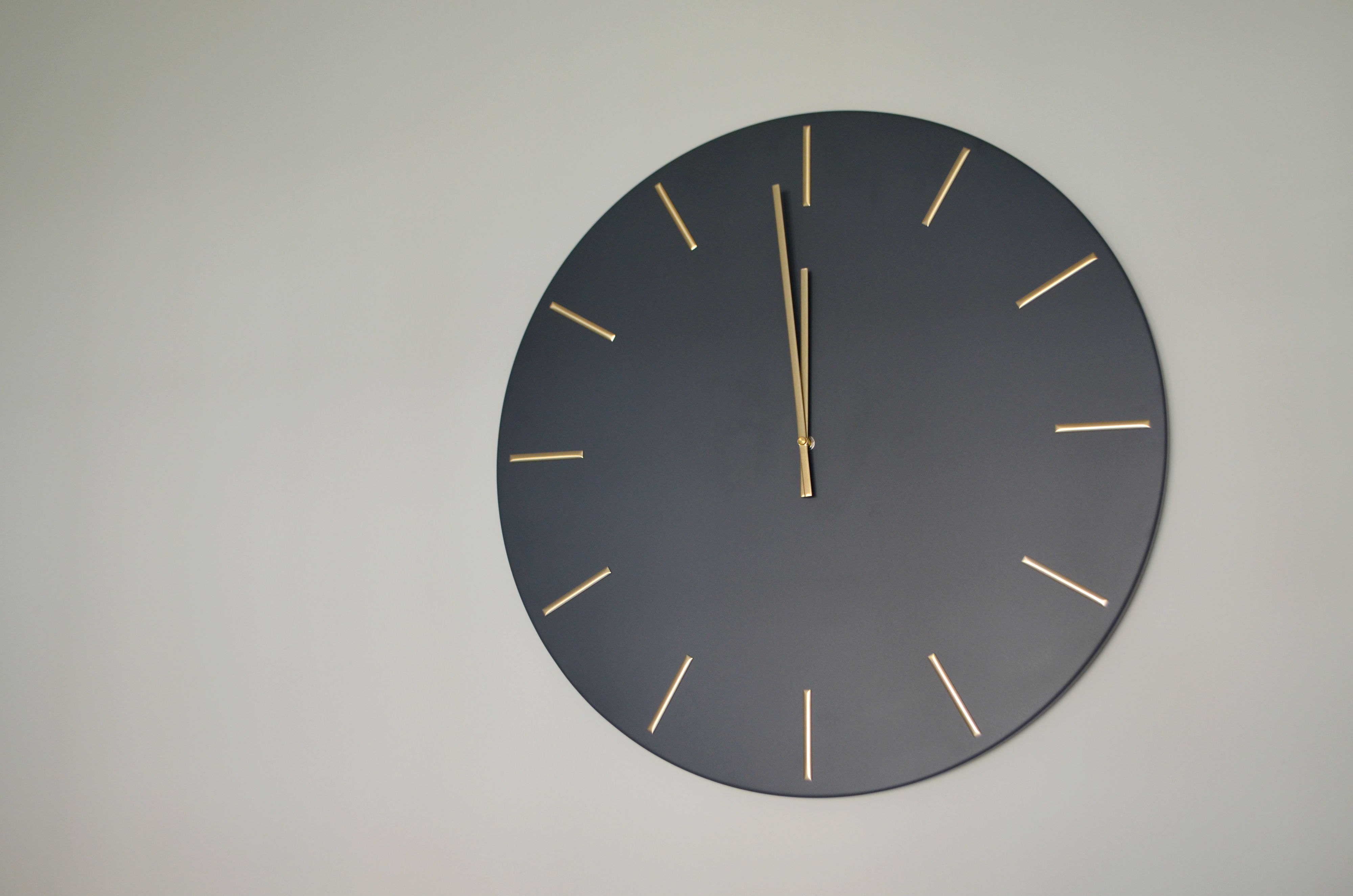 So here’s a tip; don’t ever stroll into a customer collection point stating that you’re there to pick up a “big clock” because the guys behind the counter will misunderstand what you’re saying.  Oh, and also don’t say “oh wow it’s huge!” when they appear with the package.  True story.  Anyway, this “big clock” is from John Lewis. 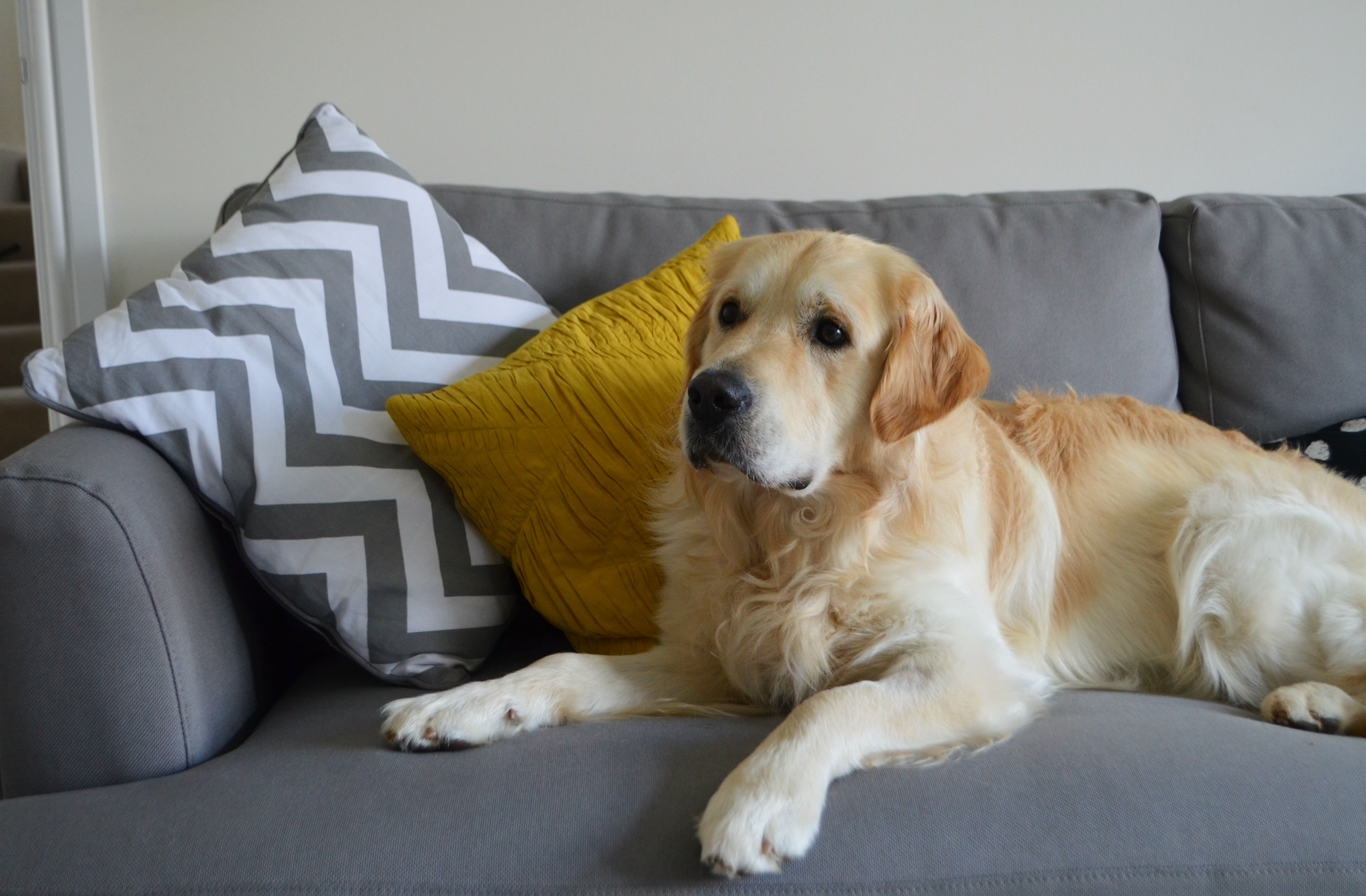 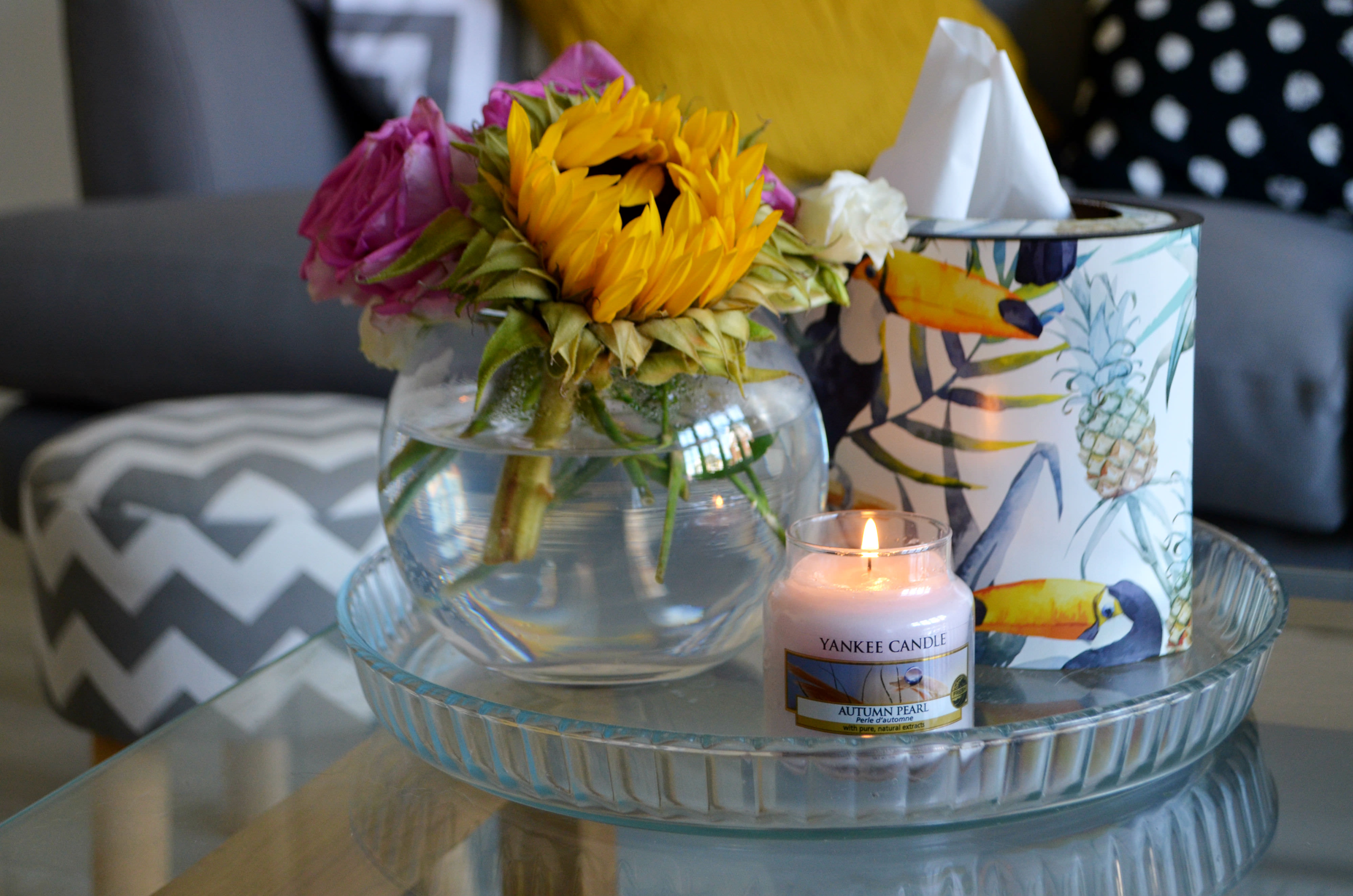 Some of our sofa cushions were looking a bit worse for wear, so I picked up these fancy  grey chevron ones from Tesco for £7 each, and I didn’t even realise until I got them home that they perfectly match our little footstool.  I also re-purposed this massive pirex pie dish and turned it into a little tray for the coffee table.  It’s nice to have somewhere to store lounge bits and bobs like flowers, tissues and candles.  Speaking of which, I’m absolutely loving this little Autumn Pearl candle that Yankee Candle Cardiff kindly gifted me.  It’s from their new autumn range and smells absolutely gorgeous – it’s getting me all excited for cosy nights in. 🙂 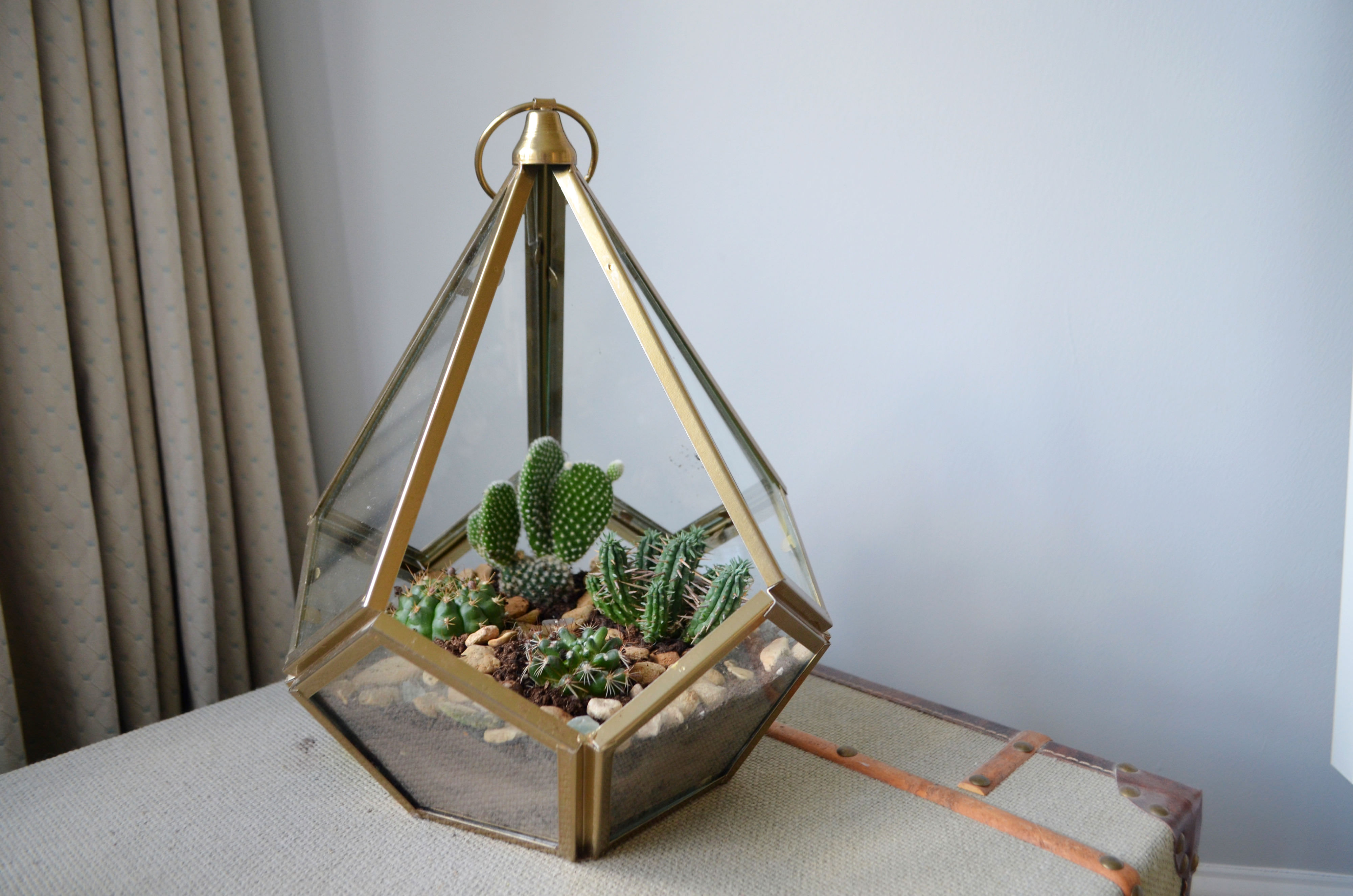 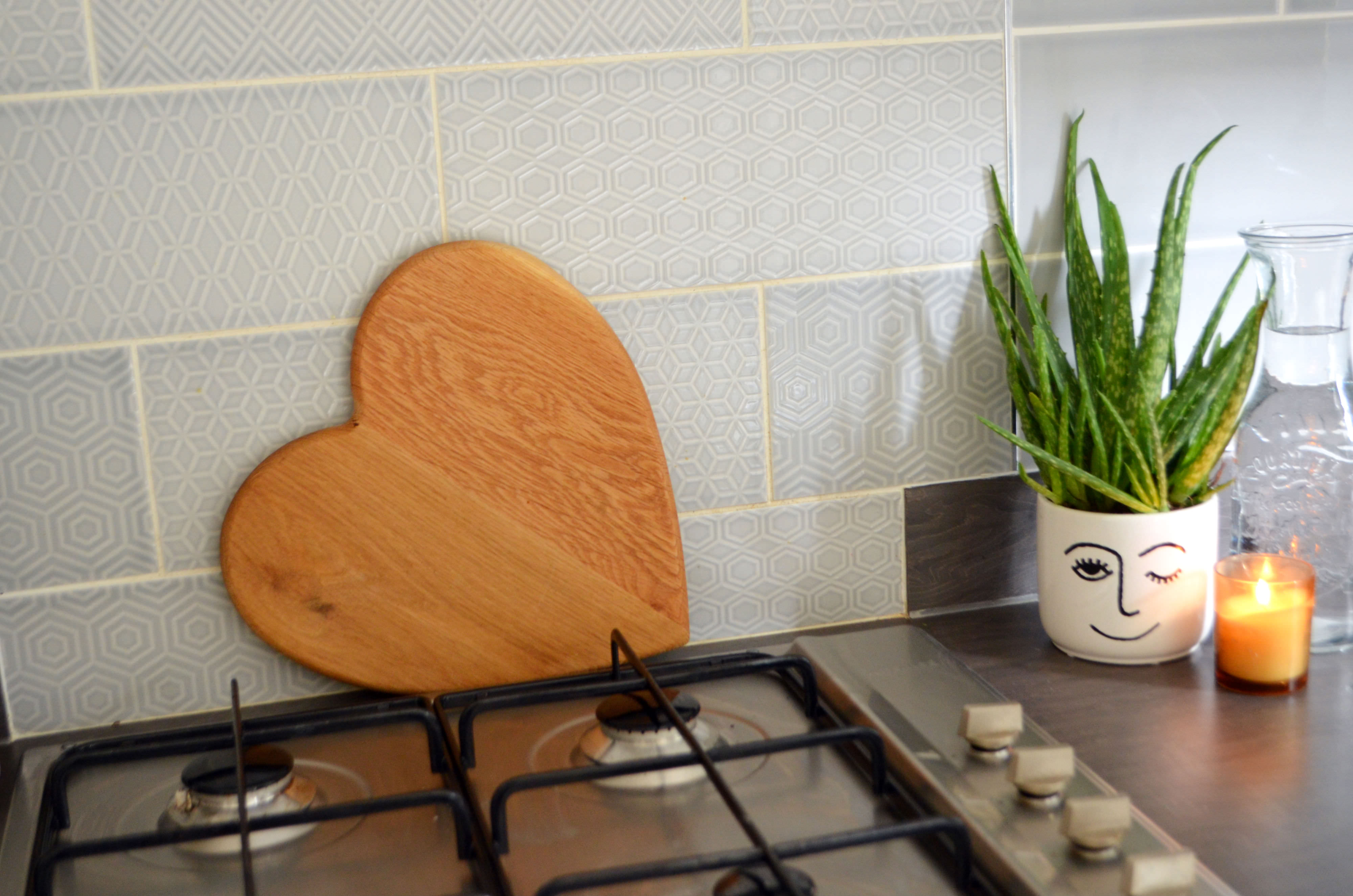 Lastly, in the kitchen I’ve added a few bits and pieces around the hob.  Sunny and I made it to our fifth wedding anniversary at the end of August and so my mum and dad bought us this heart-shaped chopping board – because wood is the traditional gift for a fifth wedding anniversary. 🙂 I also picked up another plant (again, I’m really going to try not to kill it) because it’s nice to have some greenery inside during the winter I think.  She’s called Vera and the pot was a total bargain from TK Maxx.  Cute, huh? 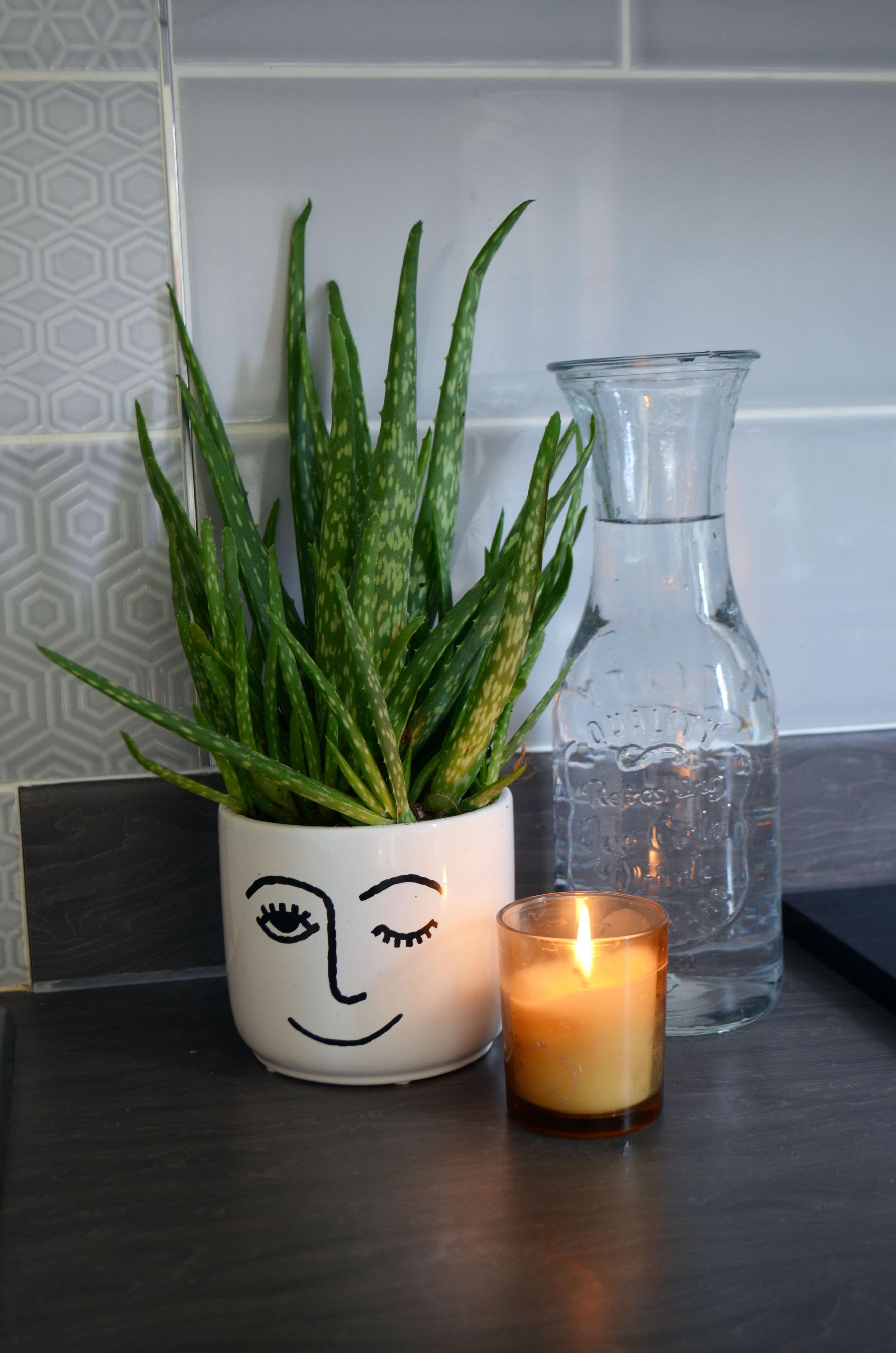 Have a great weekend everyone! ♡

Oh your home looks so cozy! I love all the little details and I can’t wait to decorate mine ^^