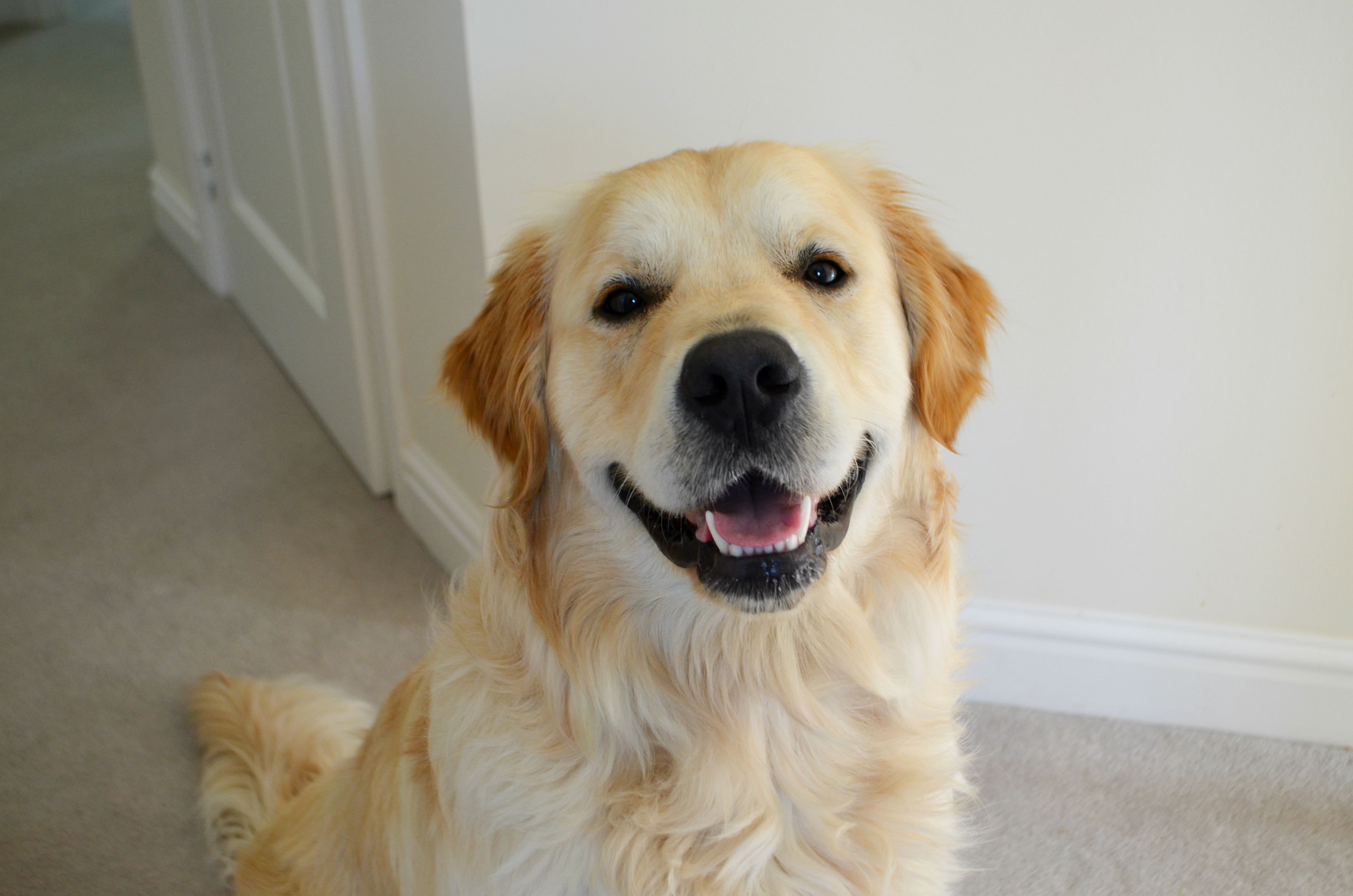 It’s been a while since I spammed you with snaps of Bungle, and what better way to do it than to tack on a list of ten items that – as a dog mama – I seriously couldn’t live without.  Paw-renthood has had a pretty steep learning curve for us; Sunny had never had a dog before and neither had I, and we both come from families with two very houseproud matriarchs.  So we pretty much had to figure things out for ourselves from the get-go.  Thankfully, a year on and we’ve finally settled into a bit of a groove in large part thanks to these fantastic bits and bobs. 🙂

Not all dogs shed, but Bungle does – and we soon worked out that our old Henry Hoover just wasn’t cutting it when it came to sucking up the balls of Bungle fluff that roll across our hard floors like tumbleweed.  Not only that, but it was a bloody nightmare getting it out of the cupboard every day and then putting it away again.  So, about six months ago we bit the bullet and bought a very fancy Dyson V8.  WHAT. A. GAME. CHANGER.  Honestly, they’re expensive – yes – but 100% worth it (Although I’m sure there are some great cordless dupes out there).  They’re powerful, roll over hard floors and carpets like a dream and – perhaps more importantly – they’re easy to use; no fussing with cables and lugging a heavy unit around.  It makes keeping on top of the shedding so easy. 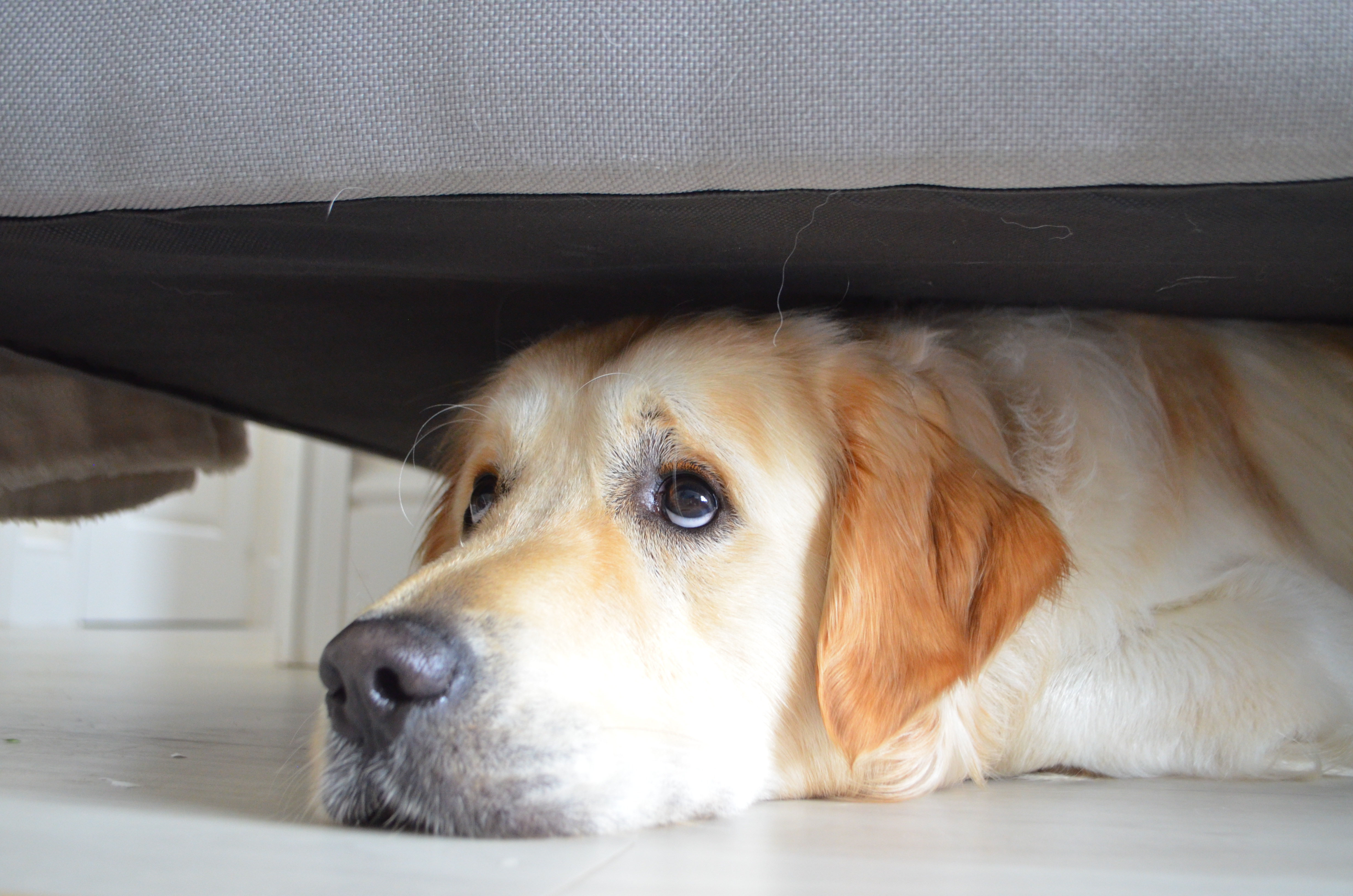 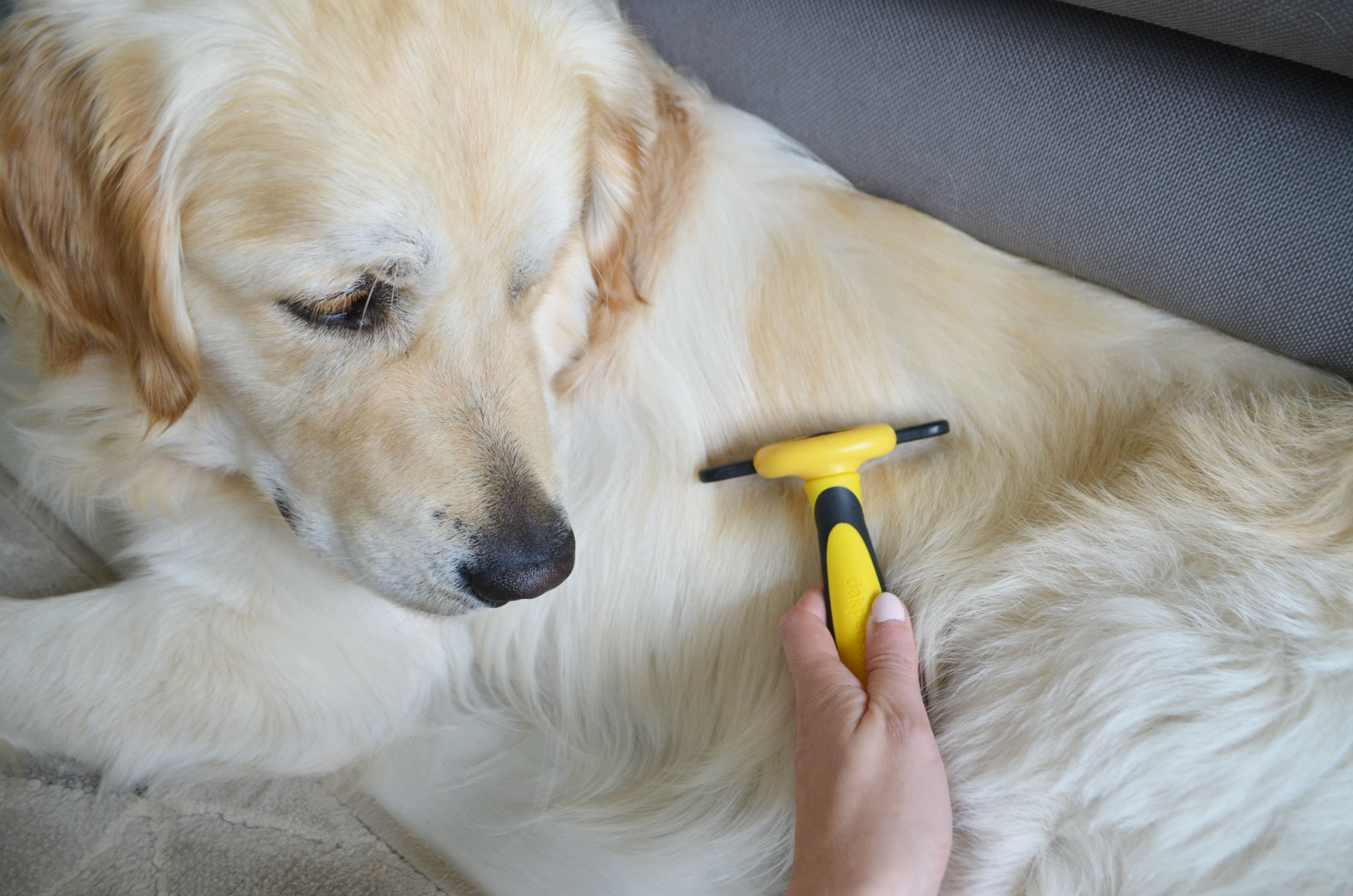 Another must-have for fluffier breeds!  When Bungle started shedding his puppy fluff, we soon worked out that the standard grooming brush was – surprise, surprise! – just a brush, and wasn’t doing anything to actually remove all the dead dog hair that ends up floating around the floor.  So, we picked up this de-shedding brush from Amazon which cuts through all the dead hairs and therefore prevents further shedding (which means less vacuuming!). 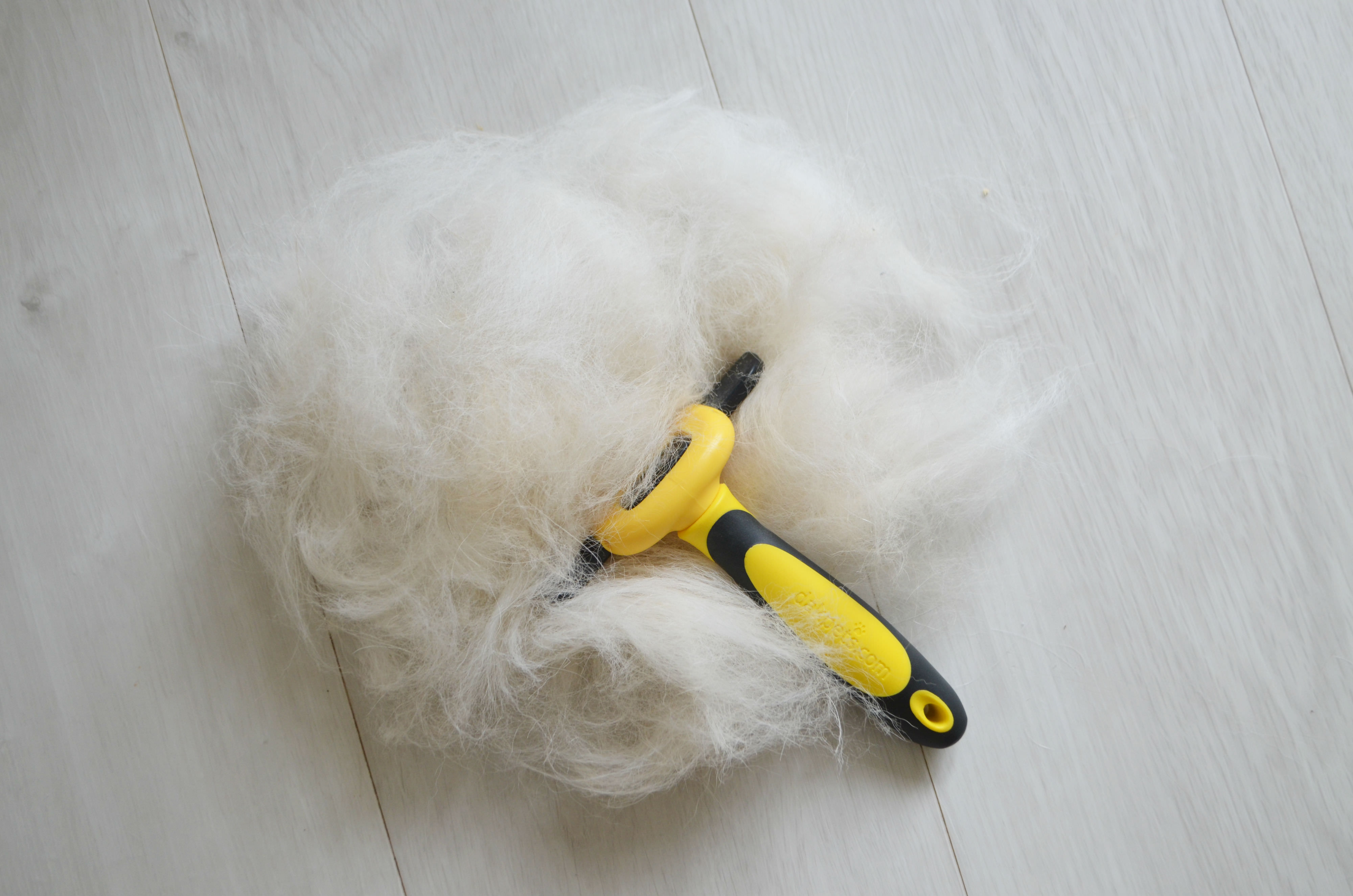 I miss those days where I could just hold Bungle on my lap in the car; we outgrew them pretty quickly!  Bungle’s not great in the car, he gets sick easily (he once threw up out of the window and pebble-dashed the back of our car AND the one behind us…), he struggles with unpredictable twists and turns and insists on having his head out of the window.  As well as a pet blanket for the back seat, we also bought a black hammock that loops over the back and front headrests; it primarily protects the car seats but it also creates a comfortable, secure space for big dogs to sit (and isn’t too affected by the car’s movement).  Because Bungle likes to stick his head out of the window we bought a belt to secure him in; it clicks into a seat-belt plug and then clips onto Bungle’s harness and stops him from jumping out of the window… which he would if he could! 🙂 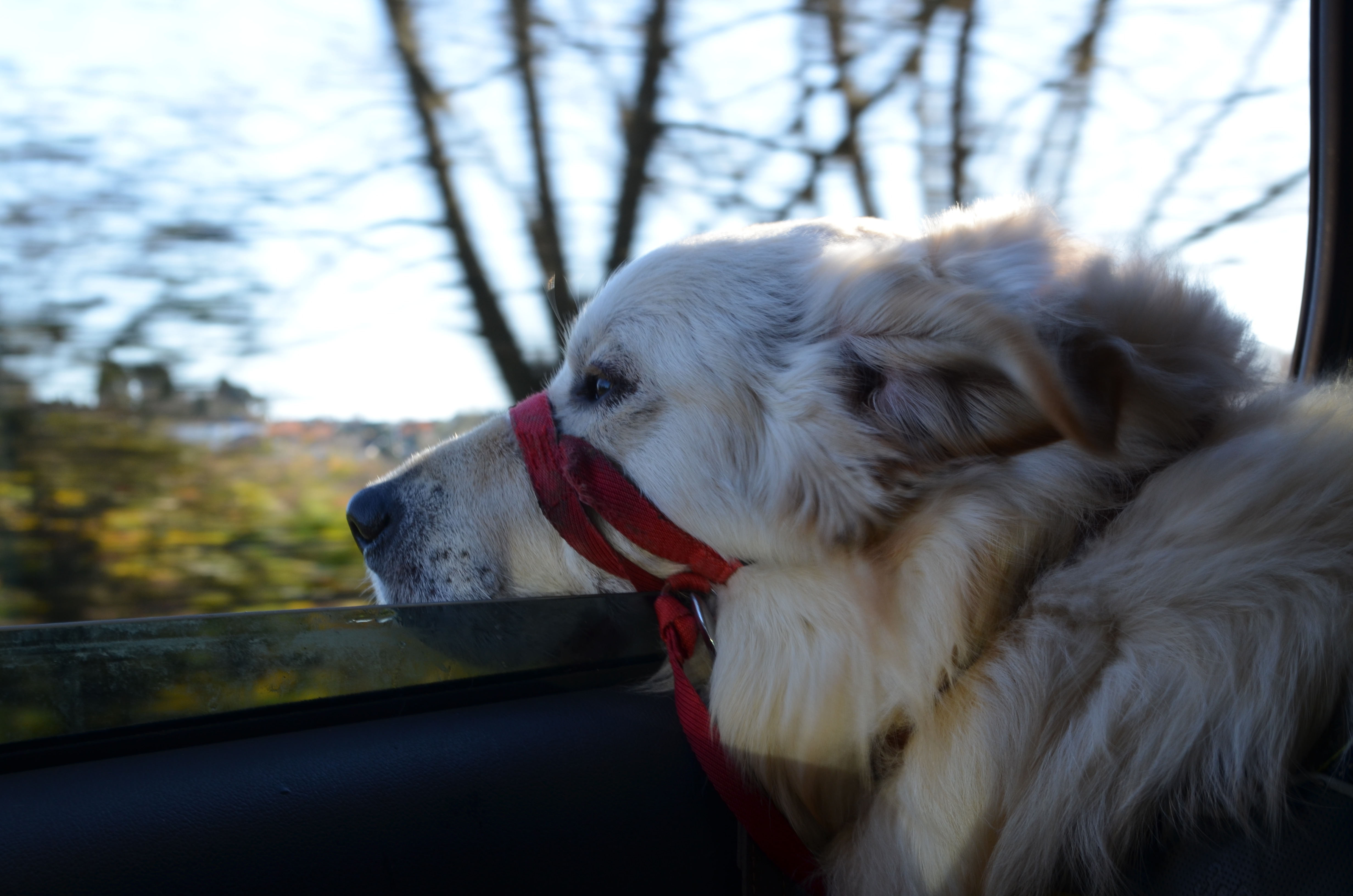 Bungle loves rolling in muddy puddles and living in Wales, wet walks are part and parcel of the whole dog ownership gig.  Luckily, we’ve got hard flooring downstairs so in theory it should be easy to clean up after him.  In the beginning we’d wipe Bungle’s paws and body with a towel to try and clean him off after wet walks, but it was such a pain and didn’t really work.  And – like our old vacuum cleaner – my old vileda sponge mop and bucket just weren’t cutting it when it came to removing mud and dust from the floor.  We picked up a steam mop a couple of months ago and I absolutely love it.  It uses plain old water and comes with two pads that you can just throw in the washing machine once you’ve used them.  Plus, when I wash them with fabric softener, the scent after mopping the floors is so nice! 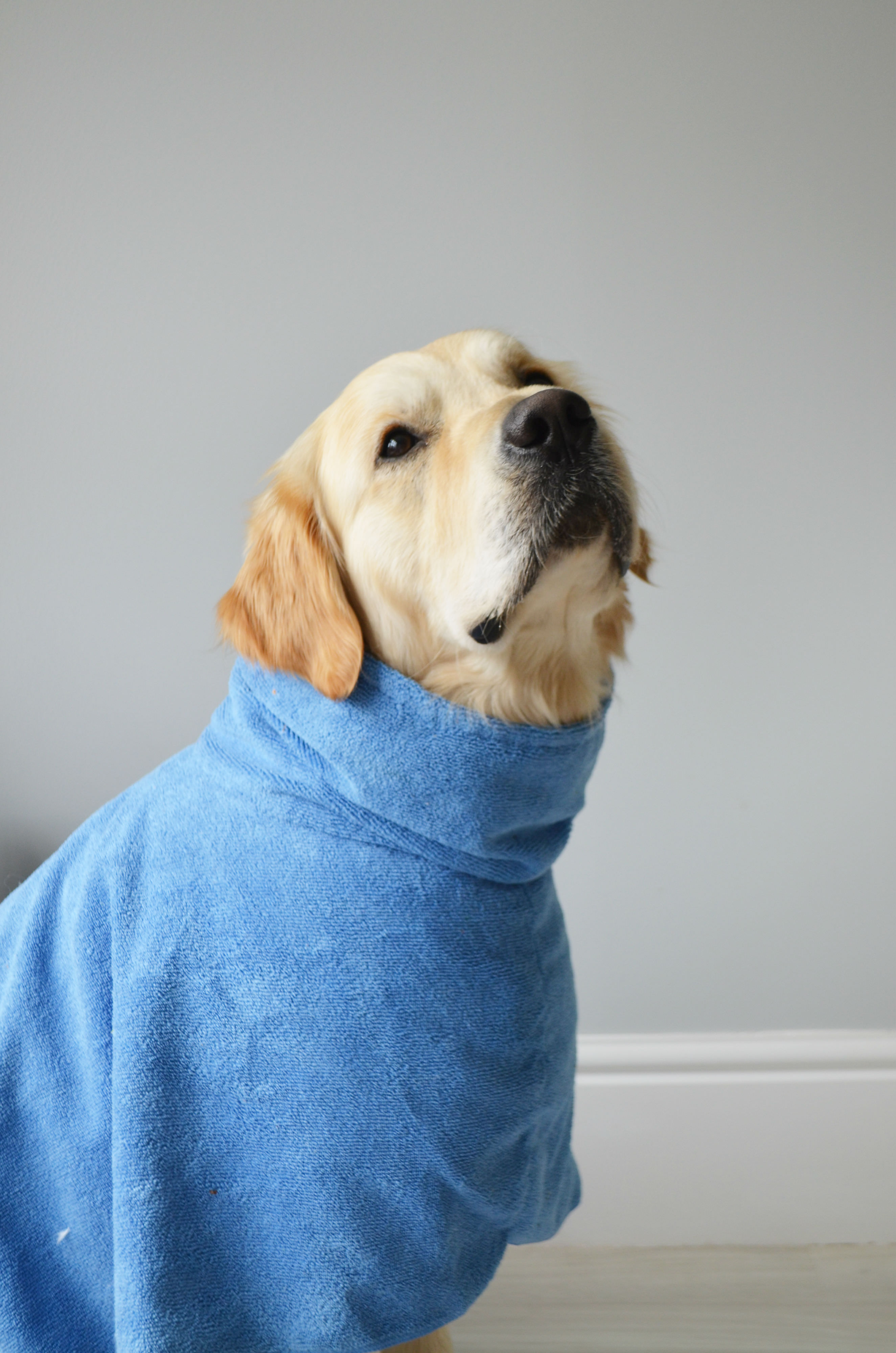 Sticking to the whole Wet Dog theme, here’s a great product tip we picked up from a couple of fellow Golden Retriever owners we bumped into on Barry Island.  If you’re fed up of trying to quickly throw a towel over your dog before they shake water and mud up your walls, then you need one of these babies.  Drying Jackets are not only hilarious (they’re like hoodies for dogs), but they work like a dressing gown.  You put them on when they’re wet and the fabric absorbs all the water in their fur, but more importantly, when they shake off, it catches everything.  Bungle loves his, in the winter he loves falling asleep in it.

Bungle’s got plenty of toys that he loves (and loves destroying – like the squeaky lion that he’s slowly balding and the duck that he’s decapitated several times…), but none are more useful than the ones that keep him busy!  We’ve got a Kong that I stuff with yoghurt, banana and cheese and then freeze, and a ball that releases treats gradually, but my favourite one has to be this snake toy I picked up in Home Bargains.  Taped up cereal boxes full of treats also do the trick (as long as you don’t mind clearing up soggy bits of cardboard afterwards…!). 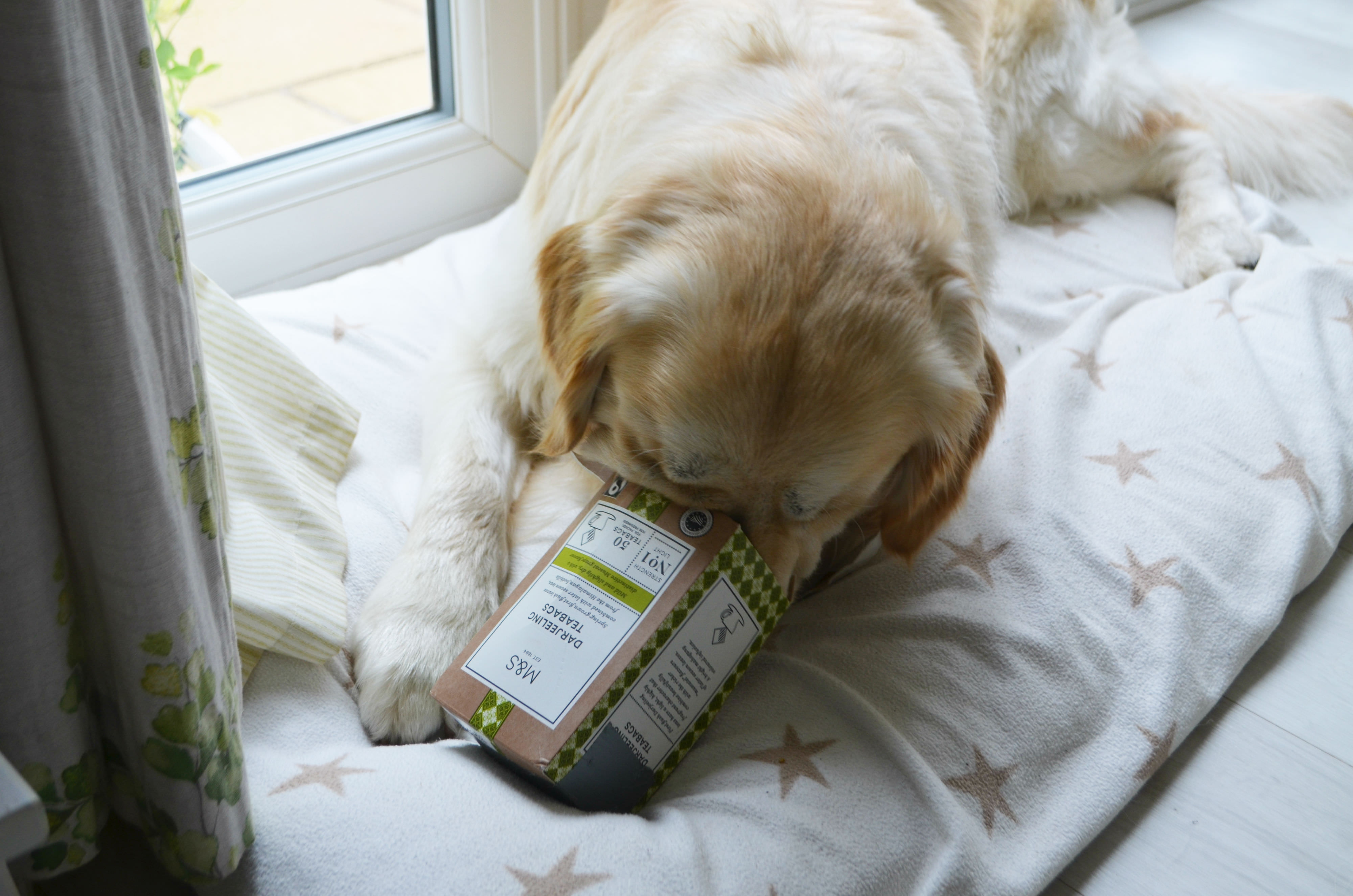 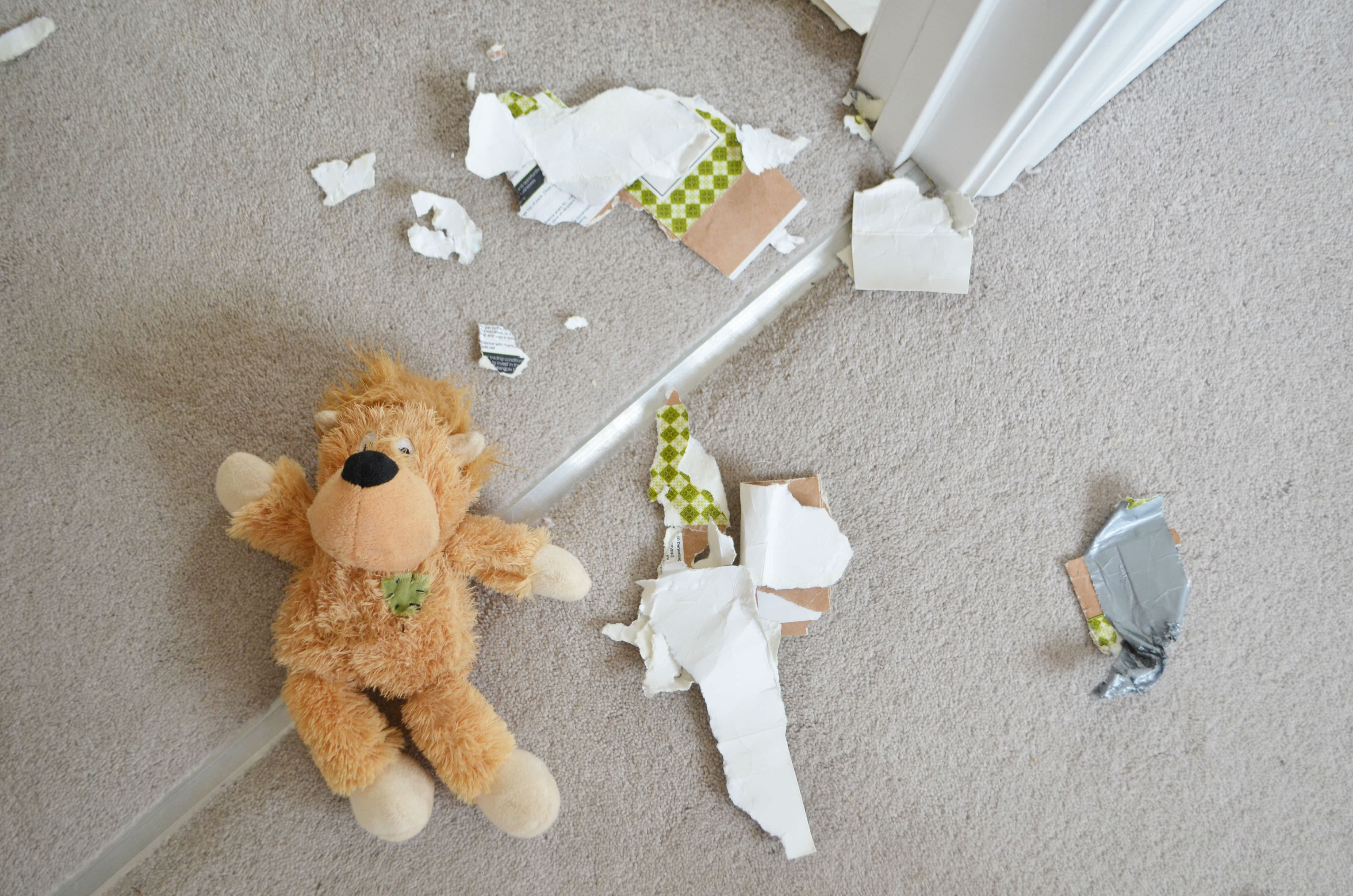 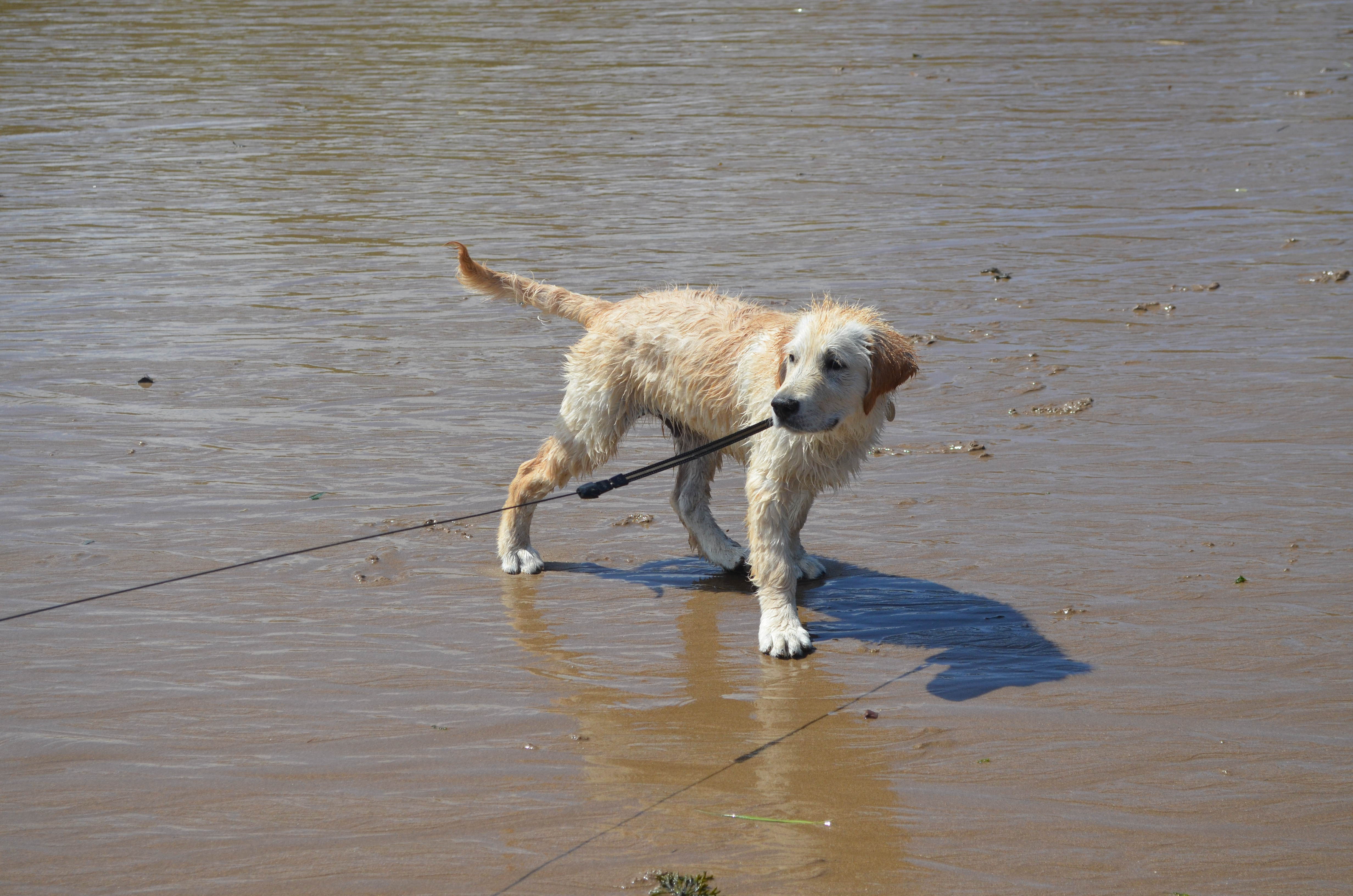 7. The Right Collar and Lead

This is one that we’re still trying to work out!  We’ve tried so many different types of lead and Bungle seems to be stronger than all of them.  We started off with a harness, but that didn’t work and it only seemed to make him stronger (we still use the harness when we’re out and about and in the car, but not while walking).  Then we tried extendable leads, and he snapped the whole lot – even the super strong ones.  That was fun!  And then we tried a super strong bungee lead… which again, he snapped.  He actually broke the metal clasp.  So… we moved on to a Halti which loops around the snout and is supposed to stop dogs from pulling.  Basically whenever Bungle tries to pull us across the street to say hello to a dog/human/cat/squirrel/moving leaf that he’s spotted, it pulls his face to the side and prevents most of the pulling.  It worked to begin with, but Bungle’s got a strong neck and seems to have worked out a way around it – to everyone’s surprise.  So next we’re moving on to something similar called a Canny Collar which pulls his nose up when he pulls instead of to the side. 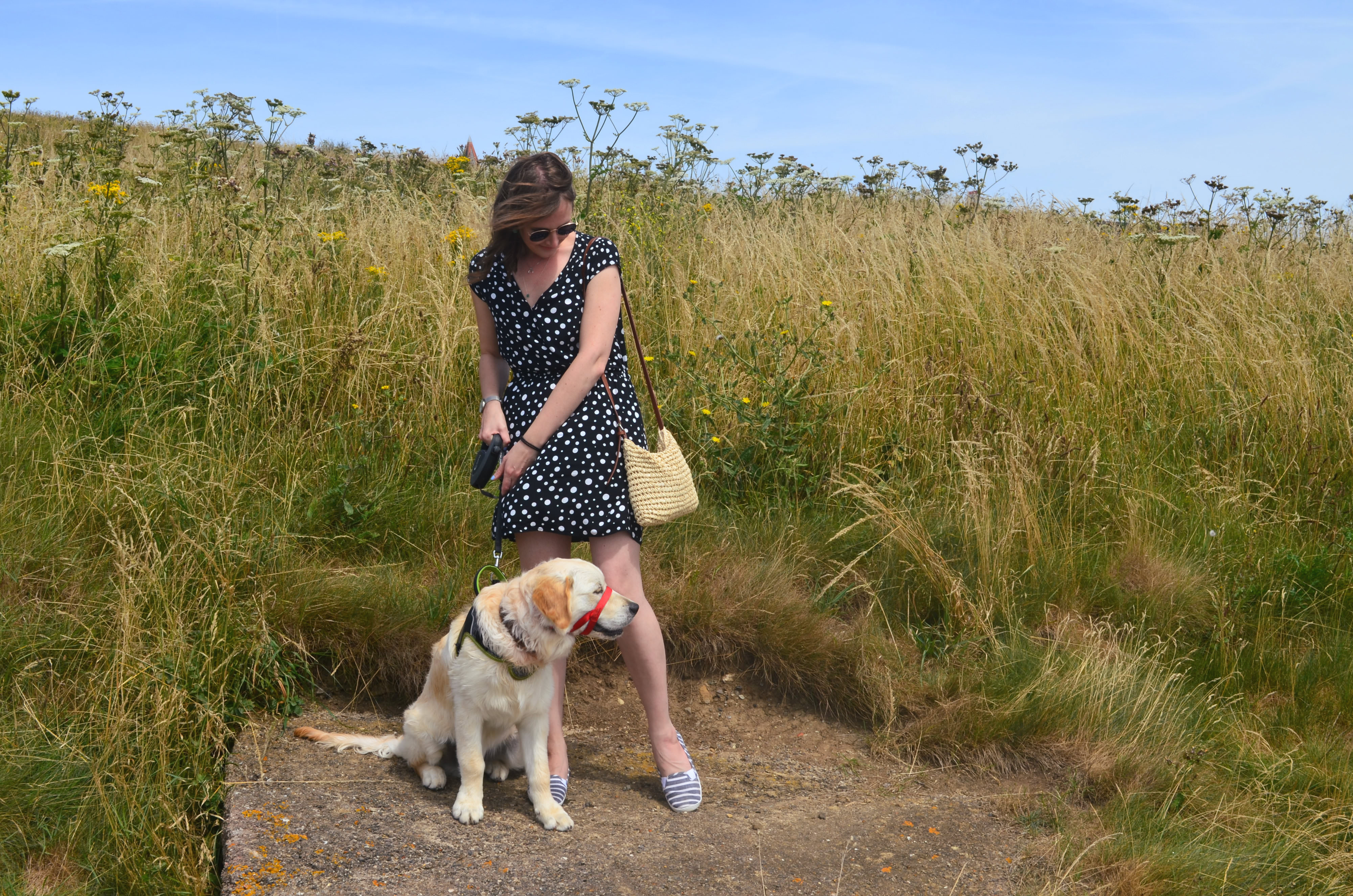 I know, it sounds ridiculous – but stick with me on this one!  Honestly, it hadn’t even occurred to us to buy a nanny cam for Bungle, but my Mum and Dad were thinking five steps ahead of us (parents, they think they’re so smart… and they are!) when they bought it as a Christmas Present.  It’s basically a live camera that you can tune into through WiFi at any time via an app on your phone.  We installed it in our kitchen on top of our extractor fan and were absolutely amazed at the quality, even at night.  It gives us peace of mind whenever we leave Bungle on his own; when we’re out and about we can tune in and see what he’s up to (/see what he’s destroying).  Now we don’t feel like we have to race back.  There are loads of brands out there, but we’ve got this one.

Bungle rarely has an accident inside these days, but we still use all the toilet training bits and bobs we picked up in the beginning pretty much every day.  Wet Wipes are always handy for cleaning paws and ears, and Puppy Pads are great to put on the door mat in the winter to dry off wet paws (the largest and cheapest puppy pads can be found at Home Bargains 😉 ).  A good Stain Remover is a MUST.  This one is our go-to; not only did it completely remove a massive diarrhea poop stain from a pale carpet without trace (Bungle’s allergic to chicken and we definitely found that one out the hard way), but it’s also a must-have for toilet training as it blasts urine stains, gets rid of the odour and prevents repeat marking. 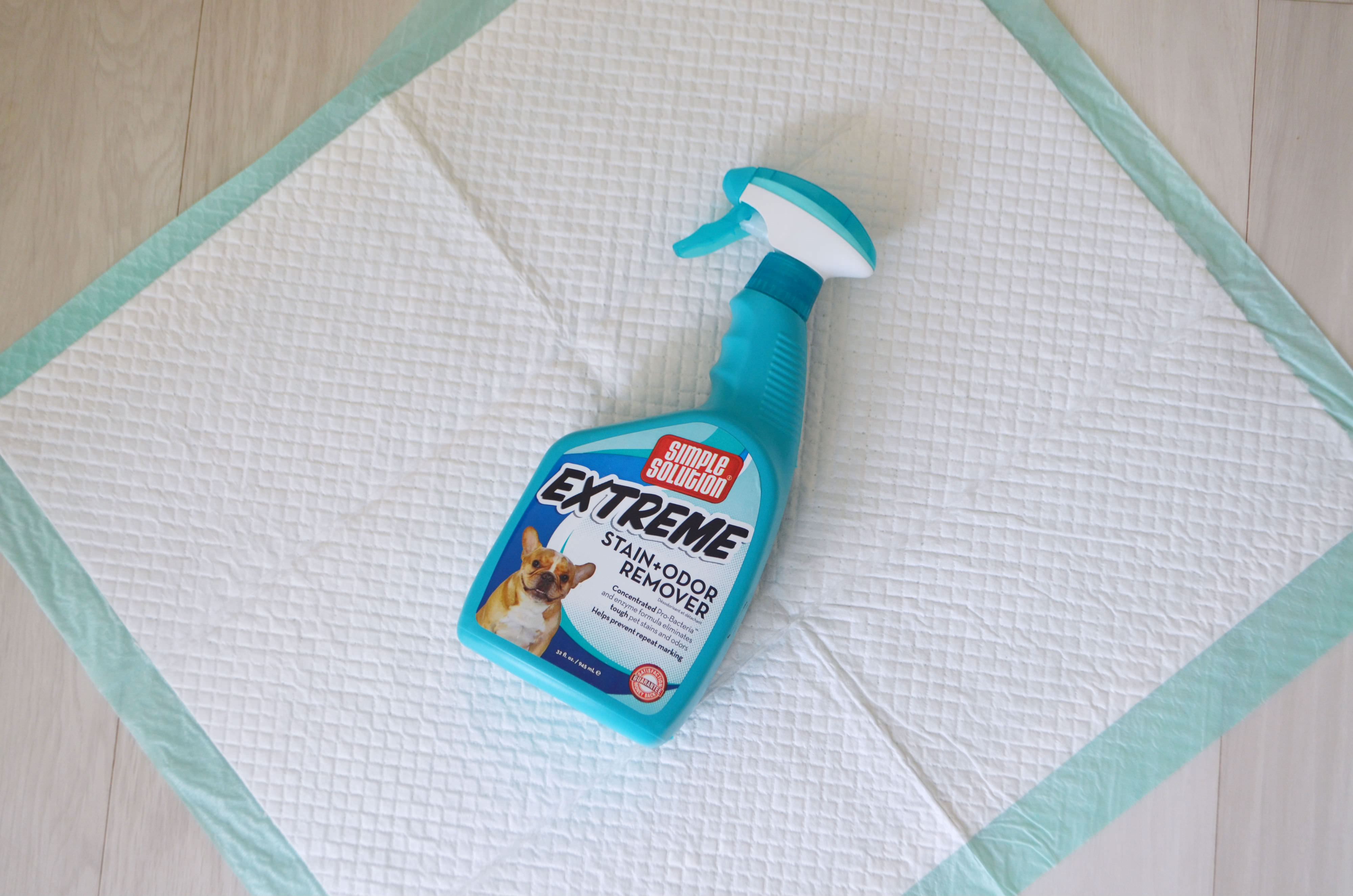 Cafes and outdoor spaces around town are becoming more dog friendly these days, but you just can’t guarantee you’re going to come across a water bowl when you’re out and about.  We picked up this travel bottle which comes with a attached plastic trough for easy water breaks on the go.  It is a bit clunky and I’m sure there are more compact versions, but this one works well for us.

Dog owners, what are your holy grail items?  What’s your dog’s favourite toy?  Let me know! 🙂

Bungle! Oh my gooood he is gorgeous. The picture of him on the beach has me dying. I have two black labs and they are the absolute lights of my life. Since it’s been super hot here, we’ve got them these Cool-dog bandanas that keep them nice and cool in the sun. My boys love a good kong to play with, and a travel water bottle in this heat is essential. My older one is almost 14 so for the winter he has a nice little winter jacket to go out in haha!

Oh those bandanas sound fab – Bungle’s got so much fluff that he really struggles in the heat so I’ll have to check them out! 🙂