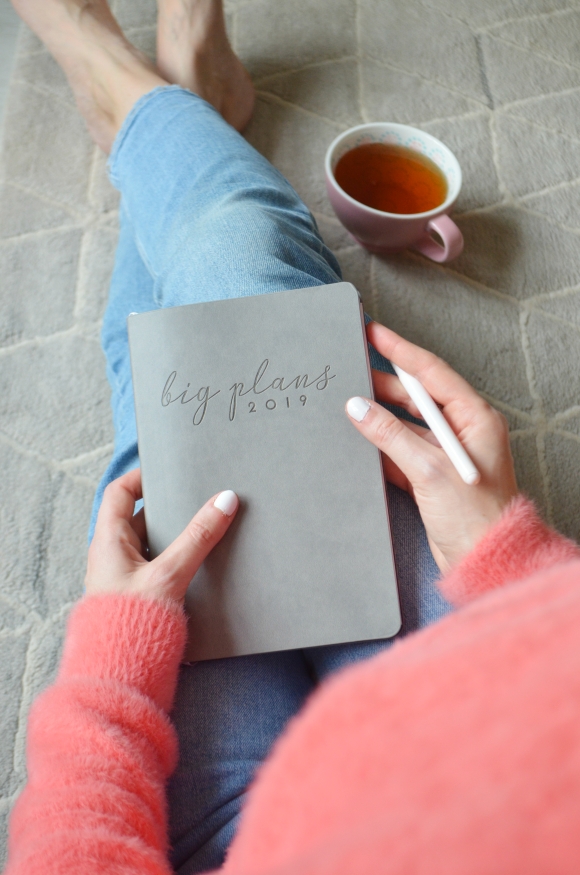 Happy 2019!  I’ve gotta admit; it feels pretty good to be back in the swing of things (even if the first thing I marked in my brand new diary was a dentist appointment for today – the most Monday-est of Mondays…).  To be completely honest with you, this post was supposed to be a recipe for Thai Noodle Soup, buuuuuuut the truth is that I spent a little too much time on the sofa during the Crimbo Limbo scoffing cheese and chocolate and binge-watching “You“ on Netflix instead of prepping Blog Posts.  NO REGRETS.  You’ll just have to stay-tuned for that recipe, but until then how about a good ol’ chin-wag about Resolutions instead?

For the record, I’m not a fan. I’m a pantser not a planner by nature with absolutely zero willpower (see Netflix and Chocolate binge above and the fact that I bought a five pack of jam donuts this morning ten minutes after my dentist appointment…) and so the prospect of waking up on the 1st of January a new and improved version of myself complete with a laminated list of goals for the year ahead in hand is not only enough to bring me out in a cold sweat but absolutely and completely bonkers.  For a start, I’m lucky if I even get out of bed on the first day of January, and who the hell wants to pile that kind of pressure on top of themselves on the very first day of a new year anyway?  It’s so easy to make those ambitious, slightly vague statements on New Years Eve with a glass of champagne in hand, isn’t it? Before you know it, it’s February and – just like the champagne – you’ve lost your fizz and all your grand plans have fallen flat.  That’s resolutions for you.

But hey – despite all of that – I still can’t resist that squeaky clean, brand spanking new, fresh diary feeling you get at the very start of a new year. Of course, there are a few things I’d like to change and try my hand at this year, but instead of making resolutions, I’m making new habits.

Why? Well, the problem with resolutions is that they’re usually a bit vague (I’m going to lose weight, I’m going to save more money) and/or a bit extreme (I’m never eating dairy again, I’m going to read 50 books) with no realistic plan in place to actually achieve them.  They demand perfection without a blink at the planning and hard work that needs to be put in; so it’s really no surprise when we flunk out come February. Habits on the other hand, are specific changes in behaviour that need a bit more thought and planning to put into practice.  Habits become a part of your daily routine – you have to actually make time for them – and so they’re much trickier to break and a more realistic way to achieve a new goal.  They’re more about the long road to perfection than perfection itself.

RESOLUTION
“This year, I’m going to get fit.”

HABIT
“This year, I’m going to go to Pilates class every Wednesday night at 7pm.”

RESOLUTION
“This year, I’m going to find a new job.”

HABIT
“This year, I’m going to spend an hour every Tuesday night between 8 and 9pm applying for jobs.”

See what I’m saying? Think of it this way; the resolution is the goal, the habit is the plan you’re going to put into place to make sure you achieve it! …Or that’s the idea, anyway. 😉

So, which resolutions am I hoping to turn into habits in 2019? Honestly, they’re all really boring! Firstly, I want to read more books (she says, for the third year running… resolutions, ugh!); I love reading, but I’m terrible when it comes to making time for it. So this year I’m scheduling in an hour of reading time every day between 5 and 6pm. Be there or be square! Secondly, I want to add some more recipes to my midweek meal repertoire, especially some healthy ones. I’ve got a handful of go-to recipes that I’m getting bored of making all the time, so I’ve decided that I’m going to make it a new habit to spend an hour every Sunday researching a brand new recipe to cook for dinner during the week. And thirdly, I want a cleaner house (See? I told you they were boring!). Just before Christmas it became very clear that my old cleaning routine just wasn’t cutting it (the whole house was pretty much buried under a layer of Bungle’s fur…), so this year I’m going to try and set aside an hour a day to keep on top of the cleaning, one room at a time.  If I come up with something that works, I’ll let you know.  And that’s it! For now, at least…

So what about you? Are you making any changes this year? Also now’s the perfect time to let me know if there’s anything you want to see more (or less!) of here on the blog in 2019. Let me know in the comments! Hope you’re having a great start to the year! 🙂

15 replies on “Why I’m Making Habits instead of Resolutions”

This was a delightful read! ☺️ Truth he told, I’m not a fan of new year resolutions either so your post was the perfect inspiration for me! Habits I want to work on, like you, is reading more books! Books of different categories! Being a new mum and trying to keep on top of house chores and trying to stay off social media during those moments of peace and quiet, is quite a mission and a half sometimes! So like you, I’ve been trying to read a little each day, wherever and whenever I can, and if I’m unable to do so for one reason or another, I want to try to writing a journal entry instead! So far it’s been going well, I hope I can keep it up! 😅 I’ve also tried borrowing books from the library too, in hope that knowing I have to return it at some point, helps me to be a lil more focused 🙈

Thanks, glad you liked it! I’d like to get back into journalling too – I used to be really good at sitting down before bed to write, but these days I tend to just hit the mattress and zonk out!

That’s a good tip about borrowing books from the library – I’d definitely be a bit more focussed about finishing if I knew I had to take the book back. Plus, Cardiff library is really nice! 🙂

I feel the exact same about resolutions, this year I have made smaller ‘goals’ for the year and then breaking them down to one goal a month that I can turn into a habit, makes sense in my mind anyway ha! I’m being pretty relaxed about it to be honest and hopefully will have an array of achievements by the end of the year!

One goal a month sounds great 🙂 Being relaxed about it is probably the best way to do it – less pressure!

Thinking of resolutions in terms of the habits you need to form to achieve them is such a good idea. It makes them that bit more tangible! I fill my commutes with reading – it’s an easy way to get it in and as a bonus, it makes the commute go a little faster (mine’s a 3h round trip, or thereabouts) 🙂 I just managed to hit my goal of reading 100 books last year, so I was chuffed with that (I was a few short in 2017). This year, I’m aiming to go on a run (any distance, short ones are fine in my books) a week and, like you, keep on top of cleaning by doing a little every day so I don’t end up with a mountain of cleaning at the weekend!

A 3 hour round trip! Wow, that’s a long one; you must get through books in no time!

I’d like to get back into running too, but I’ve no idea when I’d squeeze it in. I was hoping the dog would join in with me, but he tends to just run off on his own instead! 🙂

It’s a bit of a beastly commute at times, but the trains have been more reliable in recent months (at least when compared to the chaos over the summer). Squeezing it (whatever it may be) in is always the hard part! Sounds like Bungle would be taking you for a run if you took him out for one 😅

Binge-watching “You” is definitely time well-spent according to me :). Have you read the book? It’s very gripping as well. You take such gorgeous photos. Would love to see more photography tricks/tips on your blog.

I had no idea it was a book before watching it – now I’m curious to read it. I’ve heard there’s a sequel too!

Thank you! I can definitely look at putting together a post with my photography tips and tricks 🙂

I feel you on this one! I promised myself to better the habits I have and create habits as well. Especially habits surrounding my mental health and writing my dissertation. I love your blog and I’m still obsessing over your Welsh cakes!

[…] you caught my New Year, New Habits post at the start of the year then you’ll know that I’ve been trying to add a few more […]

Love this! Reading more is one of mine too xx

Thanks! It’s so tricky finding time to curl up with a good book 🙂