Okay, let’s be clear; we actually had a grand total of three days in Vancouver (two and a half, really, when you count the fact that we were stuck in immigration for most of the afternoon after we landed).  But, we pretty much explored the whole city in one day and then used our second day to explore North Vancouver – including Capilano and Grouse Mountain (stay tuned for that one…).  Of course, Vancouver isn’t a small city and we were absolutely cream-crackered by the end of the day (maple cream-crackered), but we saw pretty much everything we wanted to see. 🙂 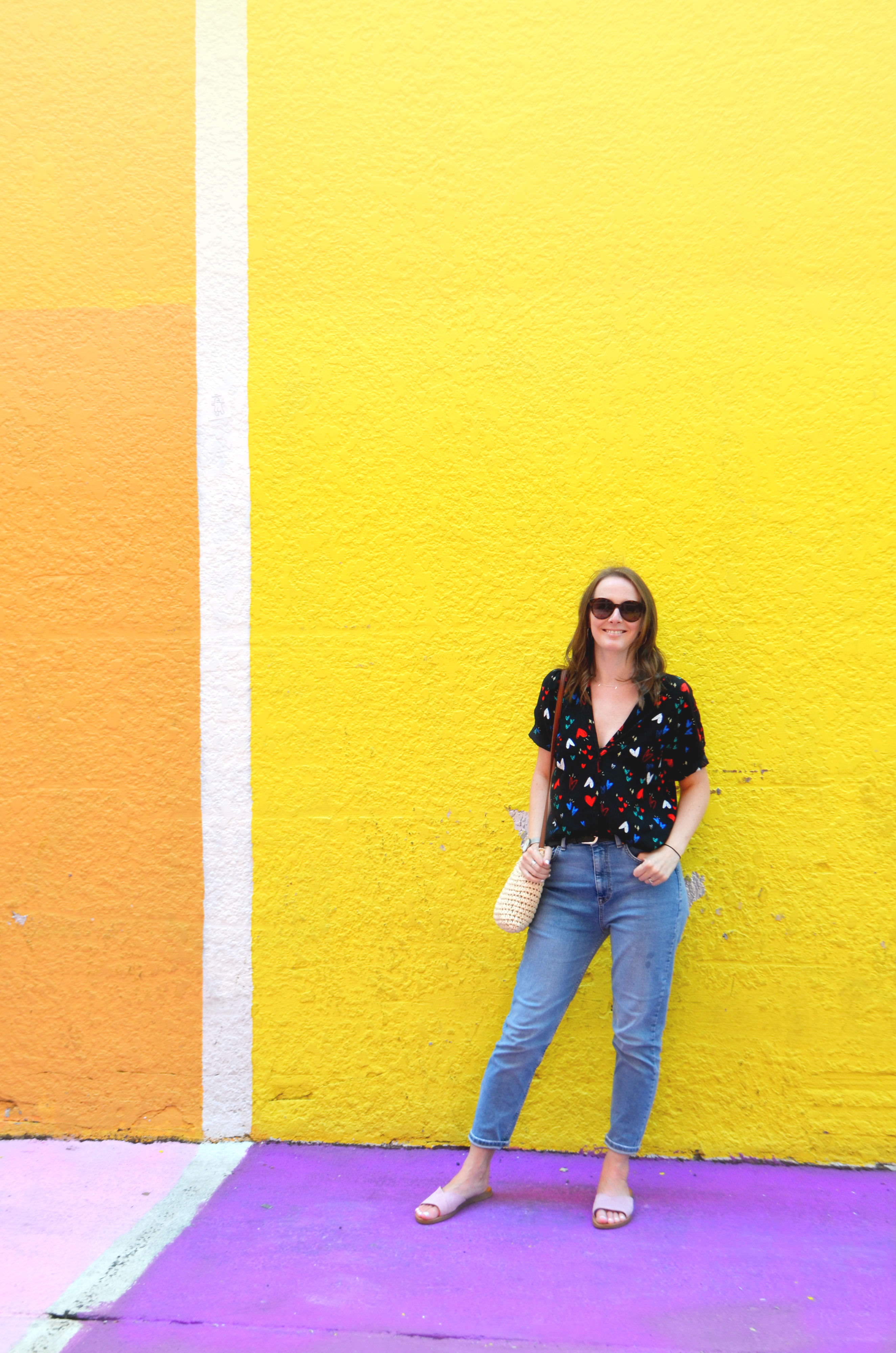 Back when we booked our trip we were stunned by how expensive hotels in Vancouver are and really struggled to find something that wasn’t either horrendously expensive or waaaaay out of the city.  We settled on the Best Western Plus Uptown Hotel, which was just off Main Street in an area called Mount Pleasant.  I’m told by an ex-Vancouverite that it used to be a bit of a run down neighborhood, but recently it’s undergone a bit of gentrification with its mural art, poke restaurants and taco bars.  The hotel was great; especially the crew on reception who were full of insider info and put out fresh drinks at the end of the day for weary, overheated guests to take back to the room.  We weren’t far from downtown but not close enough to walk (especially as there was heatwave on while we were there) and so we ended up using the bus to get around quickly. 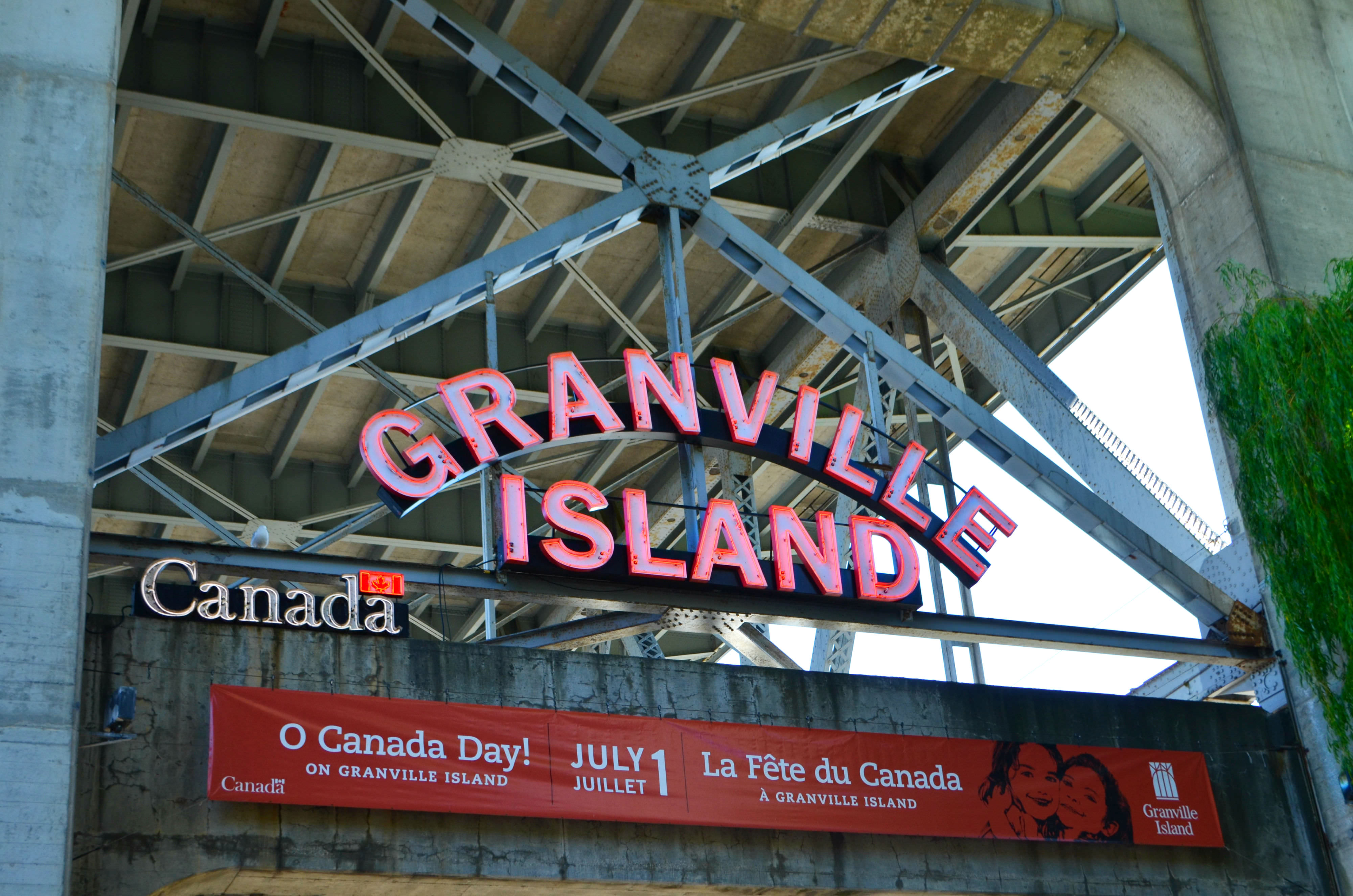 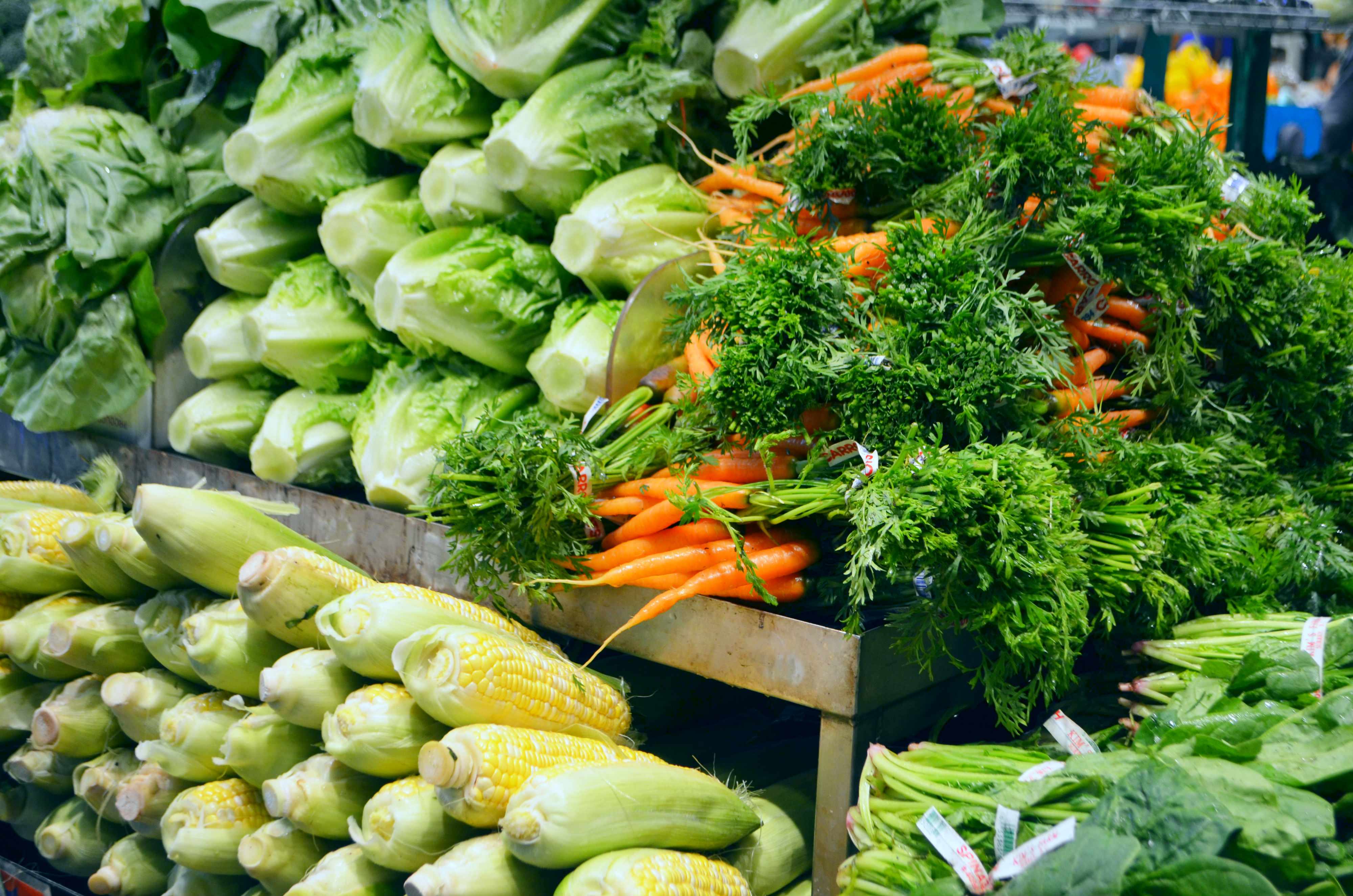 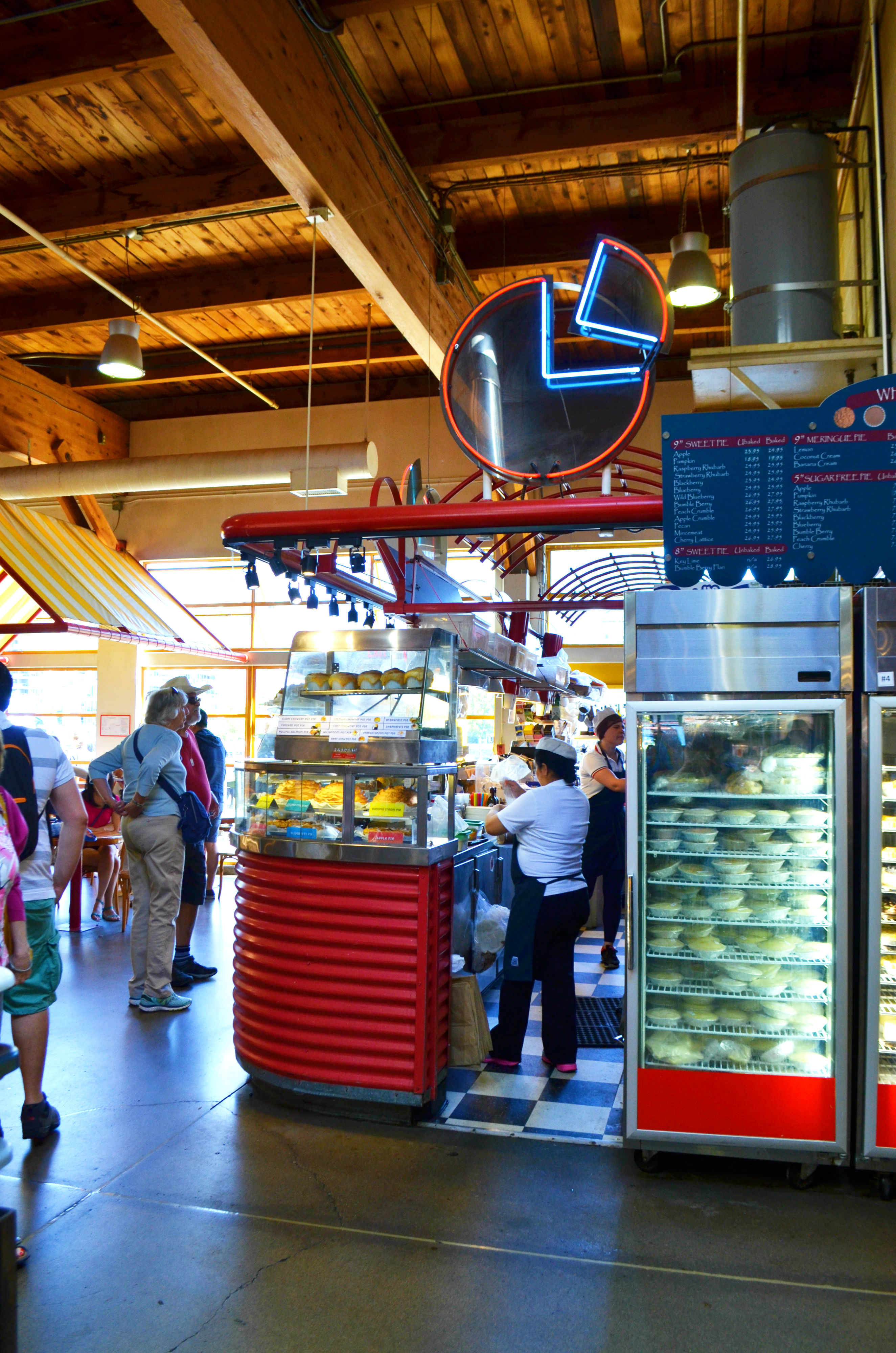 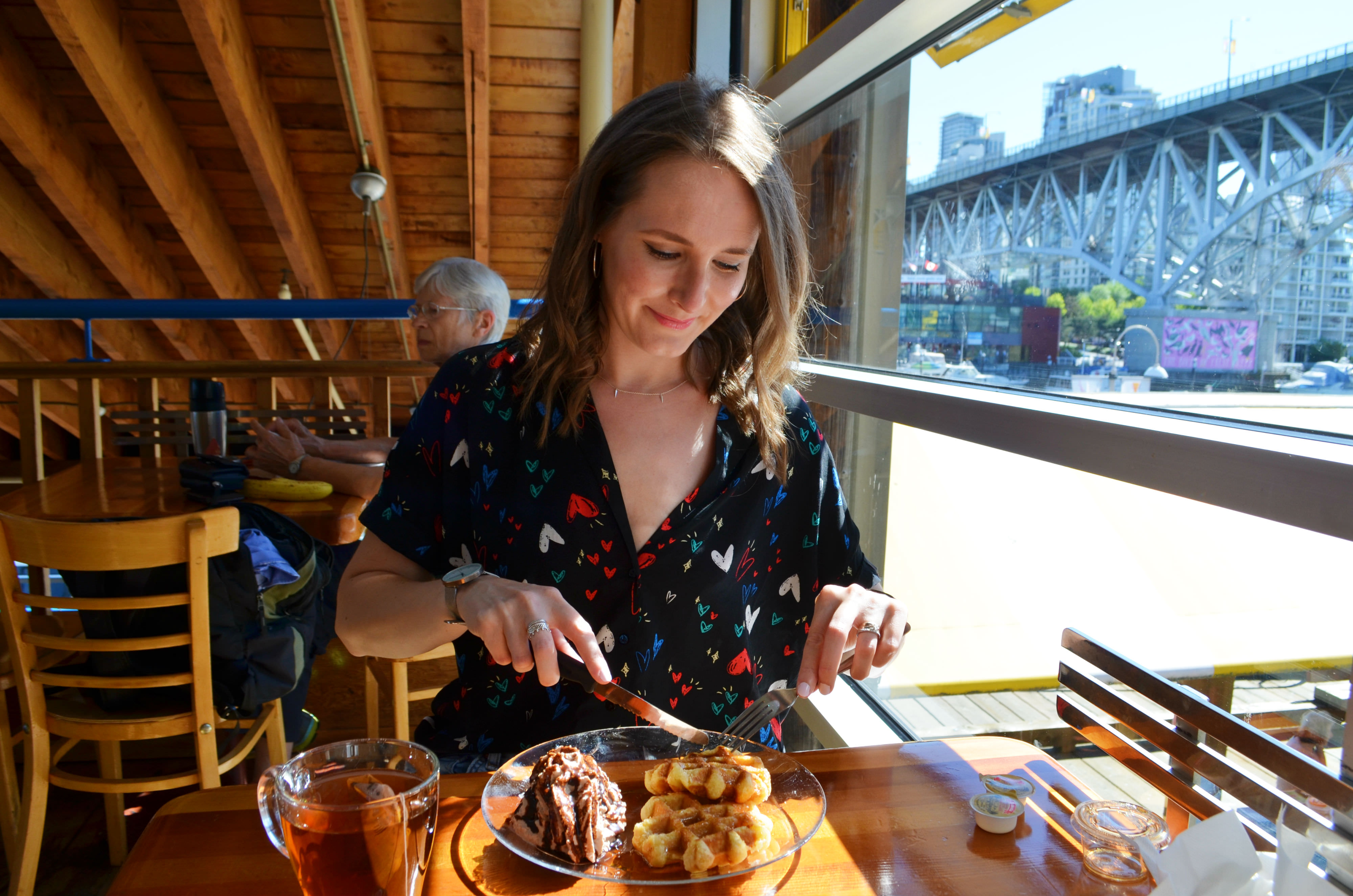 We started off the day on Granville Island, heading over there nice and early for breakfast waffles before all the crowds of other tourists swooped in.  It’s not technically and island but a peninsula wedged between downtown and South Granville and while it used to be full of factories and warehouses, nowadays its home to Vancouver’s Public Market and foodie heaven.  From fruit and veg to doughnuts and bagels, and pies and oysters to clothing and artwork, it’s my number one recommended place to hit up if you’re ever in Vancouver.  We wandered around the stalls, stuffed our faces and shopped for some unique bits and bobs to bring home. 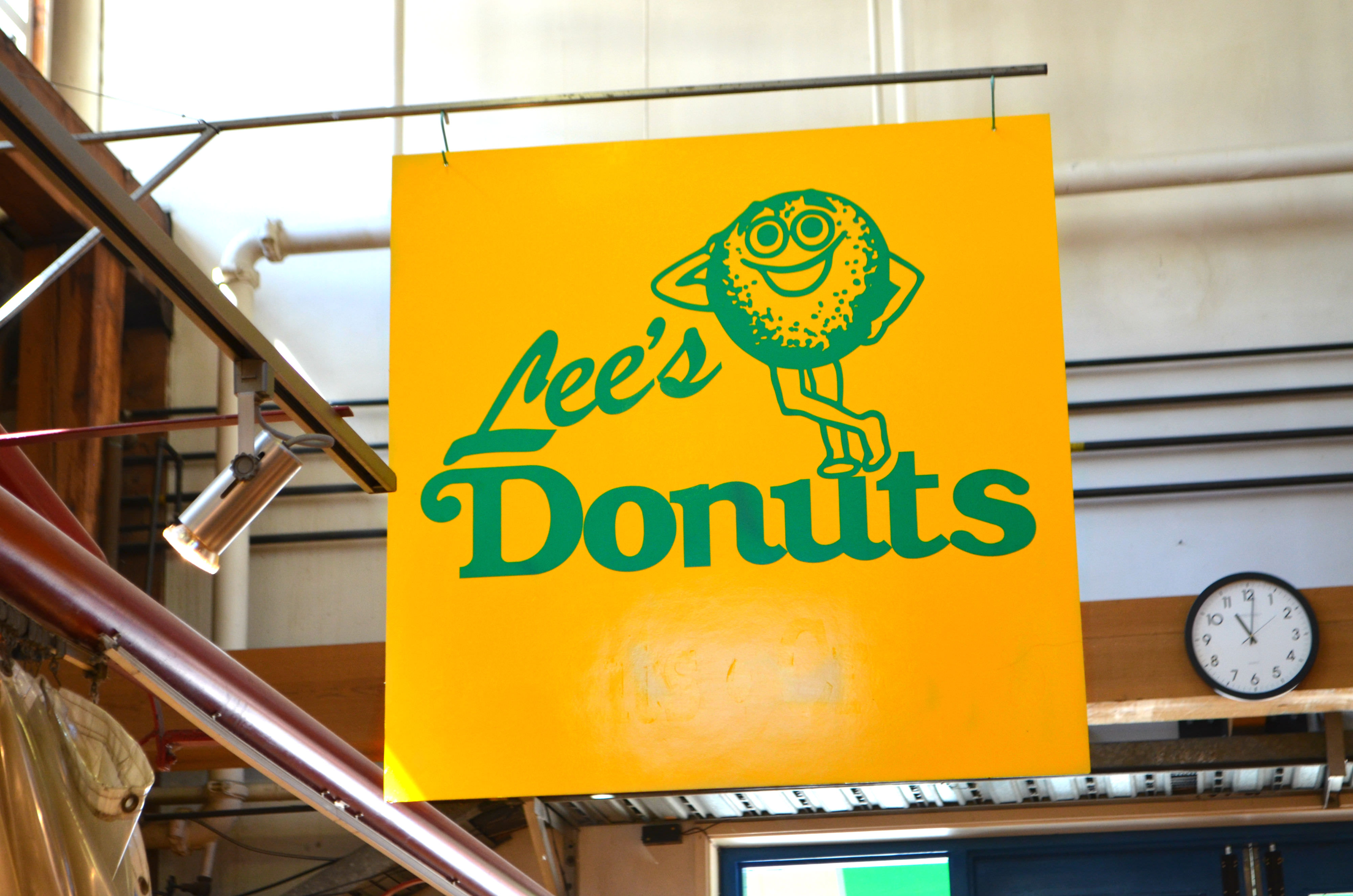 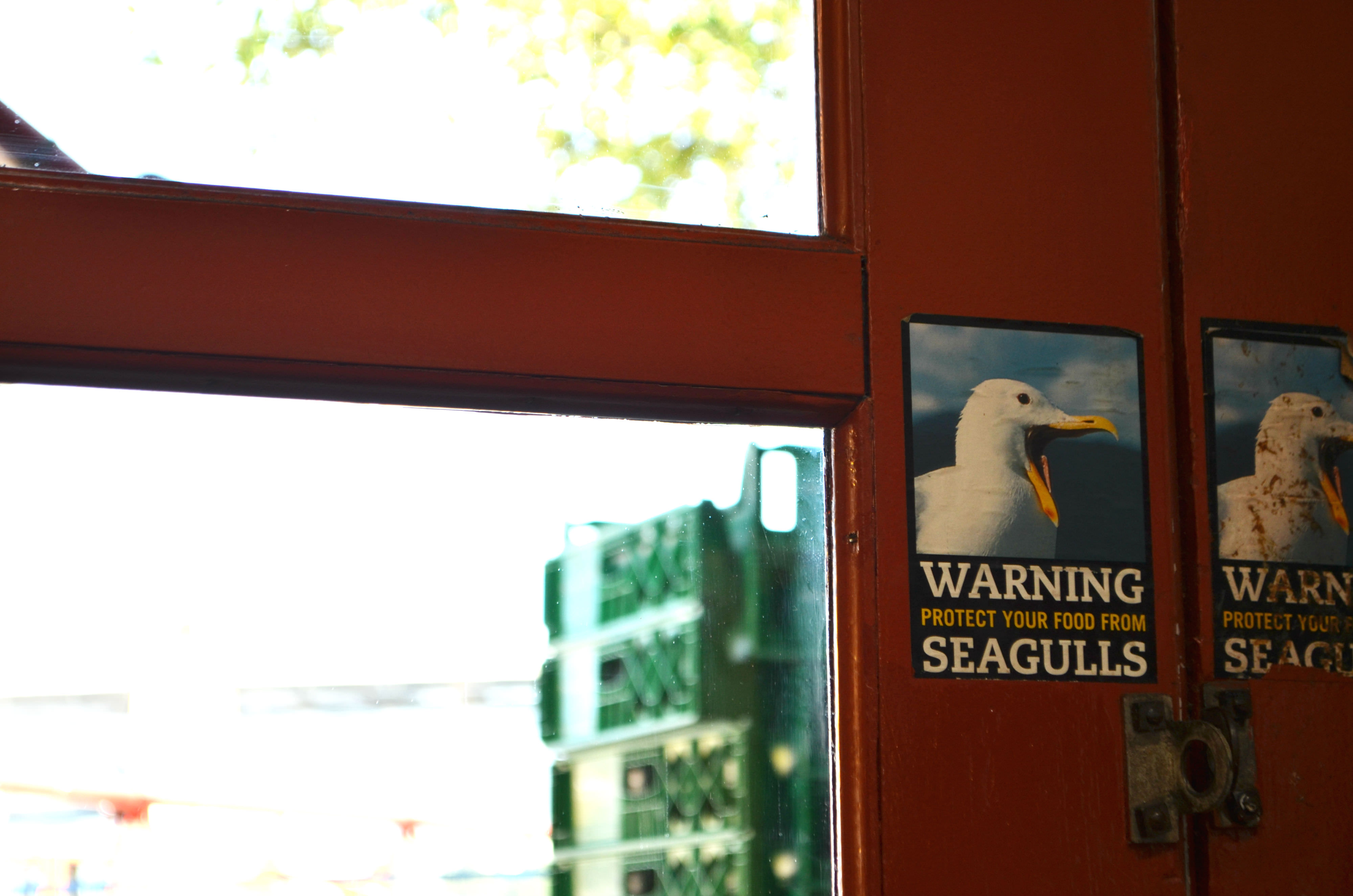 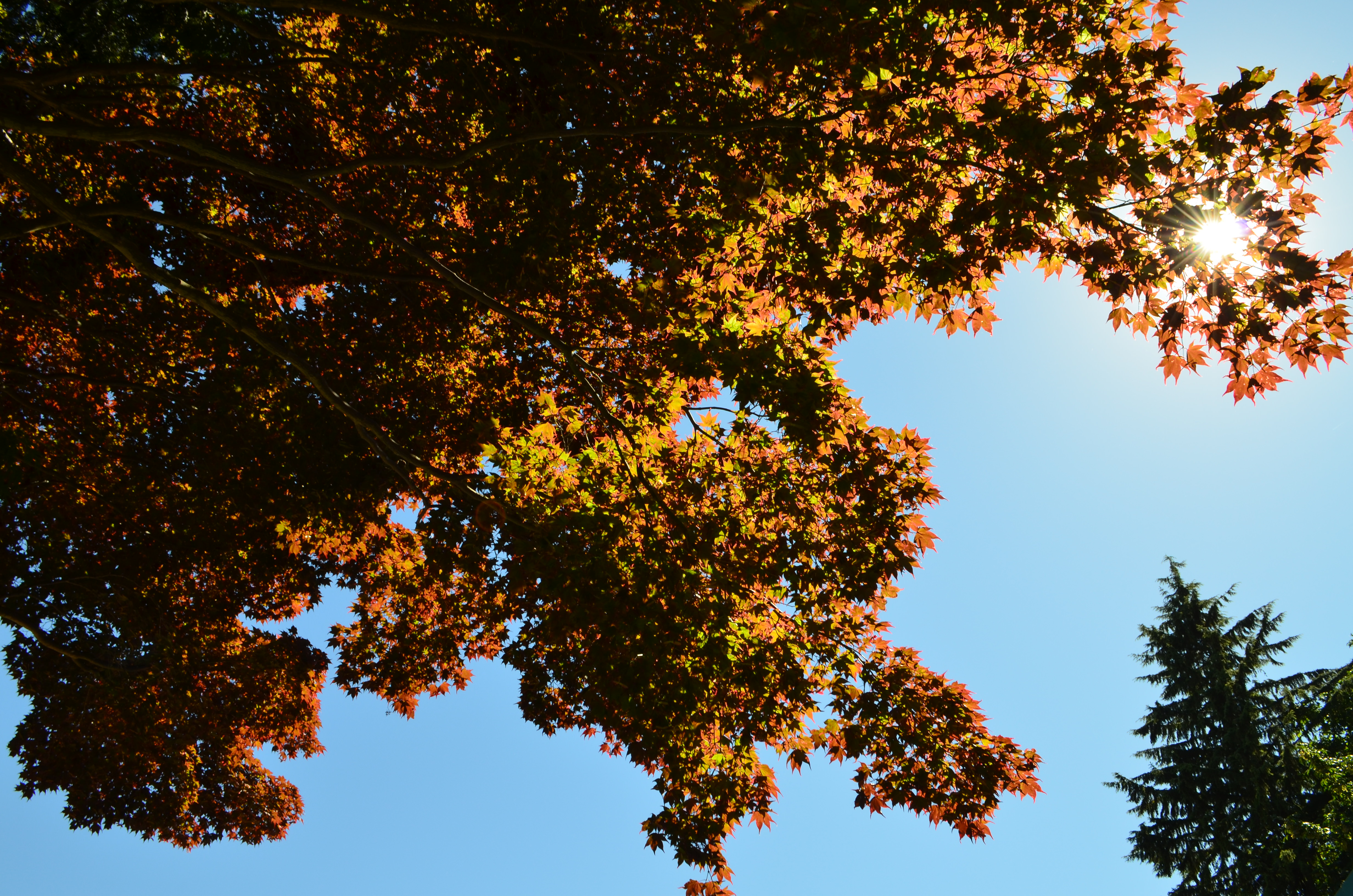 From Granville Island, we caught one of the cute and colourful little Aquabuses that ferry people around False Creek, and got off at Yaletown.  From there we had the crazy idea to walk the seawall to Stanley Park, hitting up Sunset Beach and English Bay along the way.  By that point it was late morning, it was getting hot and it was much longer walk than we realised.  BUT!  It was a lovely walk and well worth it to see the beaches.

Stanley Park is Vancouver’s not-so-little oasis right on the edge of downtown.  It’s more than just a public park, it’s actually 400 hectare rainforest and home to plenty of wildlife (including racoons and beavers).  It’s also where you’ll find the famous Vancouver Aquarium.  We didn’t have much time to explore the whole park, but we did walk the scenic sea wall route which took us right past the famous first nation Totem Poles. 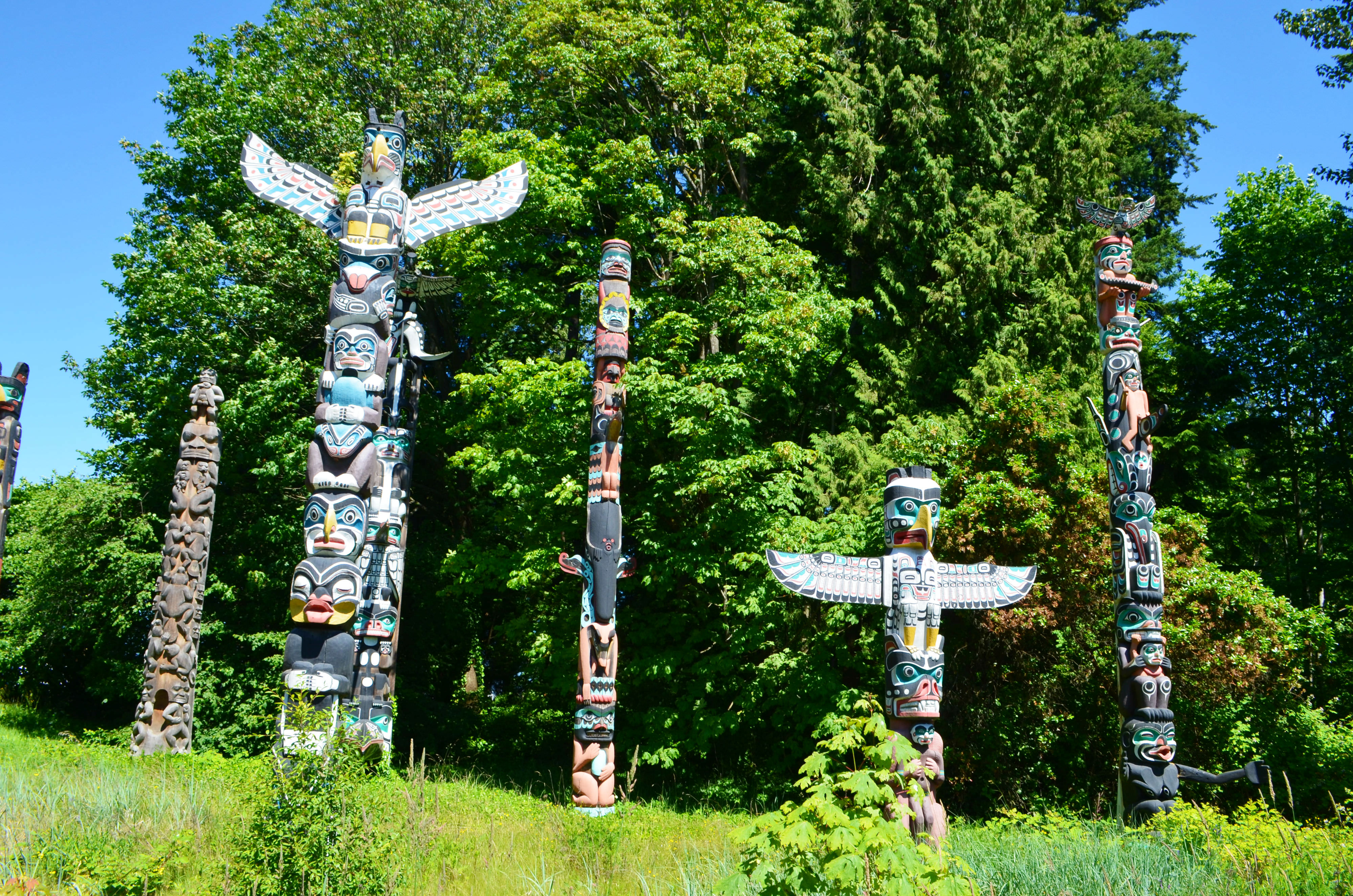 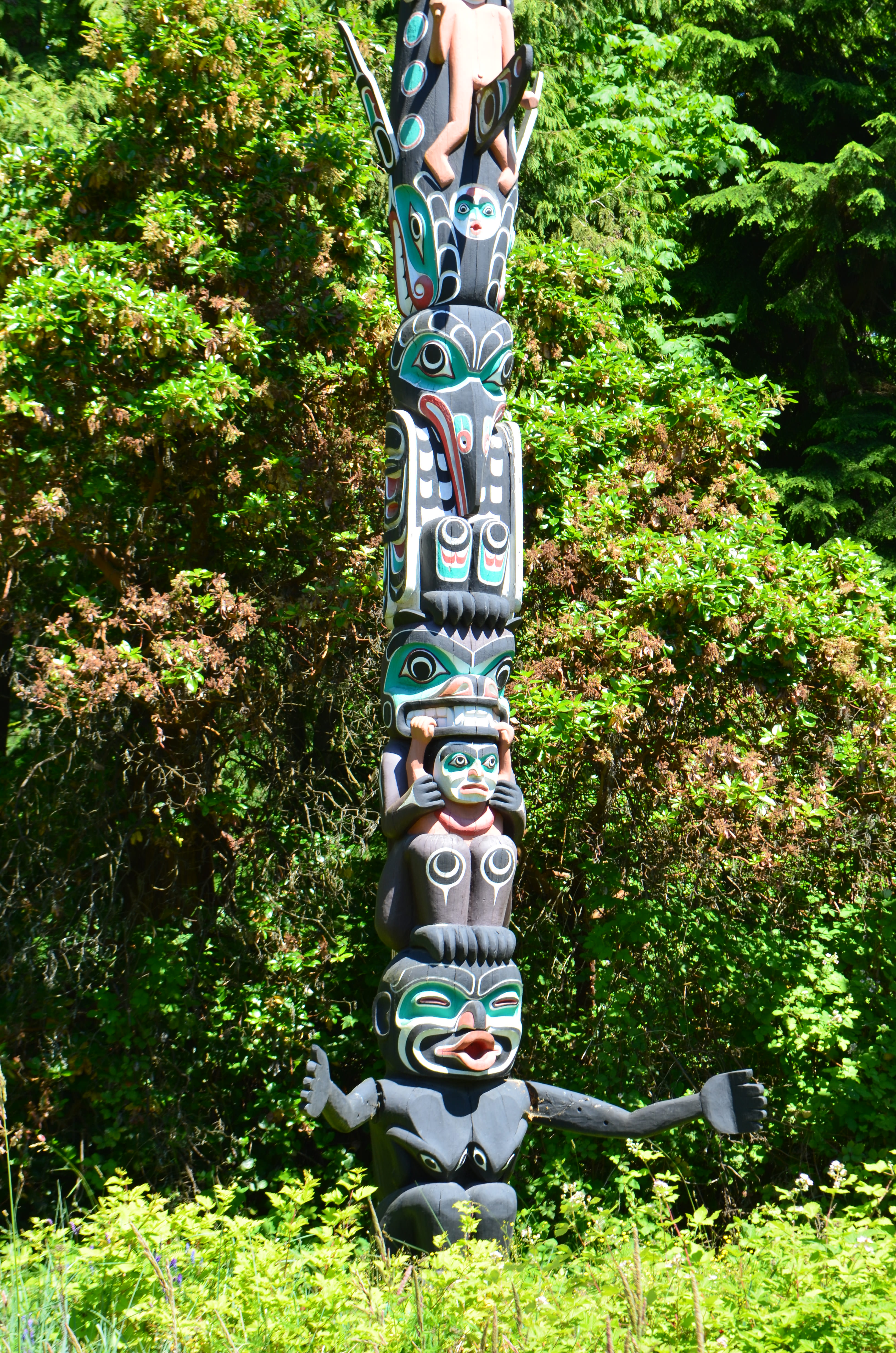 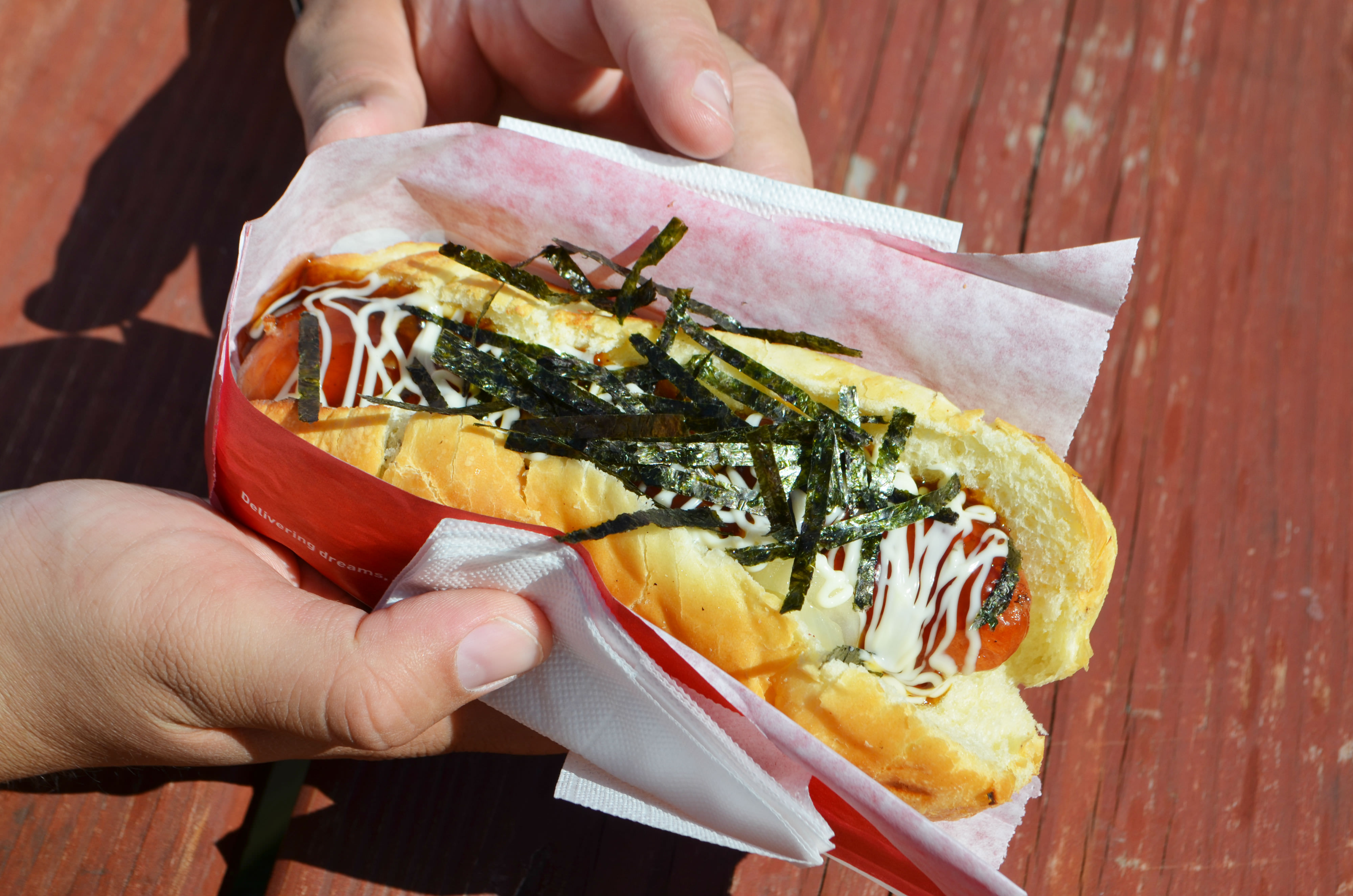 By the time we did a loop of the park it was time for a pitstop and we just happened to stumble across a Japadog Stand.  I’d heard about Japadog before heading out to Canada and then passed one of the stands on the afternoon we arrived.  They’re basically Japanese-themed Hotdogs, which sounds really weird, I know.  But, as a self-proclaimed hot dog connoisseur I felt it my duty to give one a go.  I know, how I suffer, right?  We went for the Terimayo, which is a hot dog topped with teriyaki sauce, mayonnaise and seaweed, and d’you know what?  It was… really weird.  But good weird.  Like, really good weird. The salty seaweed totally made it. 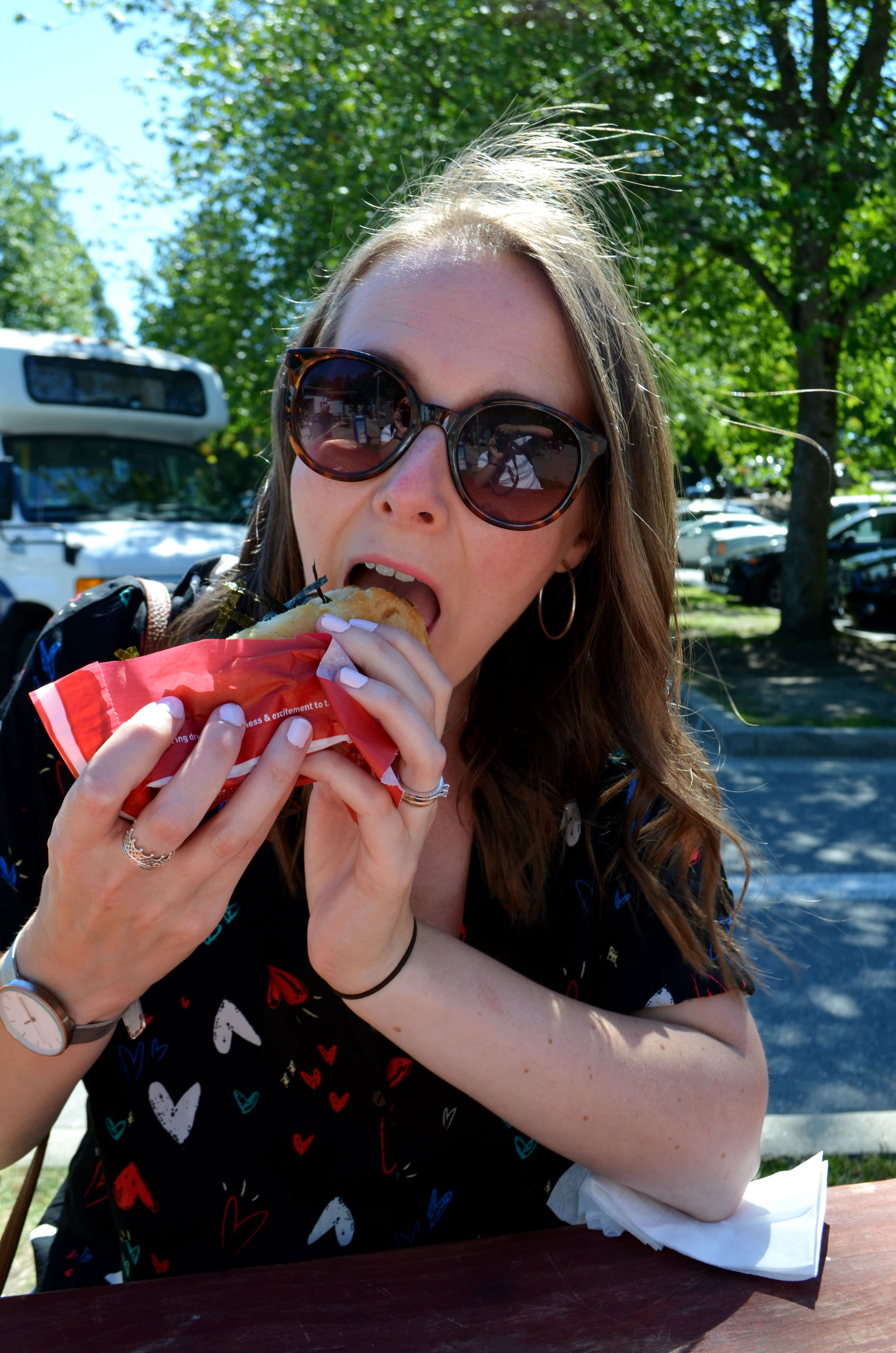 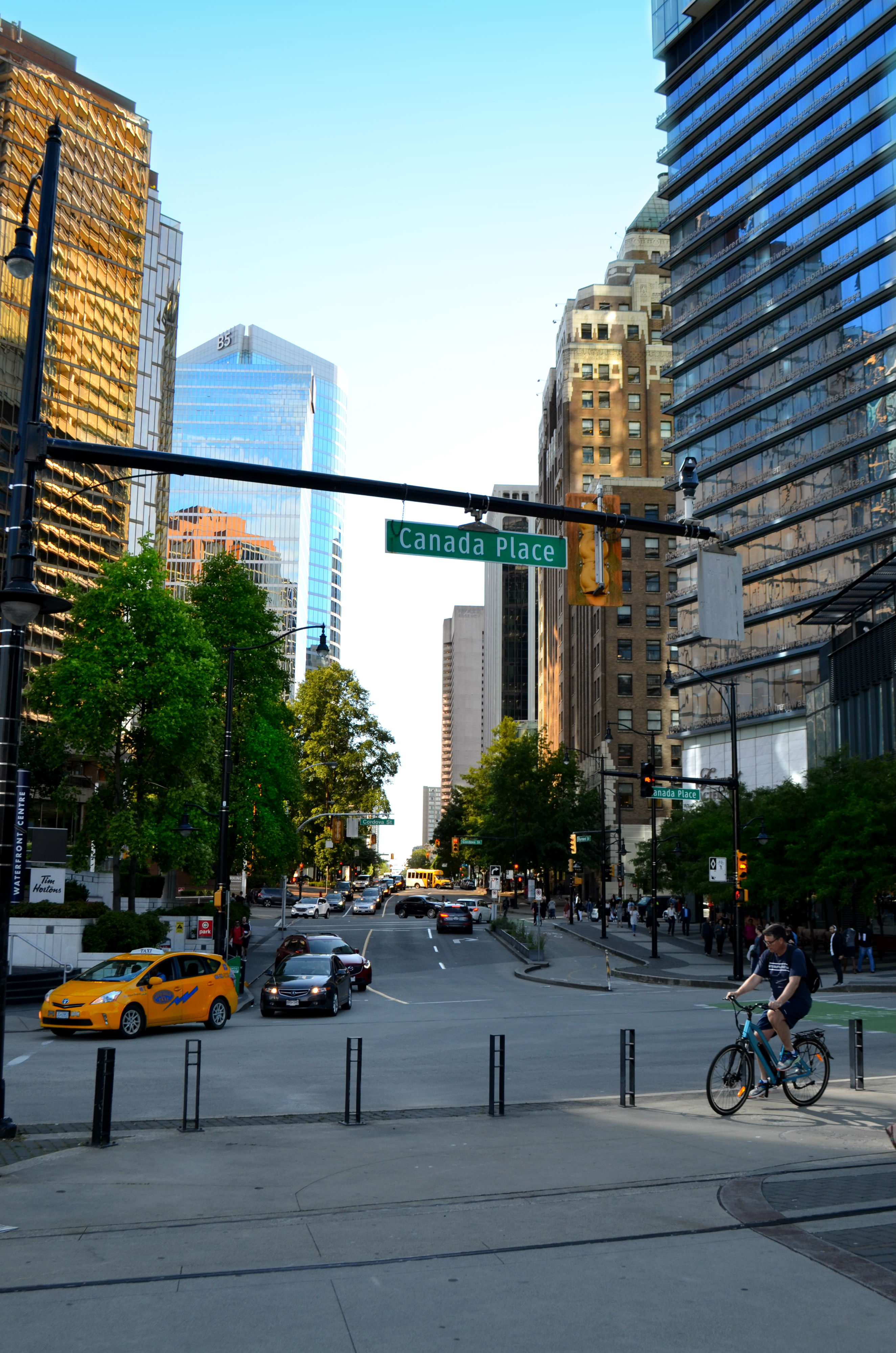 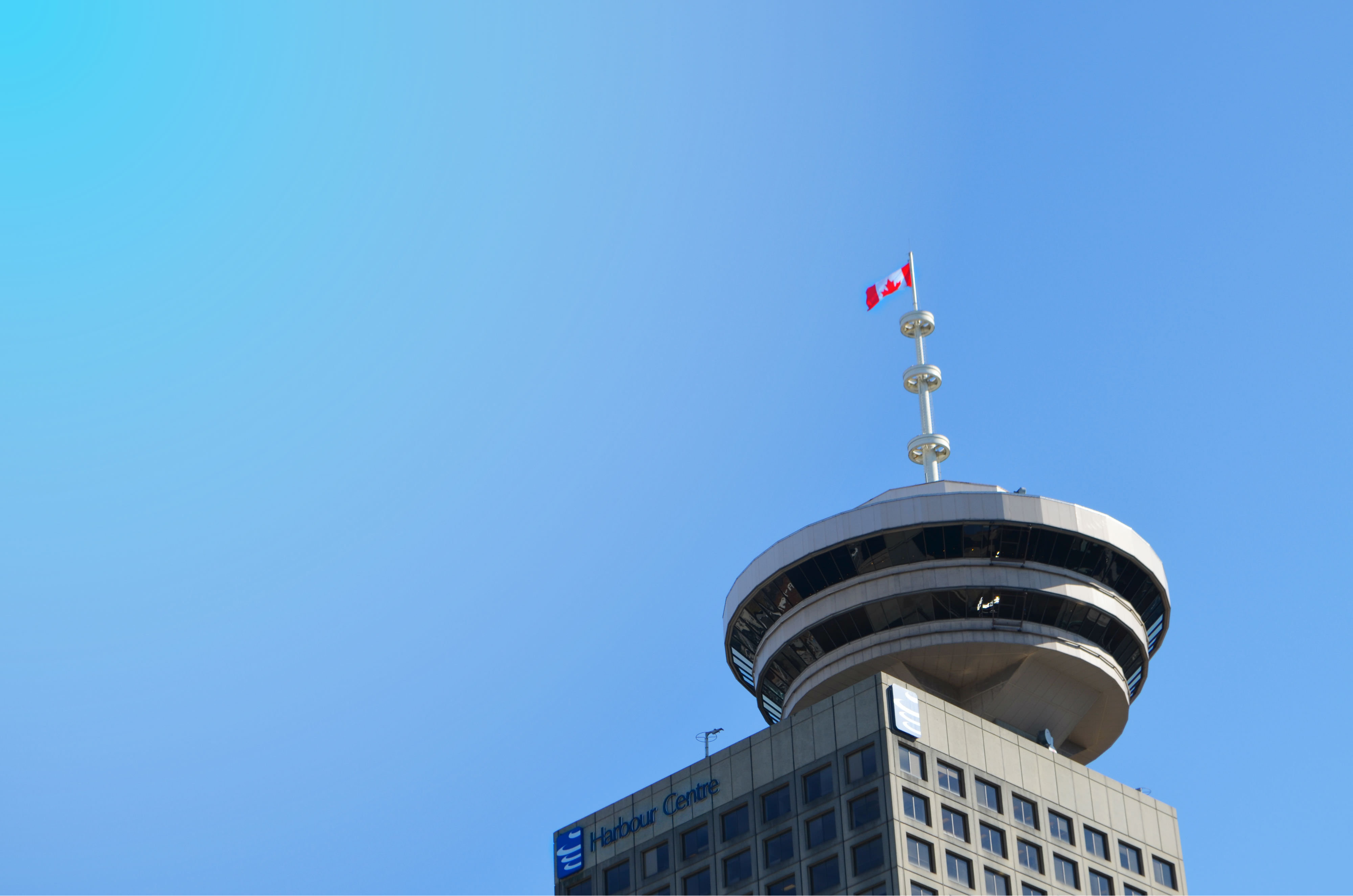 Next we took a tip from our hotel receptionist and headed back downtown to visit the Harbour Centre’s Vancouver Lookout.  We like to climb to the highest point whenever we visit a new city, so the Vancouver Lookout was definitely on our list.  However, it costs $17.50 each to zoom up in the glass lift to the viewing platform.  Thanks to a sweet little tip from our hotel receptionist, we got in the lift (for free!) and whizzed up to the revolving restaurant instead.  It was mid-afternoon, they were only serving small appetizers and drinks and it was pretty much empty.  We bought a hot drink for around $6 each and just sat and watched the view go by. Of course this trick would never work during peak restaurant hours, but during the middle of the afternoon it worked like a charm 😉 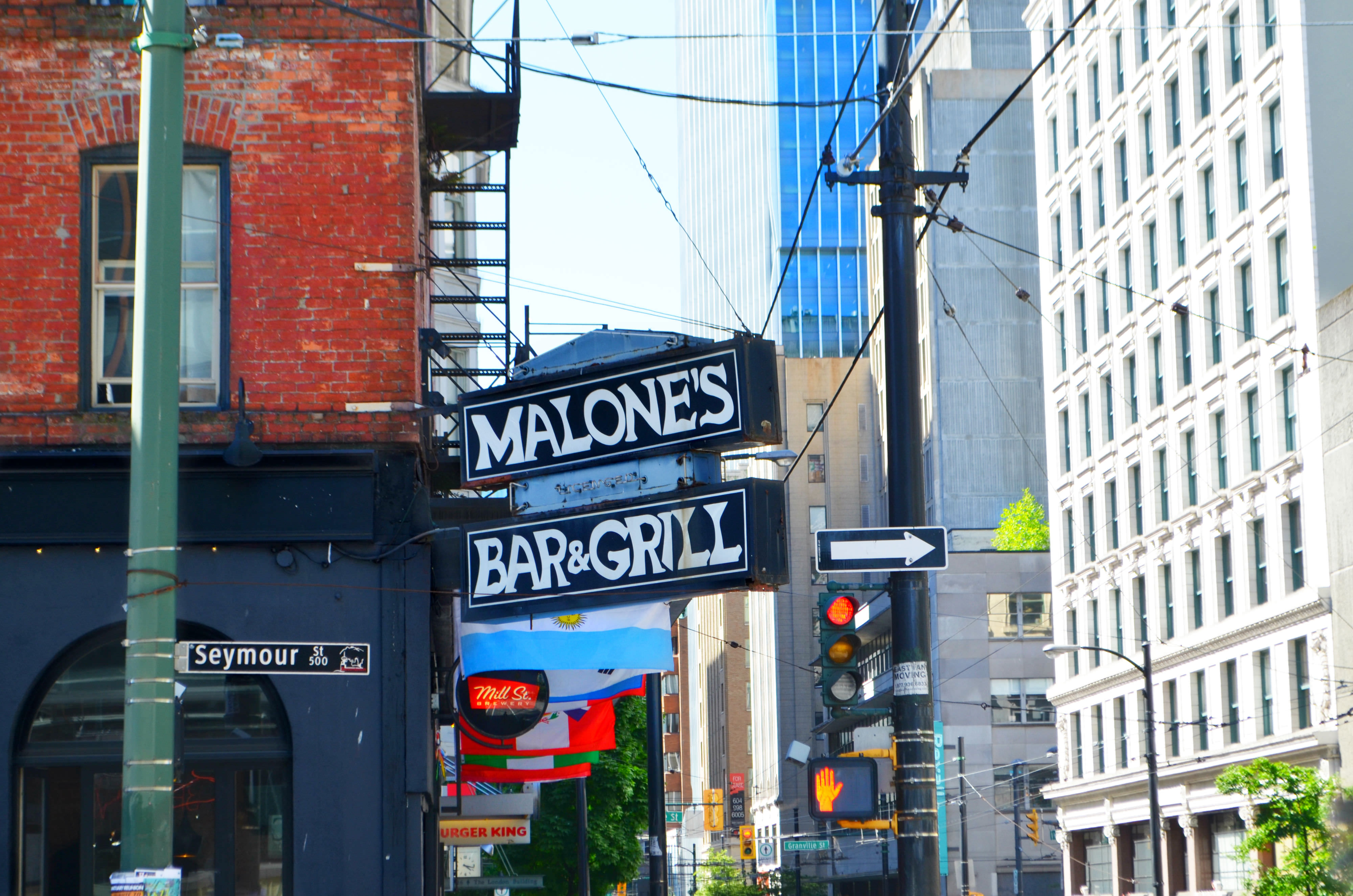 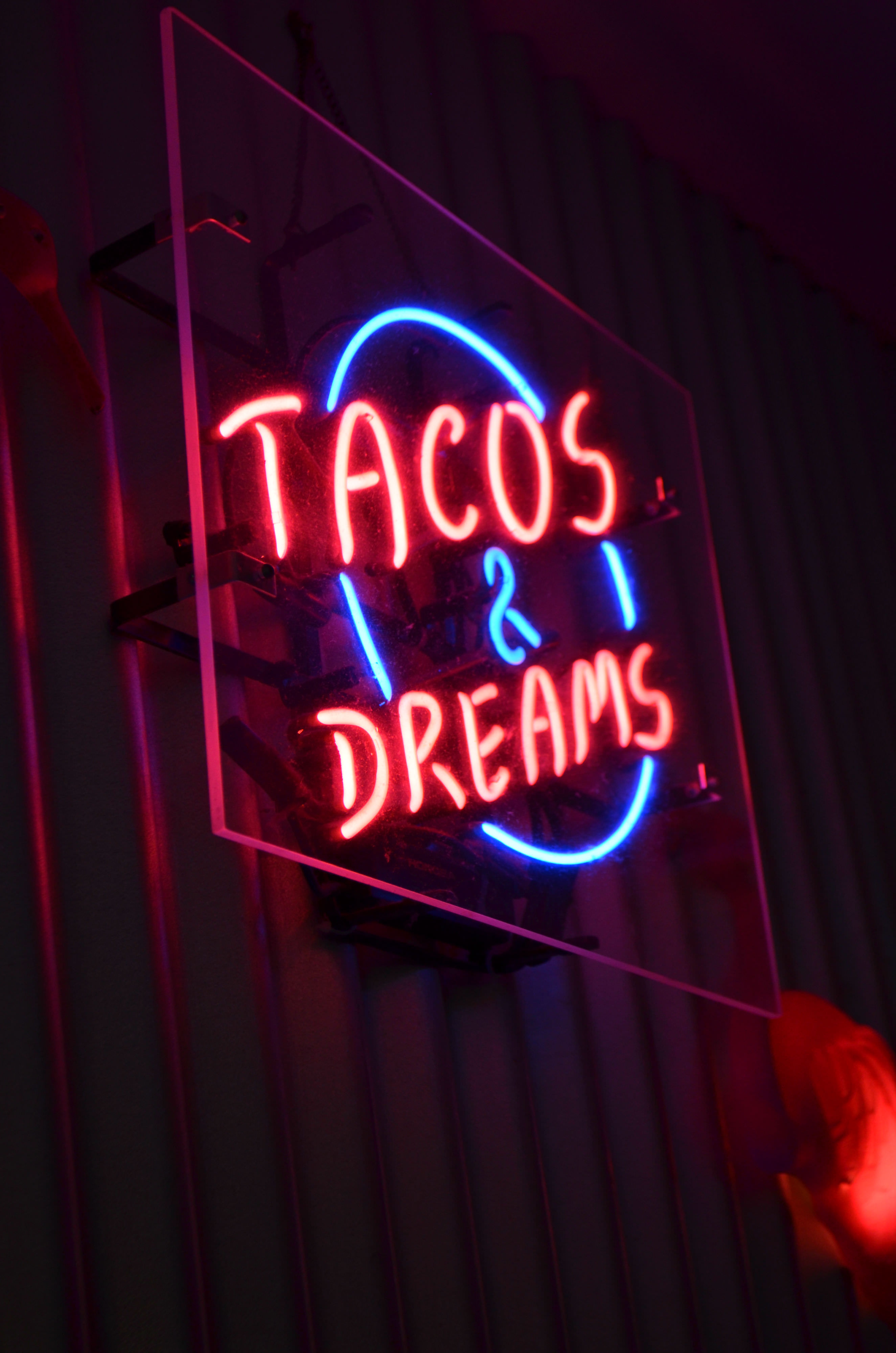 Gastown is the oldest part of downtown and is named after “Gassy” Jack, a steamboat captain from “oop norf” who made it to Vancouver in 1867 and decided he’d had enough of the high seas and opened up the city’s first saloon.  It’s full of old brick buildings that reminded me a little bit of New York and is the best place to head to if you’re looking for a bite to eat.  We ended up at Gringo on Blood Alley which is basically where I want to retire to someday.  80s Music?  Check.  Stadium Nachos and Street Tacos?  Check.  Cocktails with Gummy Worms?  Check.  Neon Lighting?  Check. 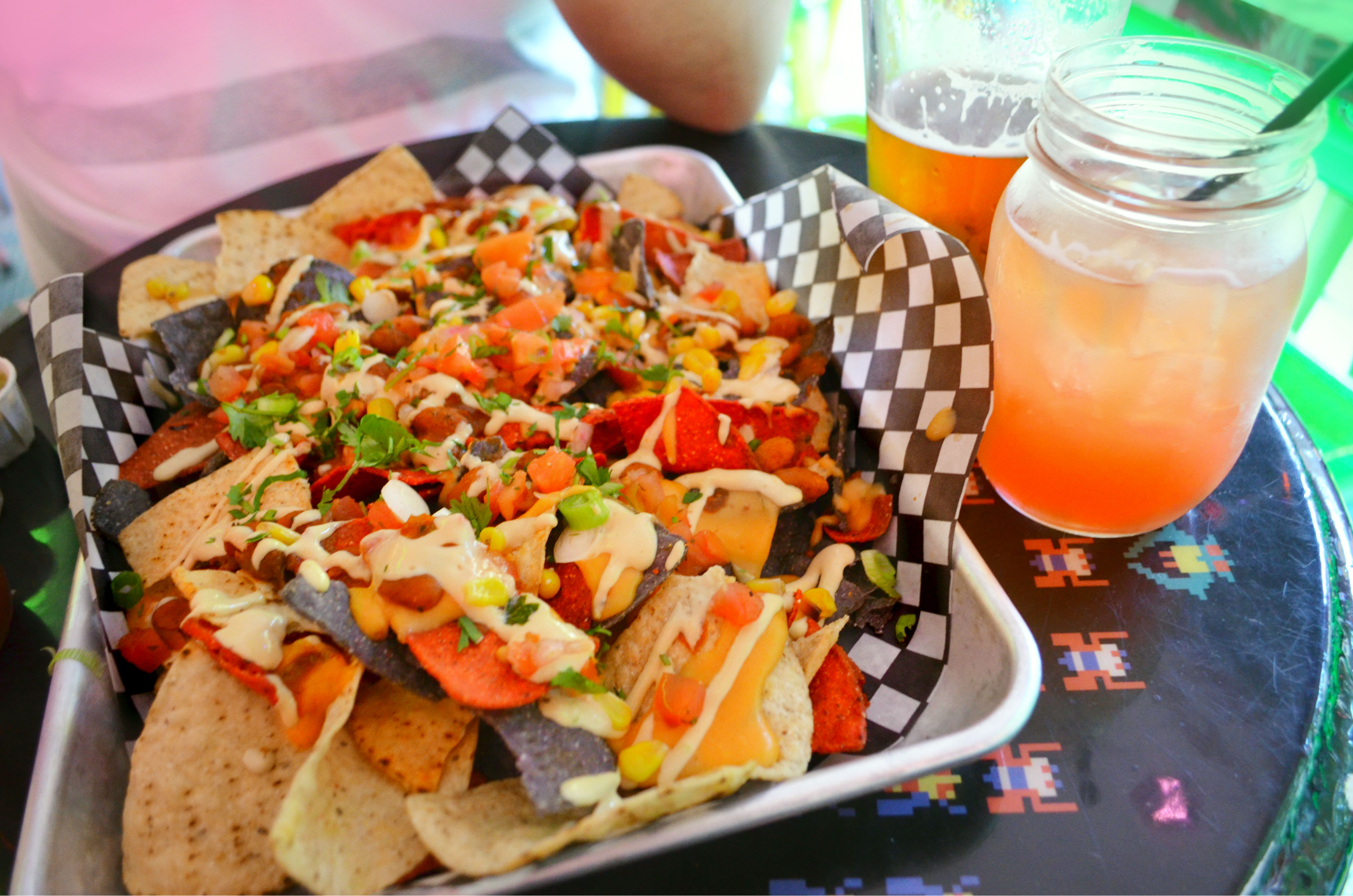 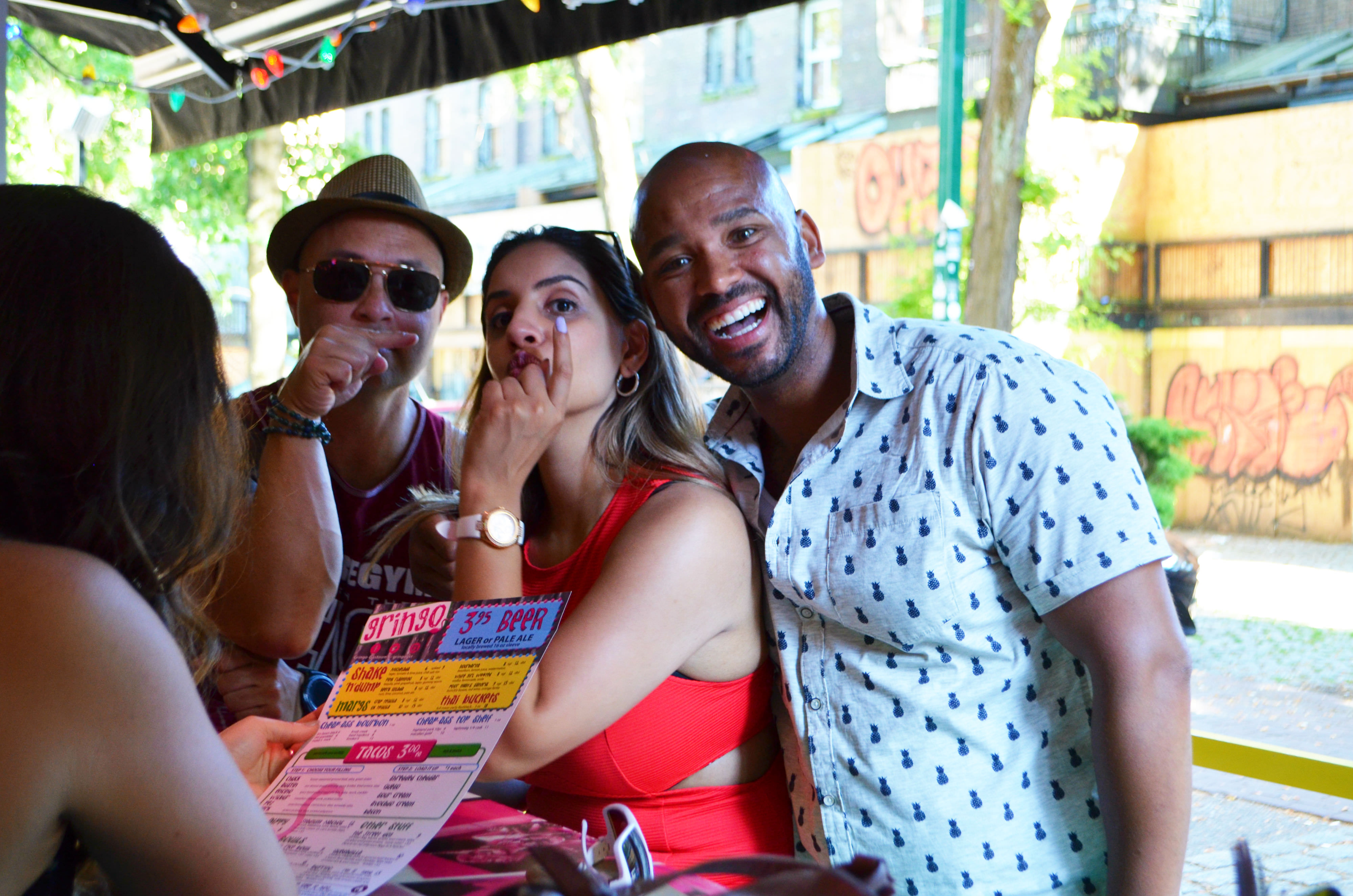 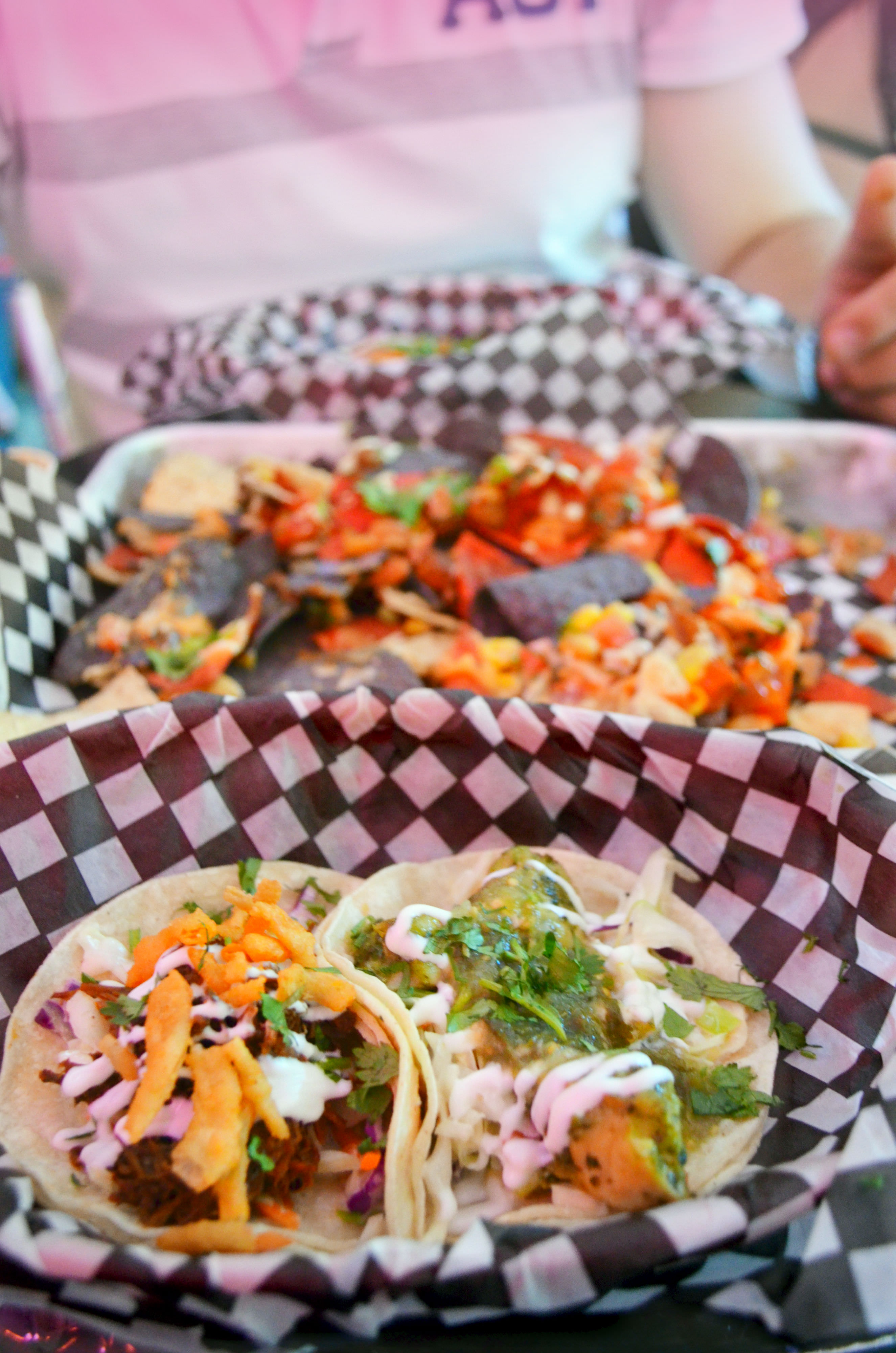 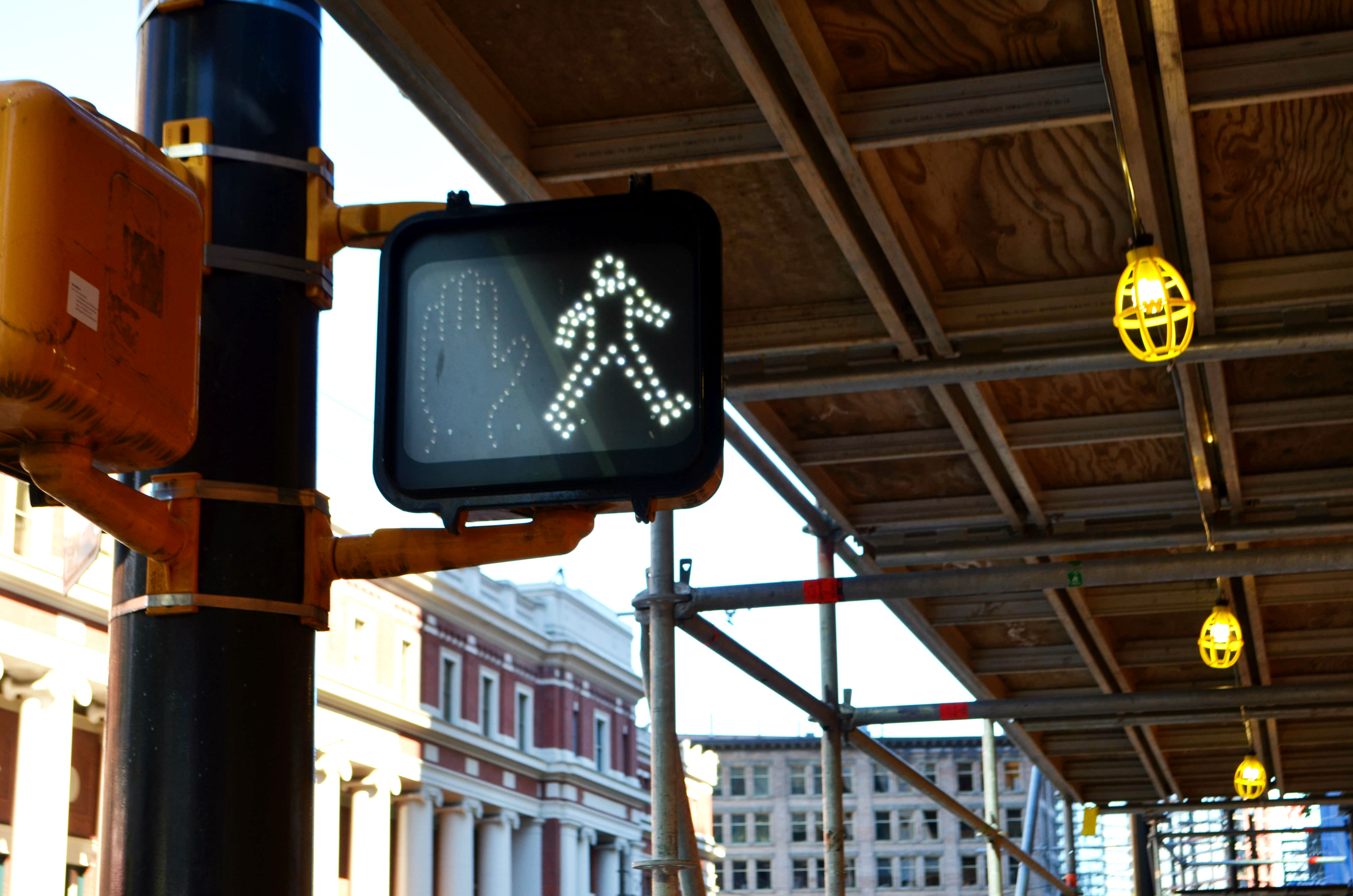 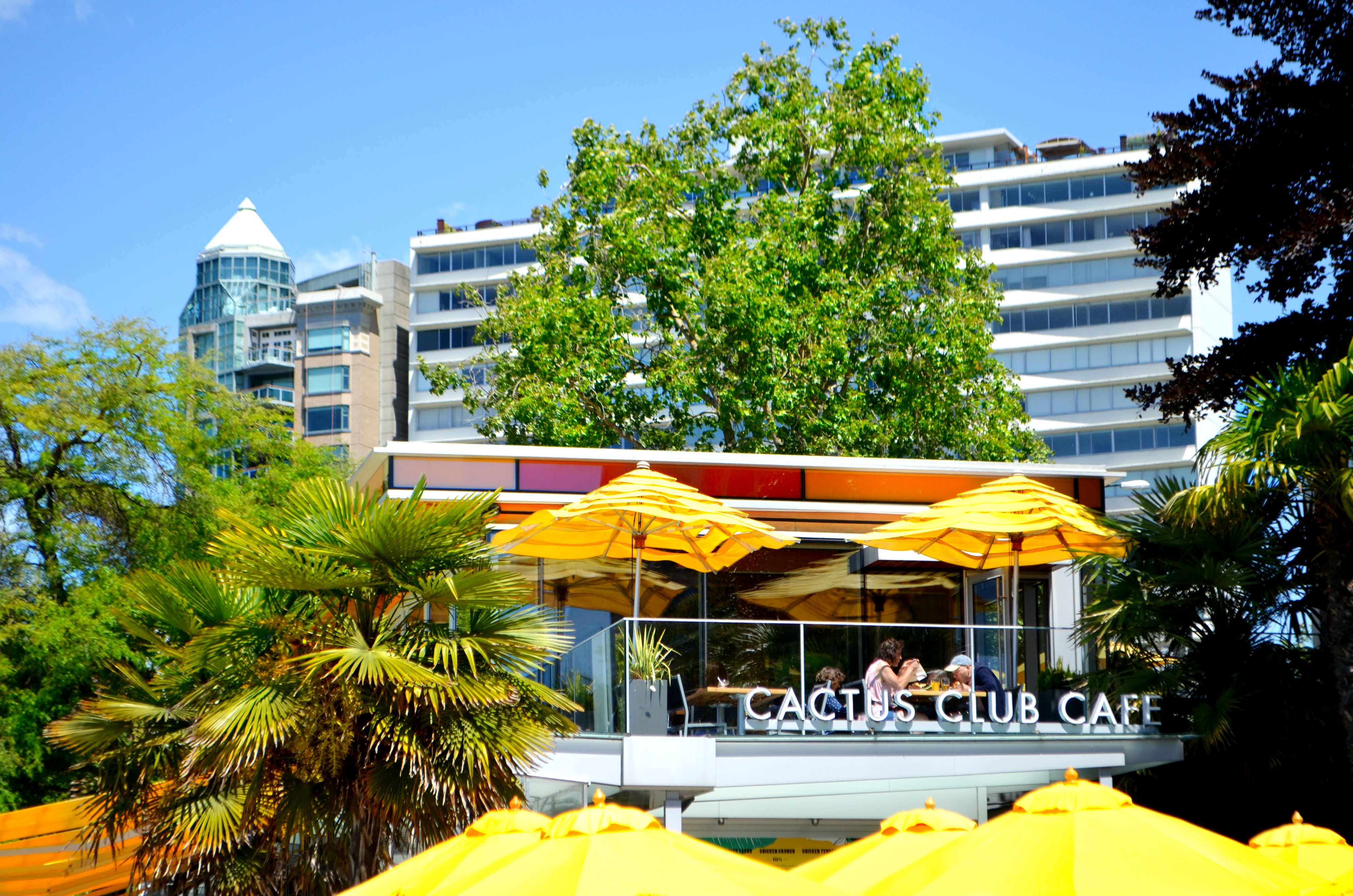 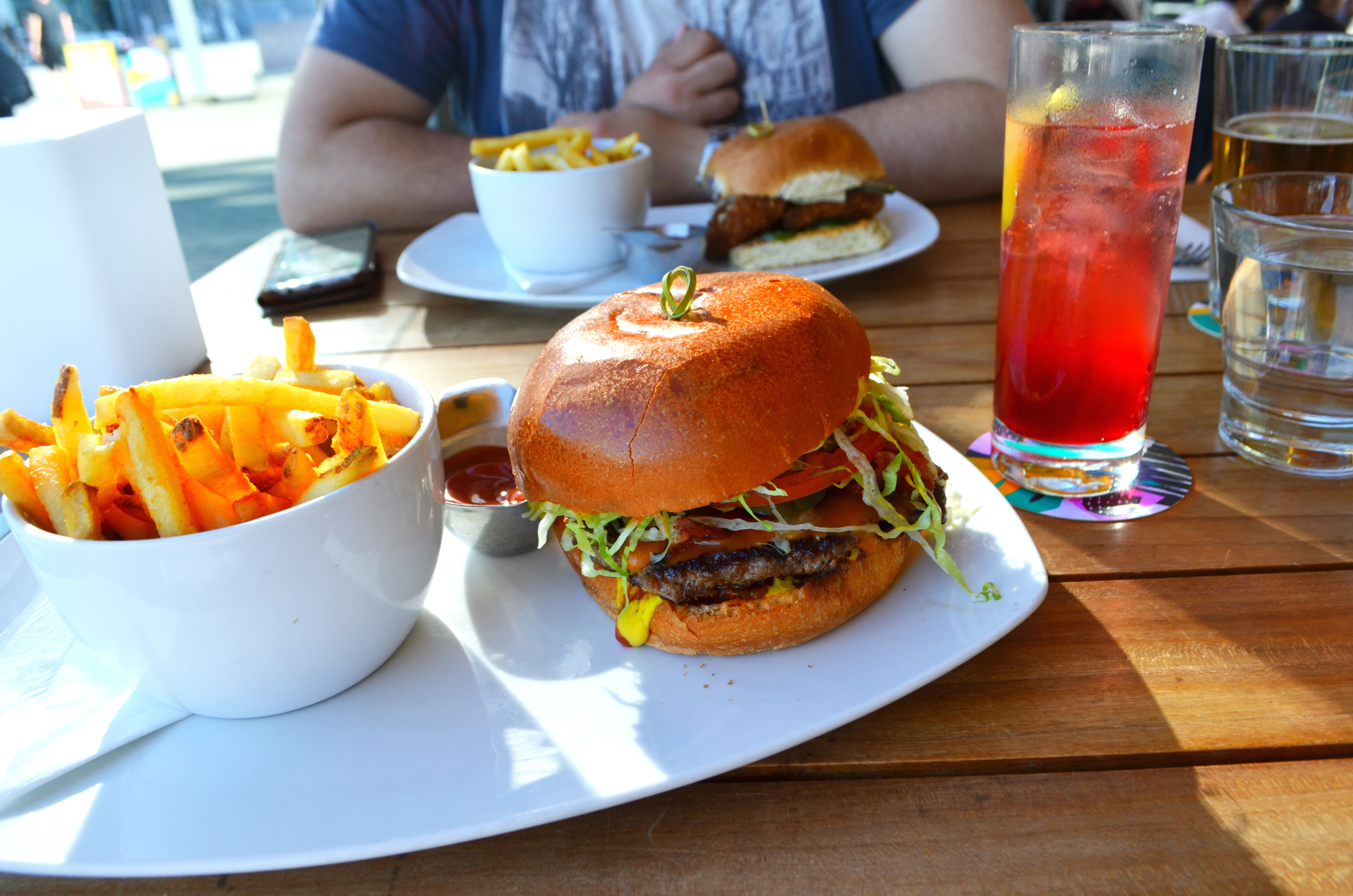 We ended the day in Coal Harbour, which doesn’t really have that much to see or do – it’s basically a big harbour and bagged the name “blue blood alley” thanks to all the swanky apartment blocks and mansions there.  But, it was a nice place to round off our first day.  We walked down to the water and watched all the sea planes coming and going – flying off across the water towards the mountains – and then ended up soaking up the sunset on the terrace of the oh so trendy (and very reasonable) Cactus Club with a burger each. Perfecto.  🙂 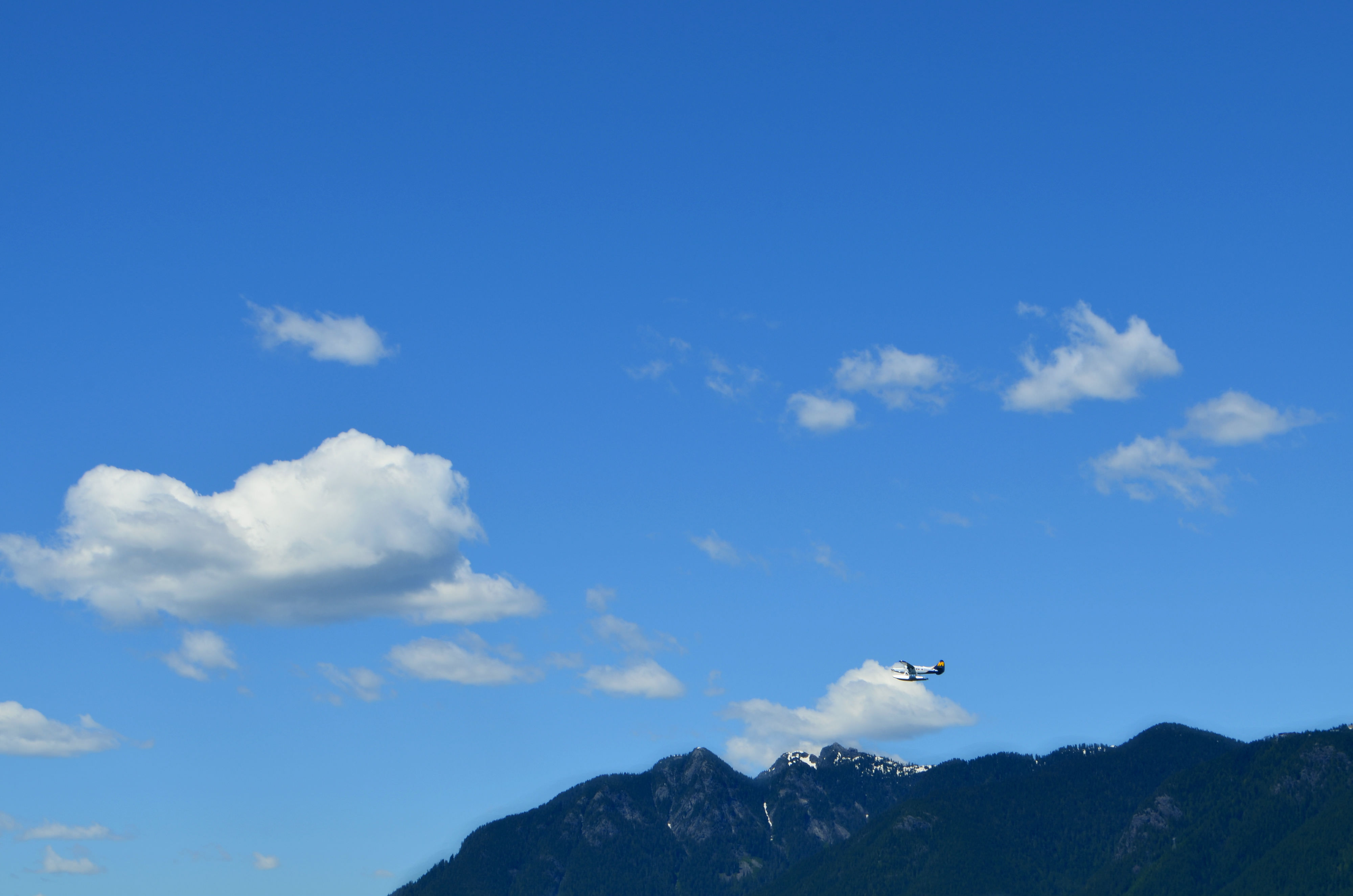 Phew, that was a long one!  Have a great weekend everyone 🙂

9 replies on “Vancouver in a Day”

I’ve been loving following your trip to Canada! I haven’t been out west other than to ski, so this is a great insight as to what the rest of the coast has to offer 🙂

Thanks so much! It’s such a beautiful country – I’d love to see it in the winter. Where do you go to ski? 🙂

Woo it looks amazing! I’ve done Vancouver once but went in the Winter so it was very different. I’d love to go back! x

Oh cool! What was it like in the winter? Freezing?

Hey Nia! Glad you had fun exploring Canada – Vancouver is definitely our best city! I spent 4 days there before my flight back to BCN. The only touristy thing we did was a 2 hour bike ride around the seawall though, which was fun! Next time you’re in the country I cam give you a list of new places in Van to eat at (and more burger/hot dog/pizza places, though I’m not sure if you’d be into a veggie burger place). It was lovely catching up in the Rockies, and hope to see you soon!
Sapna

Ah! We were going to do the bike ride around the sea wall but Sunny was struggling with his ankle and thought biking would make it worse. It’s such a beautiful city 🙂

So nice seeing you too! x

[…] snaps of the murals I spotted whilst strolling around Vancouver.  I’ve already written a whole post about what I got up to during my 48 hours or so spent in the city, but I thought the murals were so […]

[…] out I had one post left – and here it is.  Officially, Sunny and I spent two whole days in Vancouver before heading off on our road trip towards Jasper and Banff – but because we stomped the […]

[…] on Instagram full of ideas on places to visit and to eat!  Before Sunny and I flew out to Vancouver last year for our Canadian Roadtrip, we knew we were only going to have a day at most to explore […]