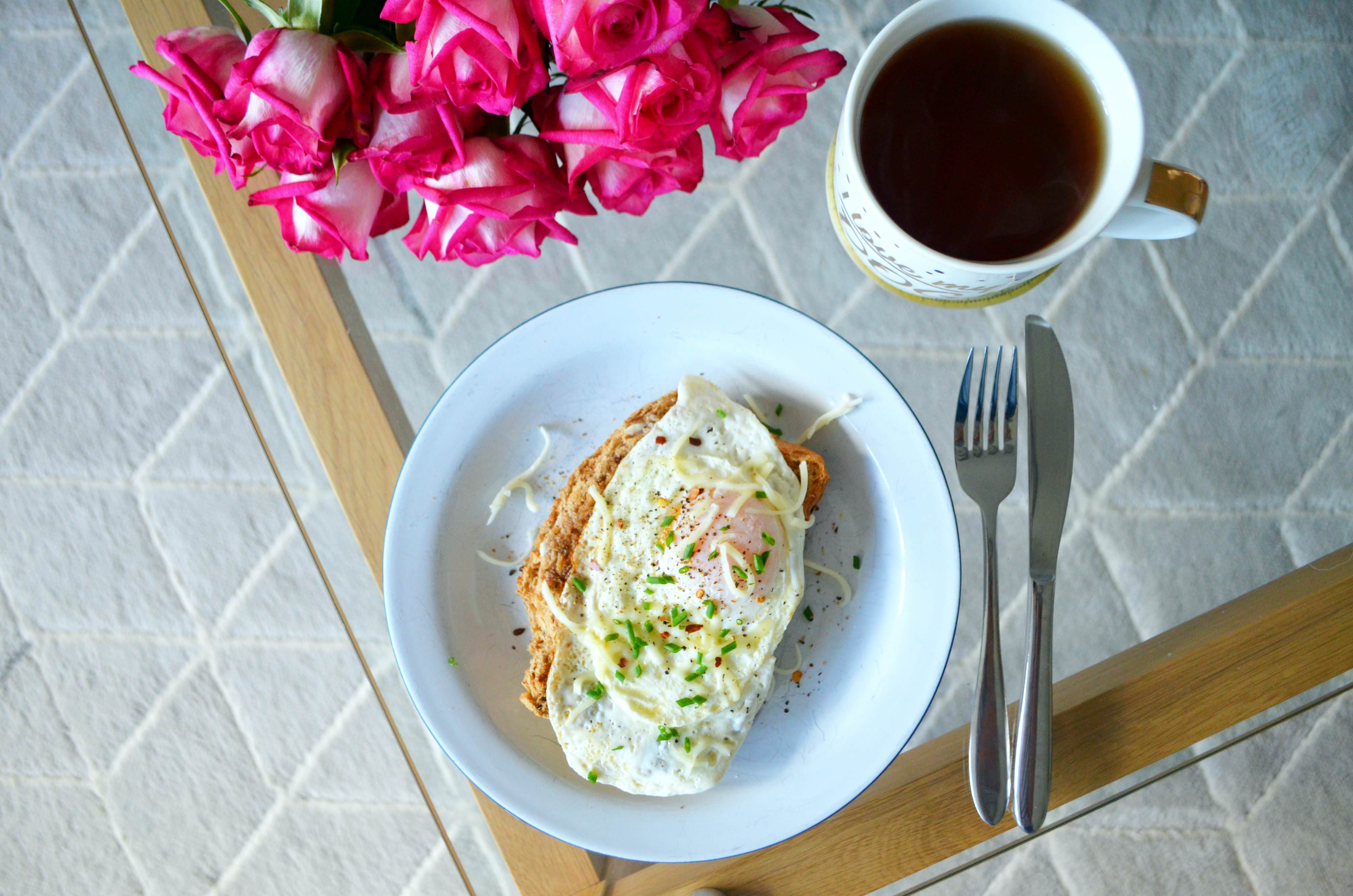 I’m absolutely useless when it comes to eating lunch during the week.  Oh don’t get me wrong, I’m the first person to dive head first into the fridge at lunchtime, but I always seem to surface with my hands empty and end up heading off to the snack cupboard instead.  Jam Doughnut?  That’ll do.  Half a bag of Tortilla Chips?  Be rude not to.  I grab and I go and more often than not I end up swinging back in a couple of hours for round two because – you guessed it – I didn’t eat a proper lunch.

So this week I decided to shun the snack cupboard and sort myself out with some proper midday grub in under 15 minutes using whatever happened to be in the fridge.  It was really nice to take some time to cook (mostly) from scratch and treat myself to a little lunch date every day! 🙂

Yes, it’s simple and probably a little bit boring, but you can’t beat fried egg on a slab of toast.  I was going to mash up a little avocado to go with it, but since none of the ones hanging around in my fruit bowl were ripe, I had to go without.  I finished things off with some chopped chives, a little grated cheddar, chilli flakes and black pepper.  Yum! 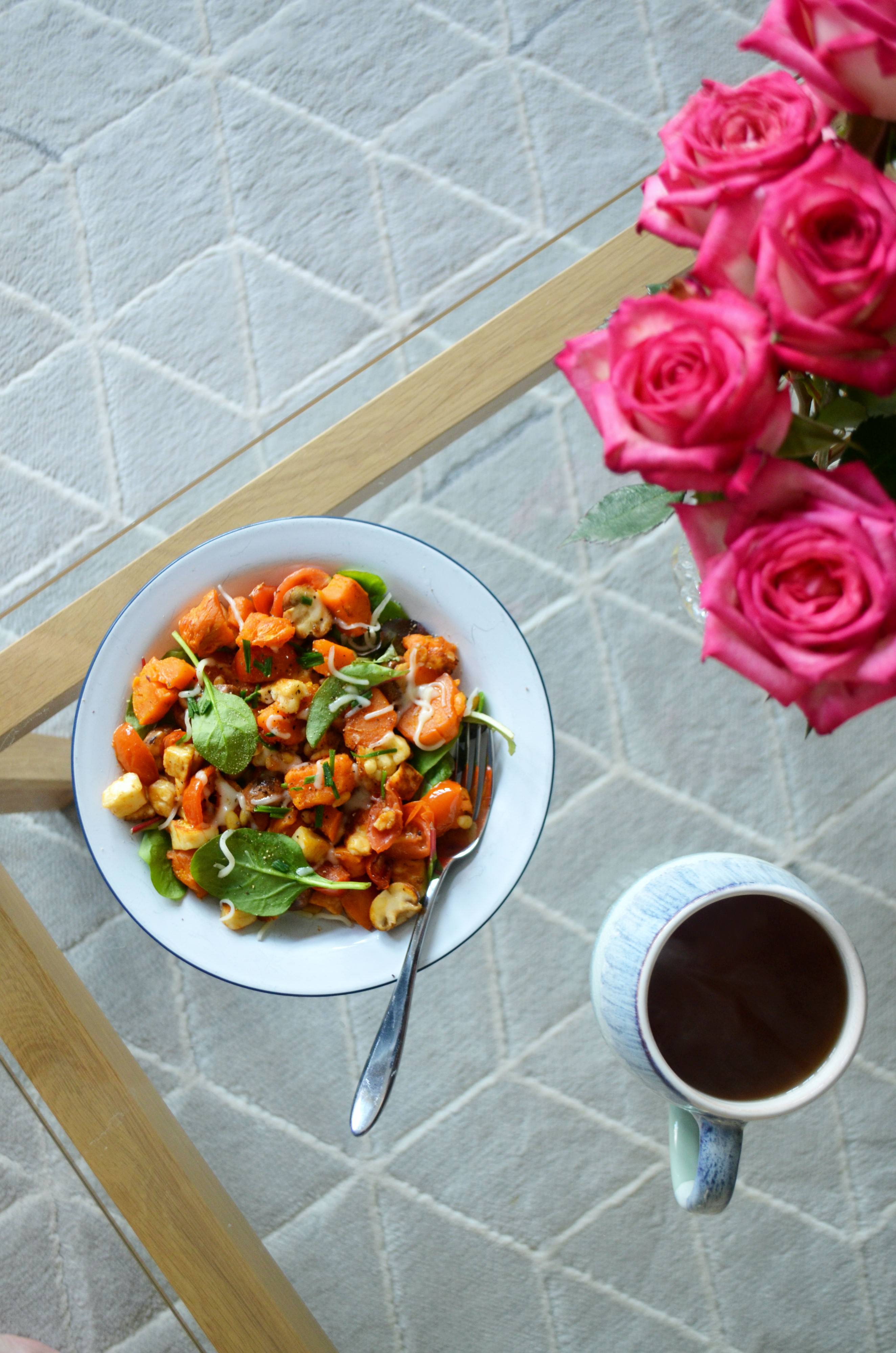 On Tuesday I found some leftover halloumi (…does such a thing exist?) when I was rummaging around in my fridge, so I quickly fried it up with some garlic, diced sweet potato, button mushrooms, pine nuts and cherry tomatoes.  I mixed in some salad and grated cheese (extra cheese!) and scoffed it in front of a brand new episode of Outlander (I’m so happy it’s back!). 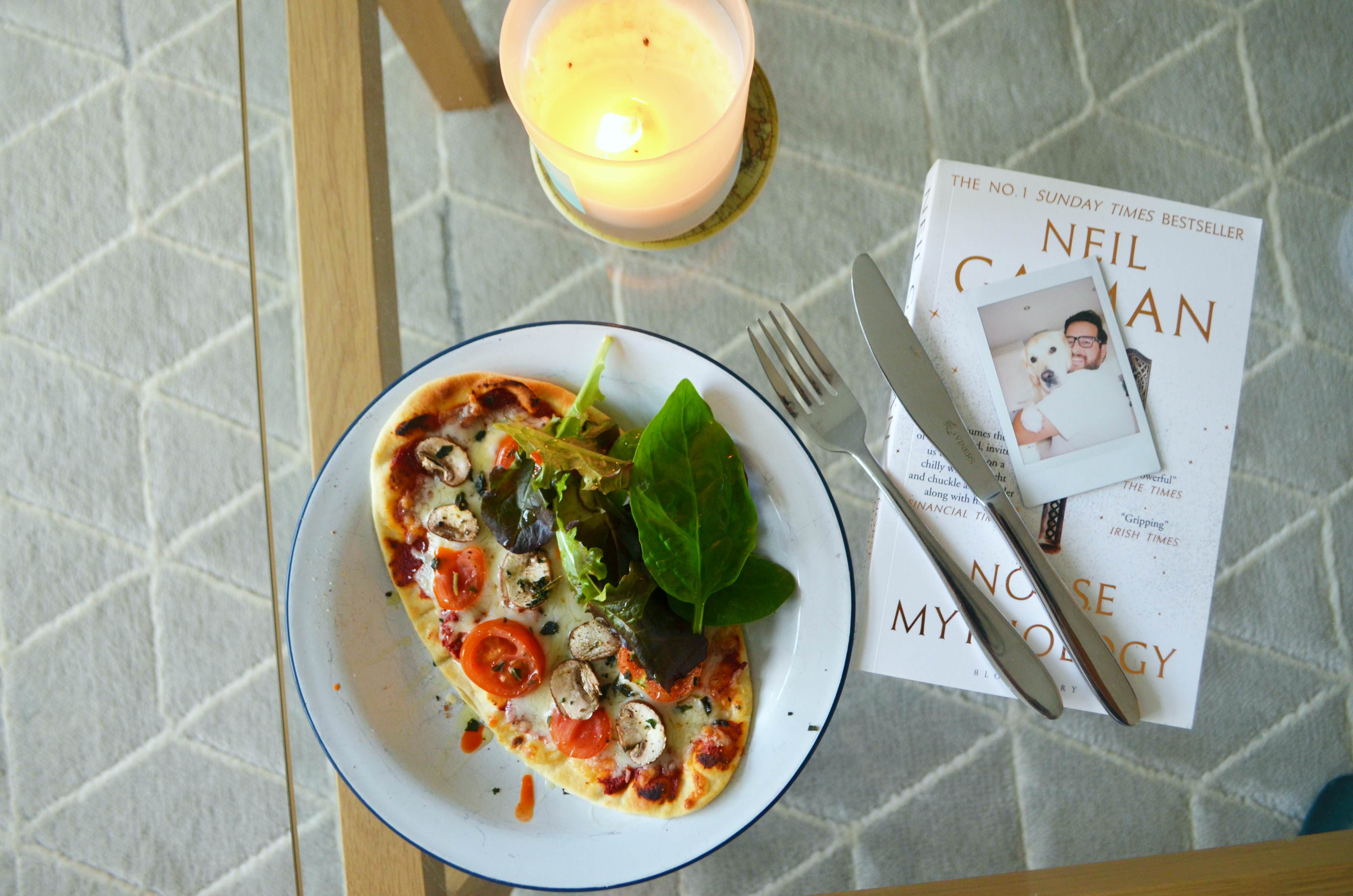 Hump Day Treat!  Sunny was working from home and found some flatbread in the fridge and complained that it wasn’t any good – “You can’t make a sandwich with that!”.  Nope, you can’t.  But you can make pizza.  I spread some tomato puree over the top, sprinkled it with some grated mozzarella, added some chopped button mushrooms and tomatoes and then grilled it for ten minutes.  Mwah! 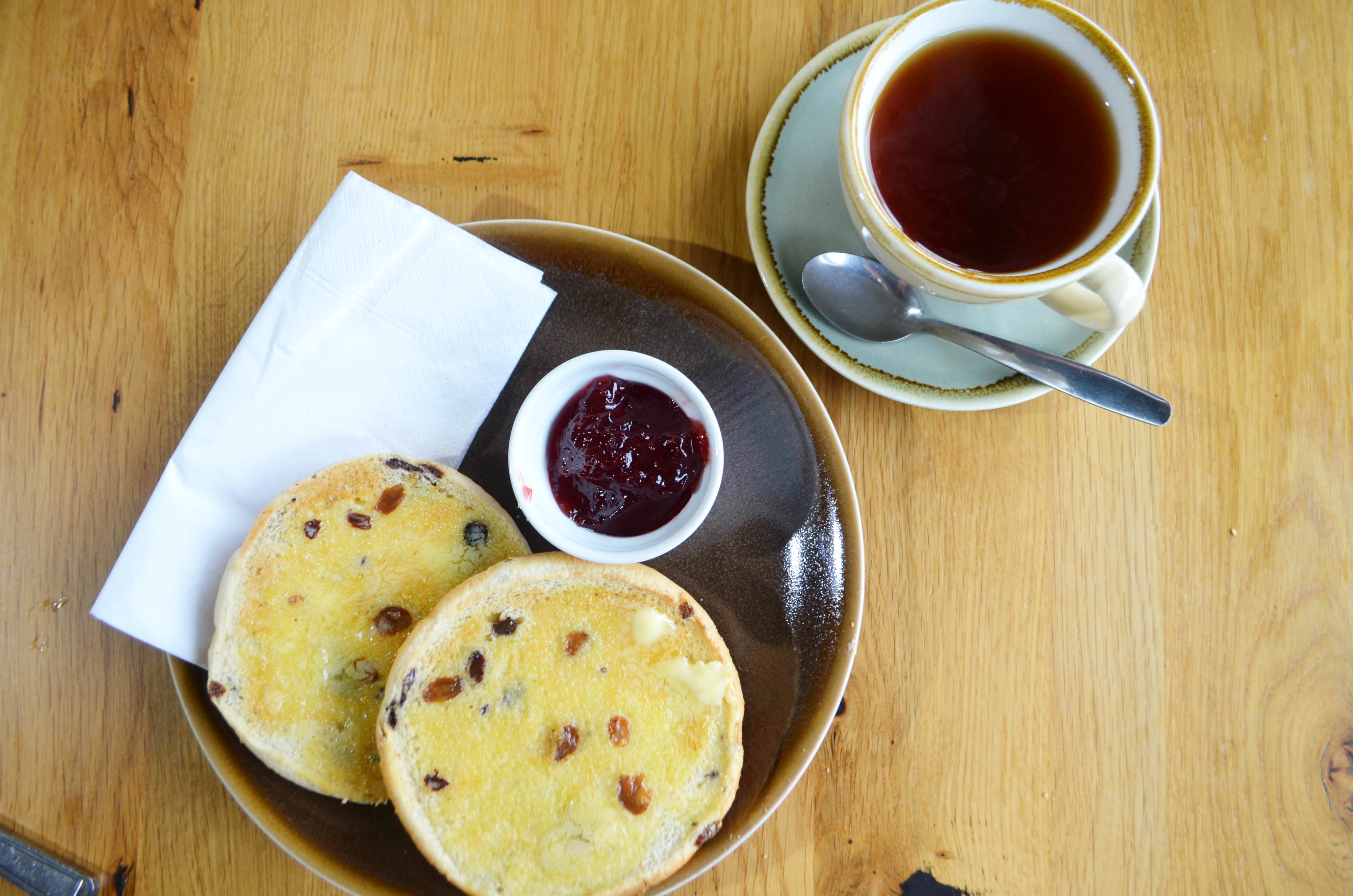 Change of scenery! On Thursday, I ended up popping out to the local garden centre coffee shop to catch up with my Mum and Dad.  My Mum and I love a good old toasted tea cake with plenty of butter; old habits die hard, so that’s what I had. 🙂 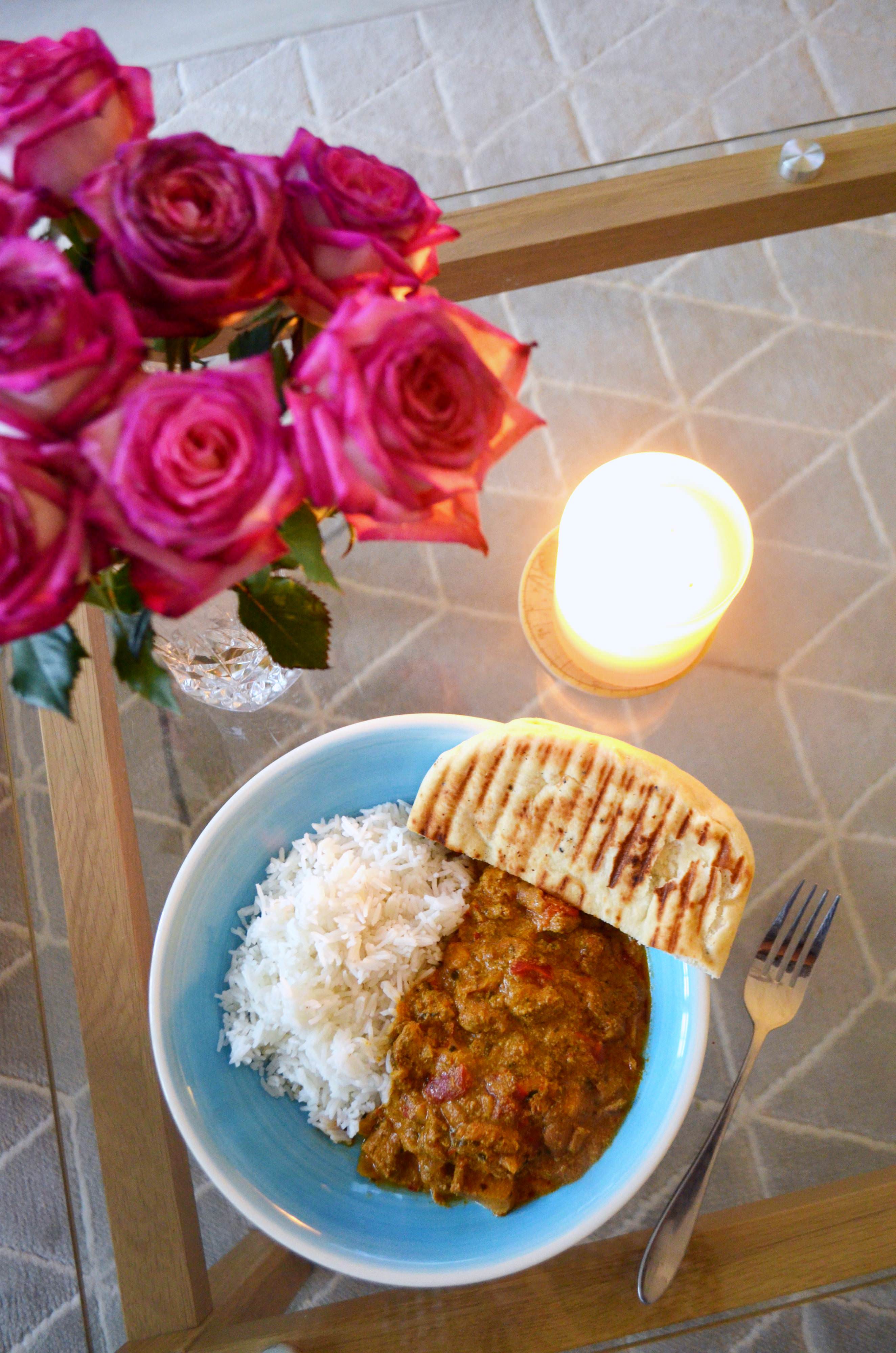 A very gloomy Friday afternoon treat!  Okay, so this one didn’t take 15 minutes – but since it involved absolutely zero effort on my part other than turning the oven on and grilling a bit of naan bread, I’m counting it.  Wild and Game have a whole range of ready meals and pies made with meat from game animals like grouse, pheasant, partridge and hare.  I know what you’re thinking – you’re imagining dinner at Downton Abbey, aren’t you?  Well, while game used to be the nosh of the well to do, thanks to companies like Wild and Game you don’t need a spot on the civil list to get your hands on it.  When they got in touch and asked if I’d like to try their Pheasant Tikka Masala, I said “yes please!” and ended up trying it out this afternoon as a Friday lunchtime treat.  I’d never tried pheasant before (although I’m used to seeing them pottering around the field near where I live – Bungle loves to chase them!) and so I wasn’t sure what it was going to taste like or whether I’d even like it.  But it was delicious, with a flakey, tender texture and a taste slightly similar to turkey, and the curry was the sort of “little bit of what you fancy” Tikka Masala you’d happily pick off a gastropub menu and order with half and half (half rice, half chips for the uninitiated 😉 ). Tasty, and with a hefty portion of pheasant enough to serve two.

I’ve been a bit put off with chicken recently after cooking up a stringy, bad batch from the supermarket a few months ago.  The truth is chicken is terribly over-consumed in the UK and chickens incredibly poorly treated (over 20 million are killed every week for their meat – if you want your eyes opened on the subject then just watch this bbc documentary), and I’m personally a little fed up with being a part of that whole process.  Pheasant, to me, seems to be an ethical and affordable alternative.

One reply on “5 Weekday Lunches”