I don’t know about you but I am officially done with the 30°C heat. In a country that rarely sees the mercury creep above 25, it’s been HELL; I mean, my house is made for drizzly Welsh winters, not stinking, sticky hot summers (emphasis on the ST-ICKY) – and neither am I. On a recent shopping trip I stumbled across an aisle full of thick woolly jumpers and winter coats and let me tell you, I am so ready to feel that cool September bite in the air. And while I’m not ready to say goodbye to the sunshine yet, the summer fatigue I get every year around this time has definitely started to set in.

Hopefully we’re done with the sweat and the humidity for now, but just in case we’re not – here’s the perfect antidote. I absolutely love fresh lemonade – and if you’ve never made it yourself before then why not? It’s an absolute doddle; there’s a reason why kids out in the states set up lemonade stands in the summer (American readers, do they really do that? Or is that just “Disney America?”). But limeade somehow, tastes even better – maybe because it feels just a little bit more grown up, especially with plenty of fresh mint. If you’re planning a late summer BBQ or picnic then you can’t go wrong with a ready made iced pitcher of the stuff – and you’ll be pleased to know it takes less than twenty minutes to make up. Shake some up ahead of the weekend and keep it chilling in the fridge and ready to pour for up to five days.

…Oozing with plenty of homemade strawberry jam and Chantilly Cream…

When it comes to summer cakes, you just can’t beat the basic (but beautiful) Victoria Sandwich. To paraphrase the famous glutton Mr Joeseph Tribbiani, what’s not to like? Cream, good! Jam, gooooood! It’s a classic; the kind of cake that’ll please everyone if you turn up with it at a picnic or at your Mum’s front door on a sunny Sunday afternoon. I mean you’ll be hard pressed to find anyone who doesn’t like a plain sponge cake, sweet cream and strawberry jam. Better yet, it’s very easy to make – even if you’re a bit of a baking noob. The classic, base recipe involves weighing your eggs first, then matching up with the exact same quantities of butter, caster sugar and self raising flour – but I’ve experimented and come up with a slightly more refined recipe with a little added baking powder and buttermilk for a buttery, moist but airy sponge. Sandwiched with a layer of slightly runny homemade strawberry jam (easier to make than it sounds and absolutely worth the added effort) and some piped Chantilly Cream (fancy pants for double cream whipped with a bit of powdered sugar and vanilla – yum yum), you just can’t go wrong. 🙂

For the Chantilly Cream: 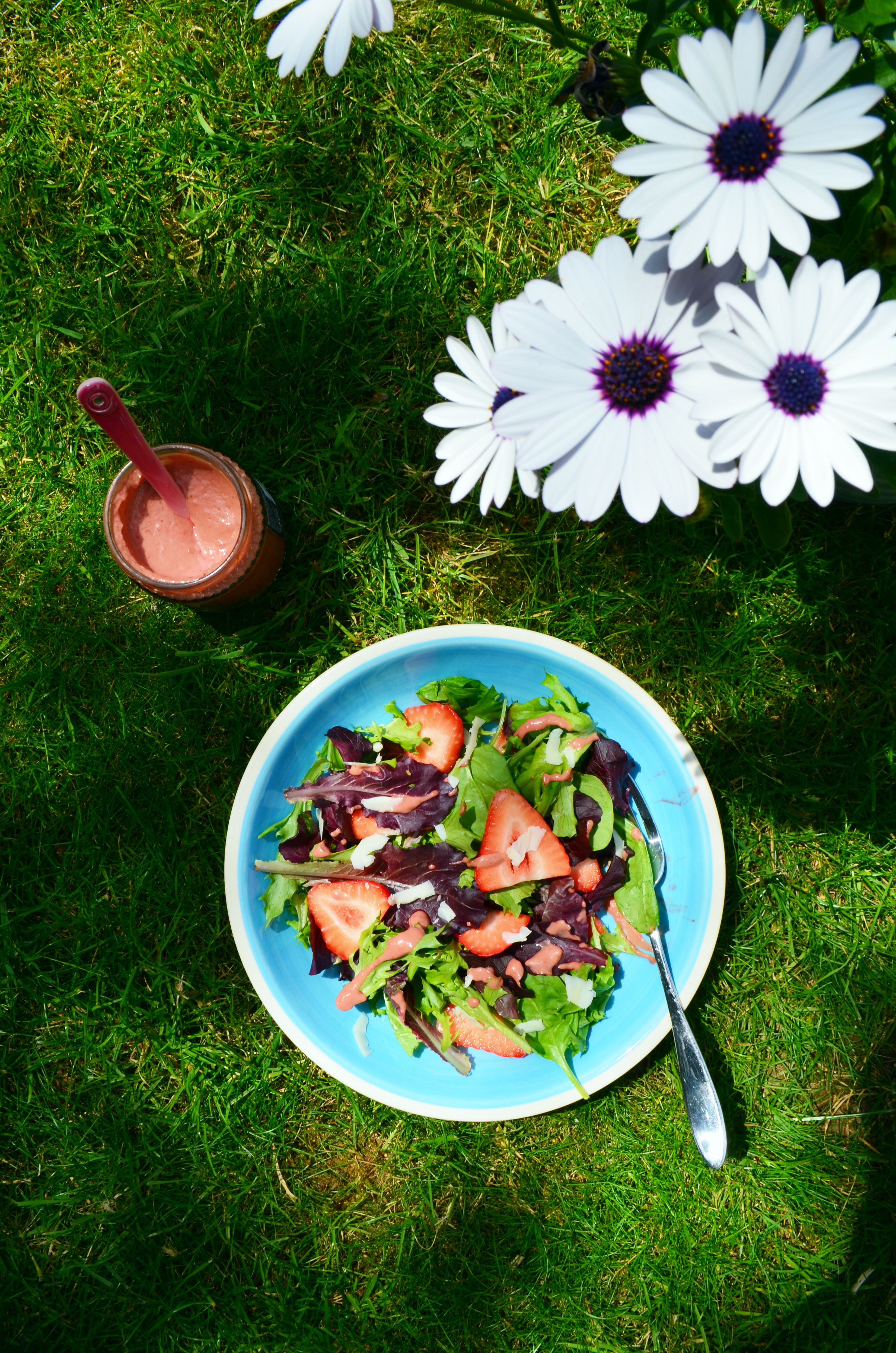 So here’s the thing.  I’m not a massive fan of salads – in fact, I’m not really a fan AT ALL.  (Great start, I know…)  I’m a big kid at heart, I need to be tricked into getting those greens; I’ll eat them, but there’s got to be a lil’ something-something tossed between the leaves to bring me to the table.

This (kind of Wimbledon-inspired!) Strawberry and Gruyere Summer Salad is really easy to make and really hits the spot served up for an al fresco lunch or alongside a barbecue.  Fresh, sweet and creamy – with a sour, zingy edge thanks to the added raspberry vinaigrette – the strawberries really steal the show on this one, provided you pick the best the season has to offer.  British strawberries really are in their peak season at the moment and these “Red Diamond Strawbs” from my friends at Marks and Spencer are quite possibly the juiciest I’ve ever tasted; their sweet scent filled my car on the short drive back from my local M&S Food and perfumed my fridge and kitchen all weekend!  Get them while you can! 🙂 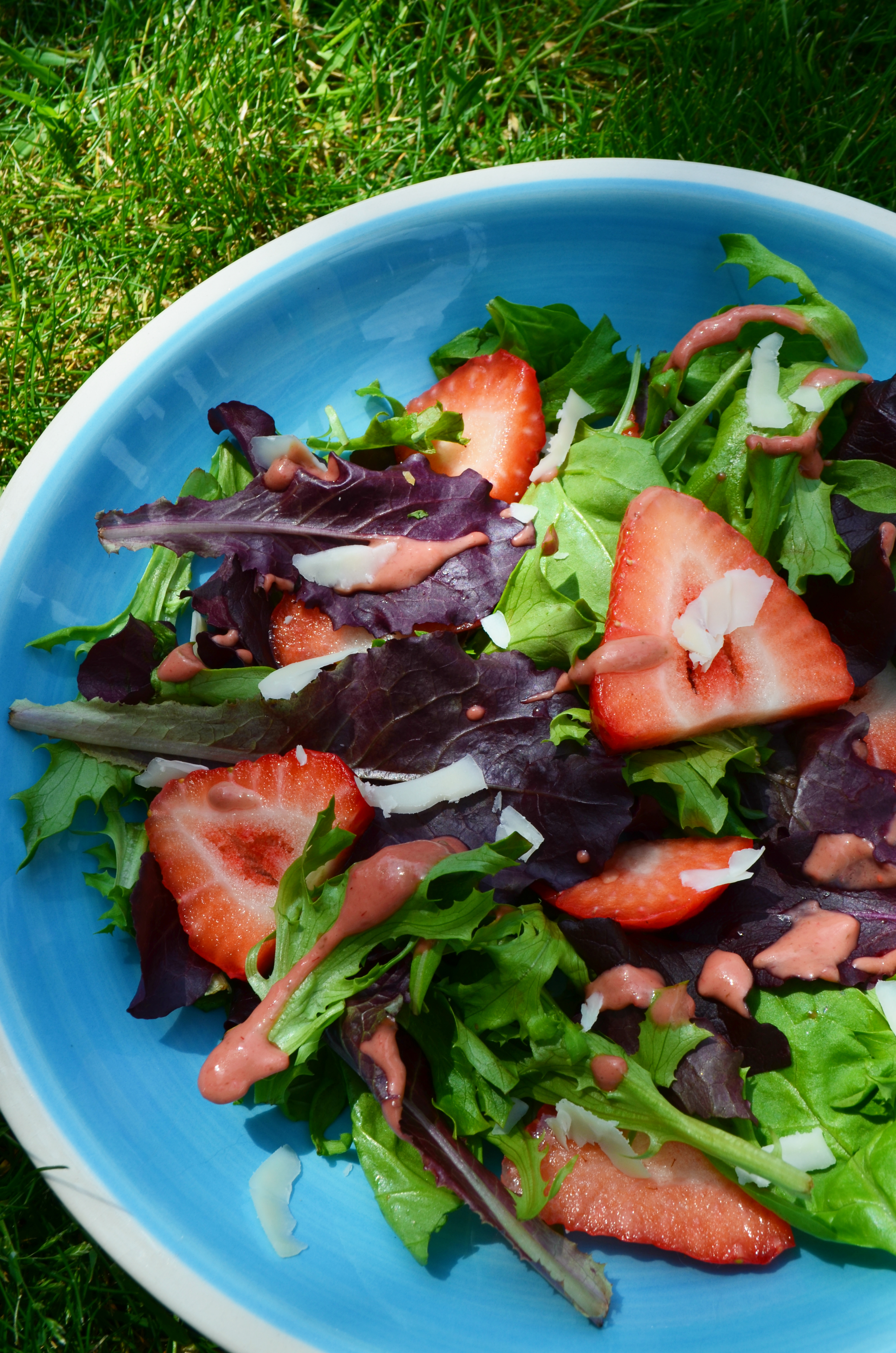 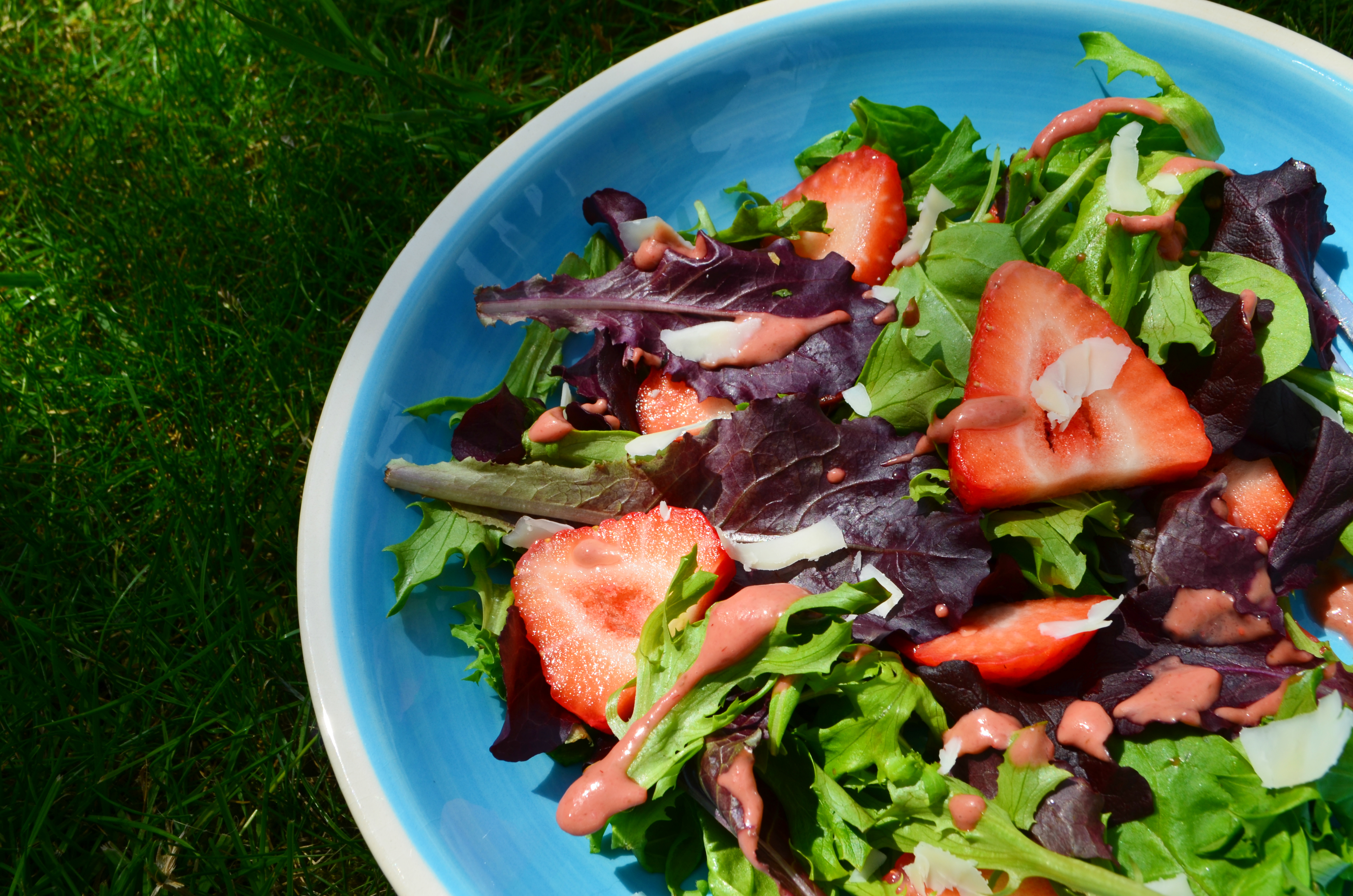 *This post contains gifted items from Marks and Spencer, to find out more about what that means click here to read my disclaimer. 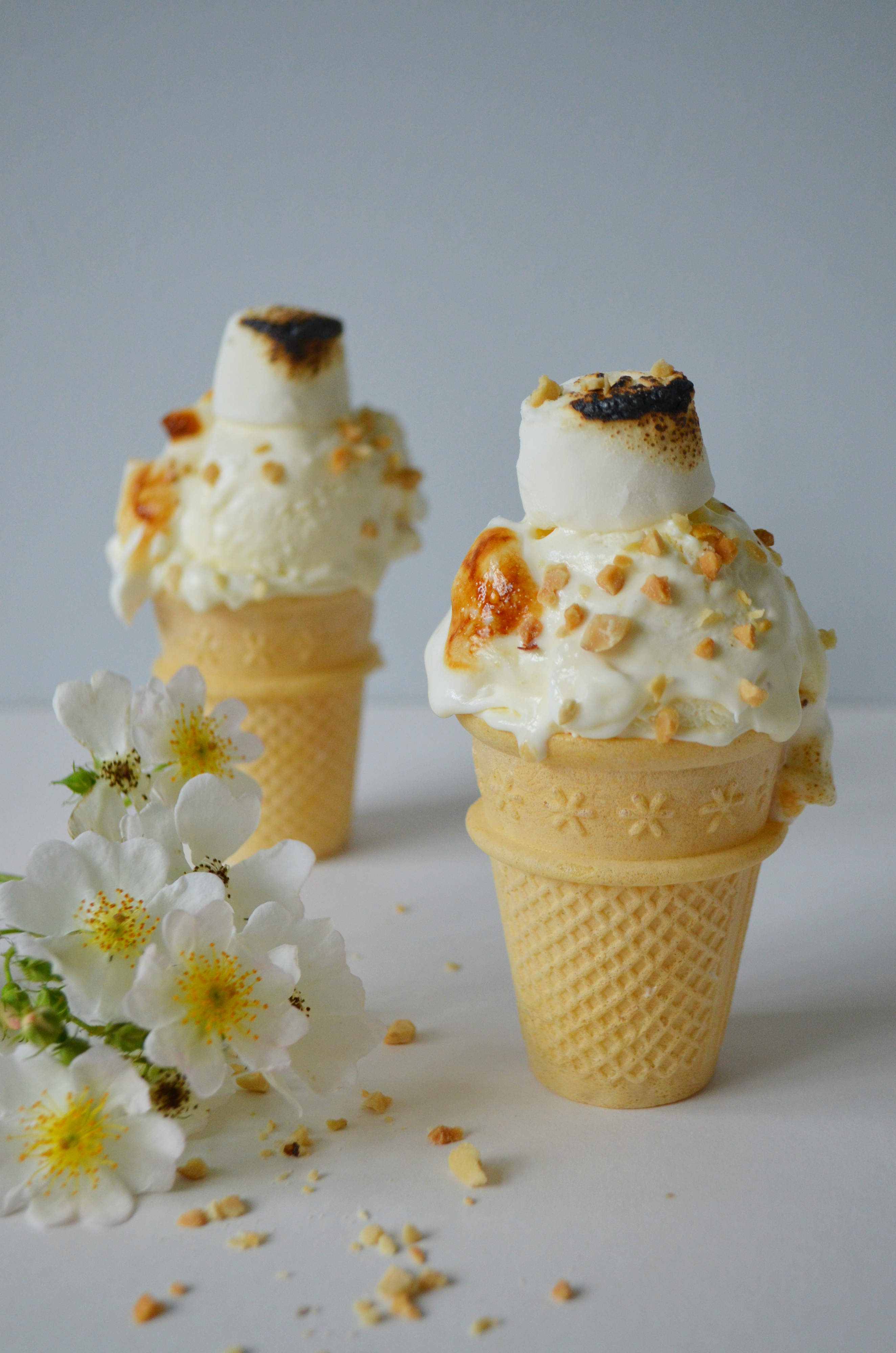 Okay, I’m well aware that it hasn’t exactly been “Ice Cream Weather” recently (it’s been so wet and windy here in Wales the past couple of weeks that I’ve had to dig my winter coat back out of storage)… so let’s call this post aspirational, shall we?  Mind you, I grew up slurping down Joe’s Icecream cwtched-up in the back of the car with my Mum and Mamgu parked up on the front in Mumbles in the dead of winter so I can’t say the weather’s ever really stopped me, so…

Don’t ever let anyone tell you that making ice cream is difficult – or that you need a special machine to do it – because they’re having you on (and trying to stop you from creating your own never ending supply of the good stuff…).  There are a lot of complicated recipes out there that involve creating the custard base with eggs, or stirring the mixture every hour as it freezes (ugh)… but this recipe?  It’s EASY.  Too easy, in fact.  All you need is some double cream and condensed milk, and with some restrained whipping you’ll have yourself a simple ice cream base that freezes like a dream (no need to break your wrist when it comes to scooping!) and can be flavoured any way you like it.

Since the weather’s been a bit… autumnal, I added some marshmallow fluff and toasted marshmallows to mine to make this Toasted Marshmallow Ice Cream – which I bet would be absolutely awesome served up between two cookies as a kind of Smores Ice Cream Sarnie.  Yum! 😉 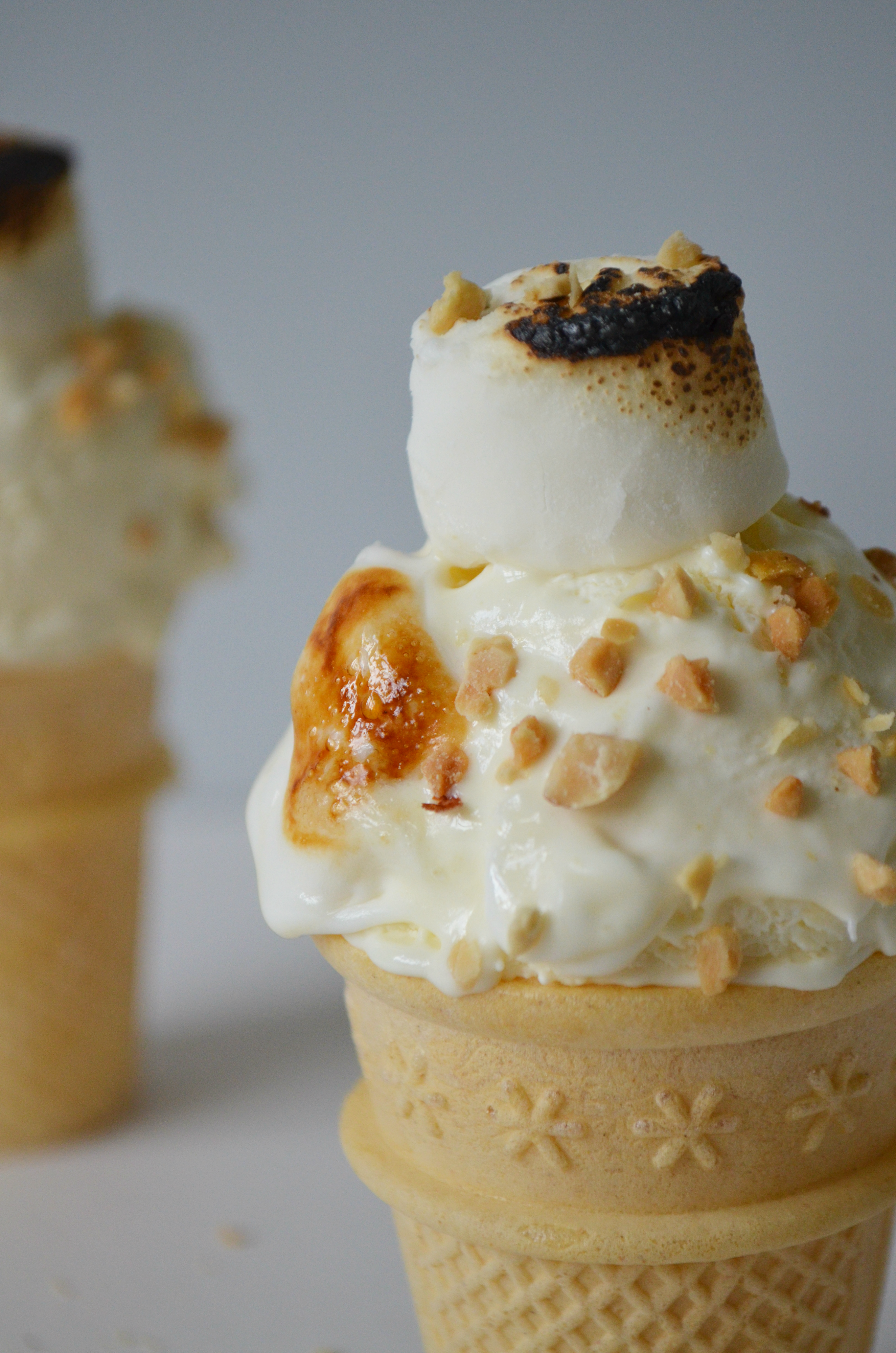 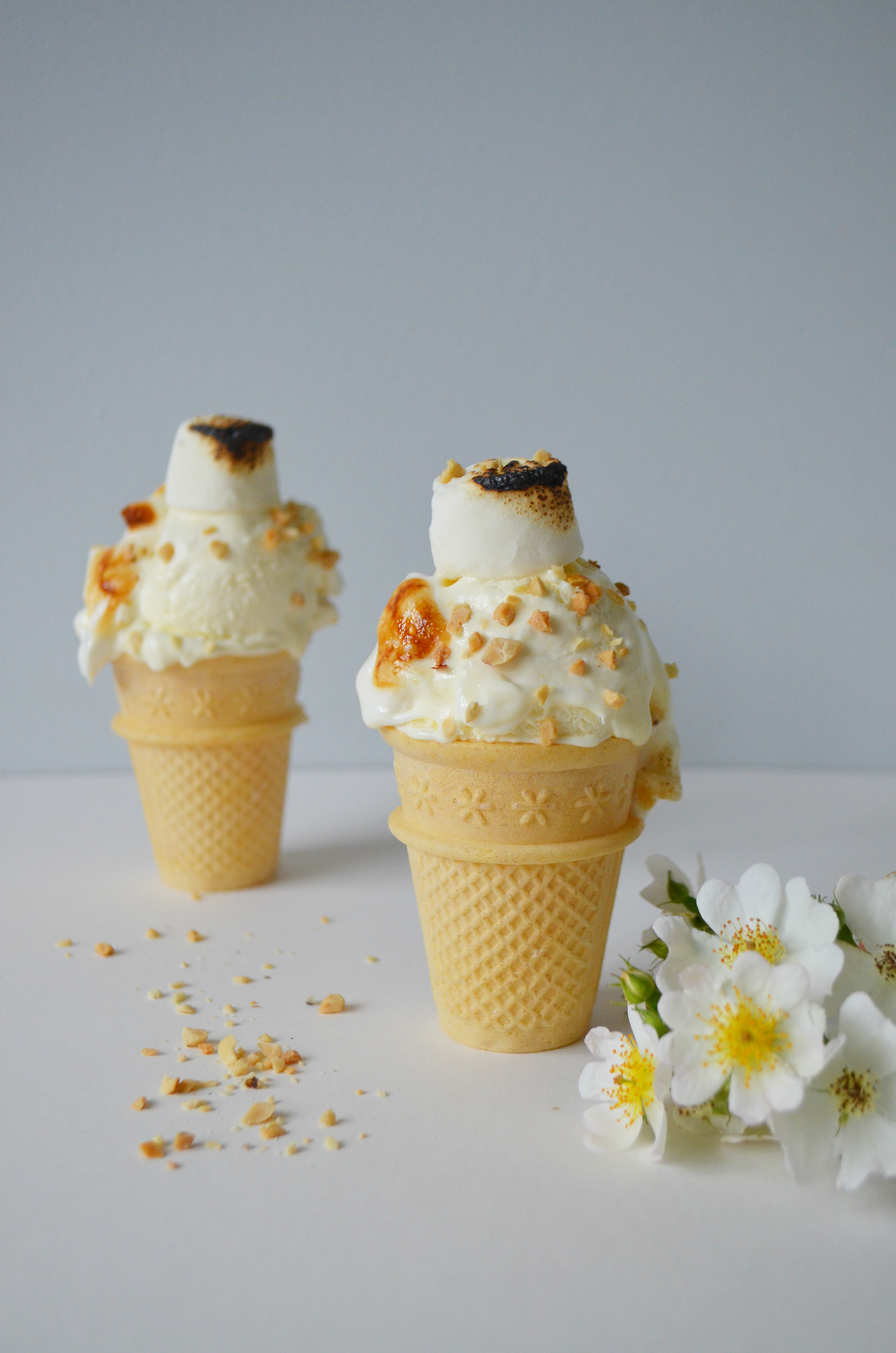 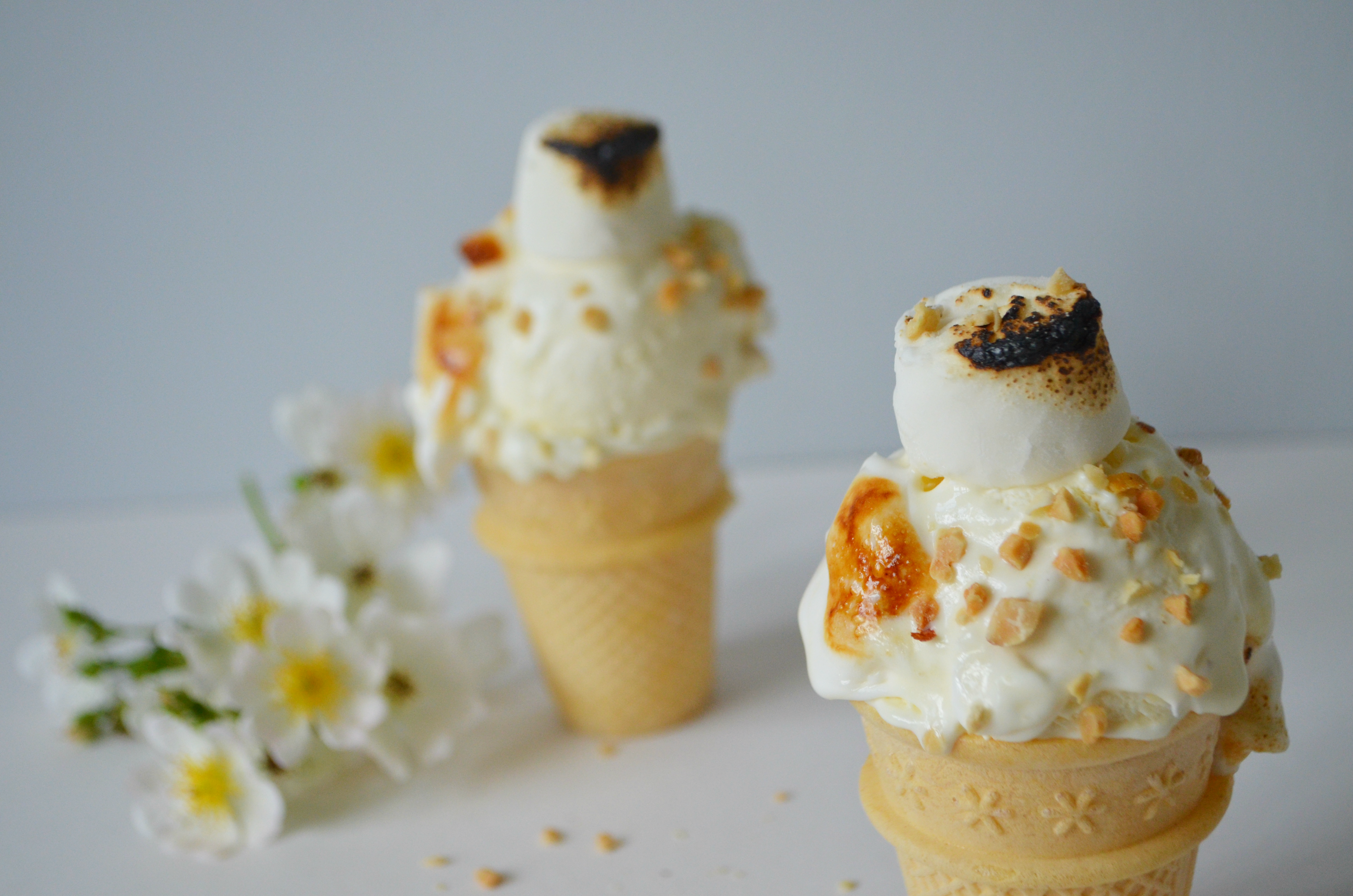 Have a great week! ♥ 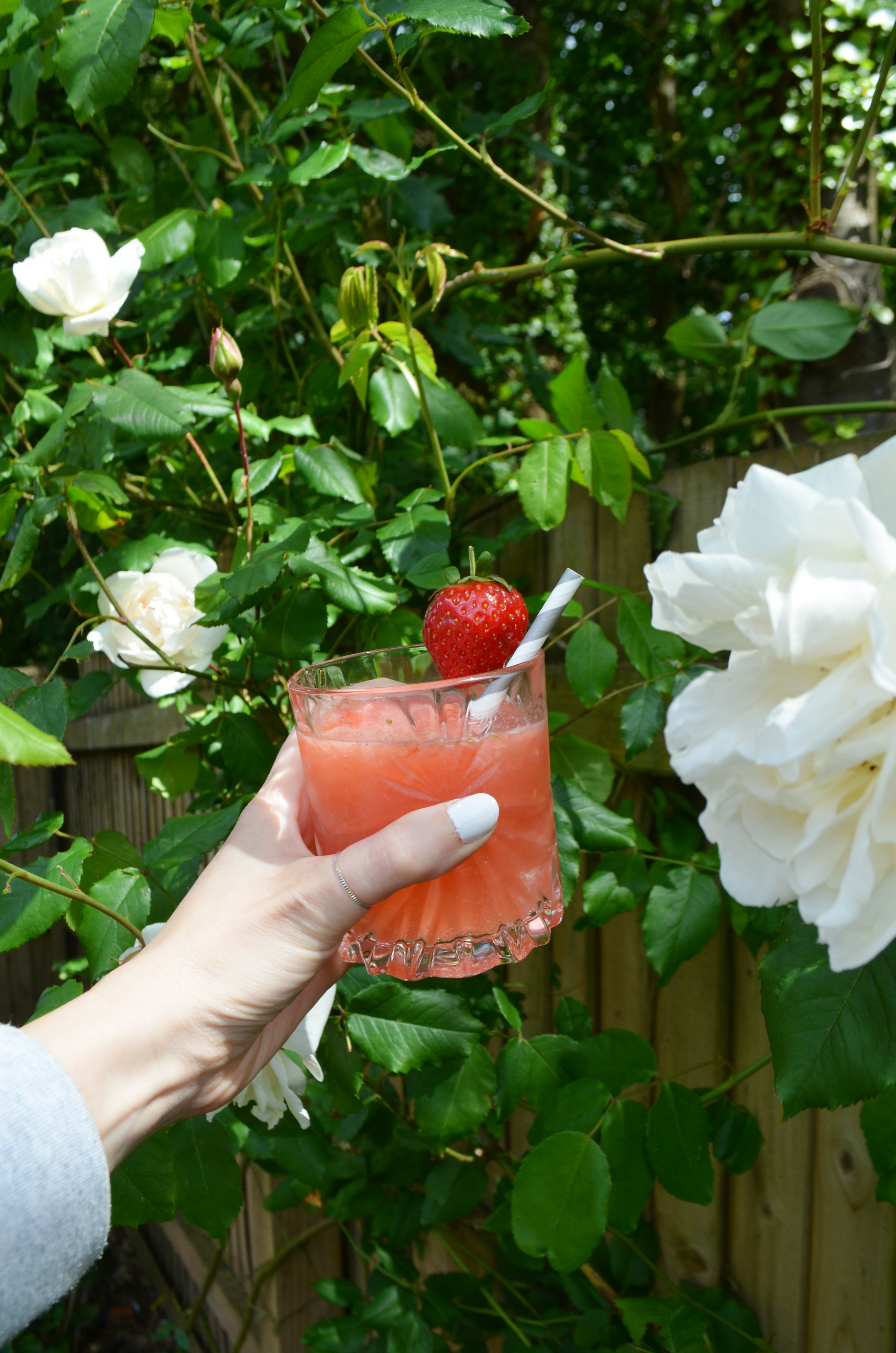 I’m not the biggest fan of Rosé (no way, Rosé!).  It’s way too close to white wine and I haven’t drunk that stuff since my twenty-first birthday (DON’T ASK).  But, when it’s sweetened with some fresh strawberries, syrup, a little lemonade and slushed?  Strawberry Frosé.  Now that, I can definitely get on board with.  It’s like an adult Slush Puppy (remember those?) – minus the blue tongue – and would be perfect served up at a barbecue or summery wedding.  The base recipe is also super-adaptable; if you’re not a fan of strawberries then swap them out for raspberries or peaches – yum!  And, the best thing?  They’re really easy to make – especially if you prep the night before.  All you need is a strong-bladed blender and you’re good to go. 🙂 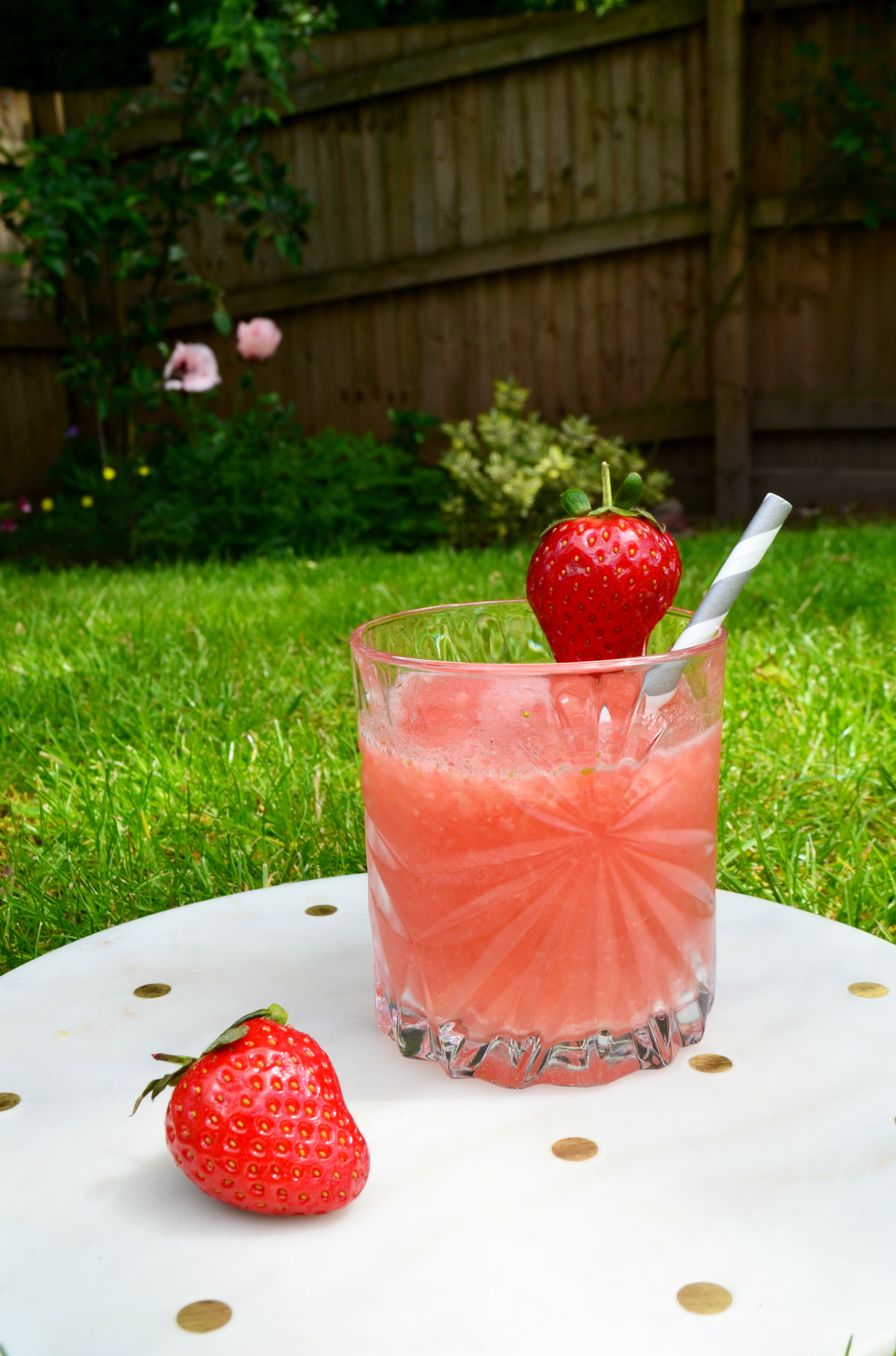 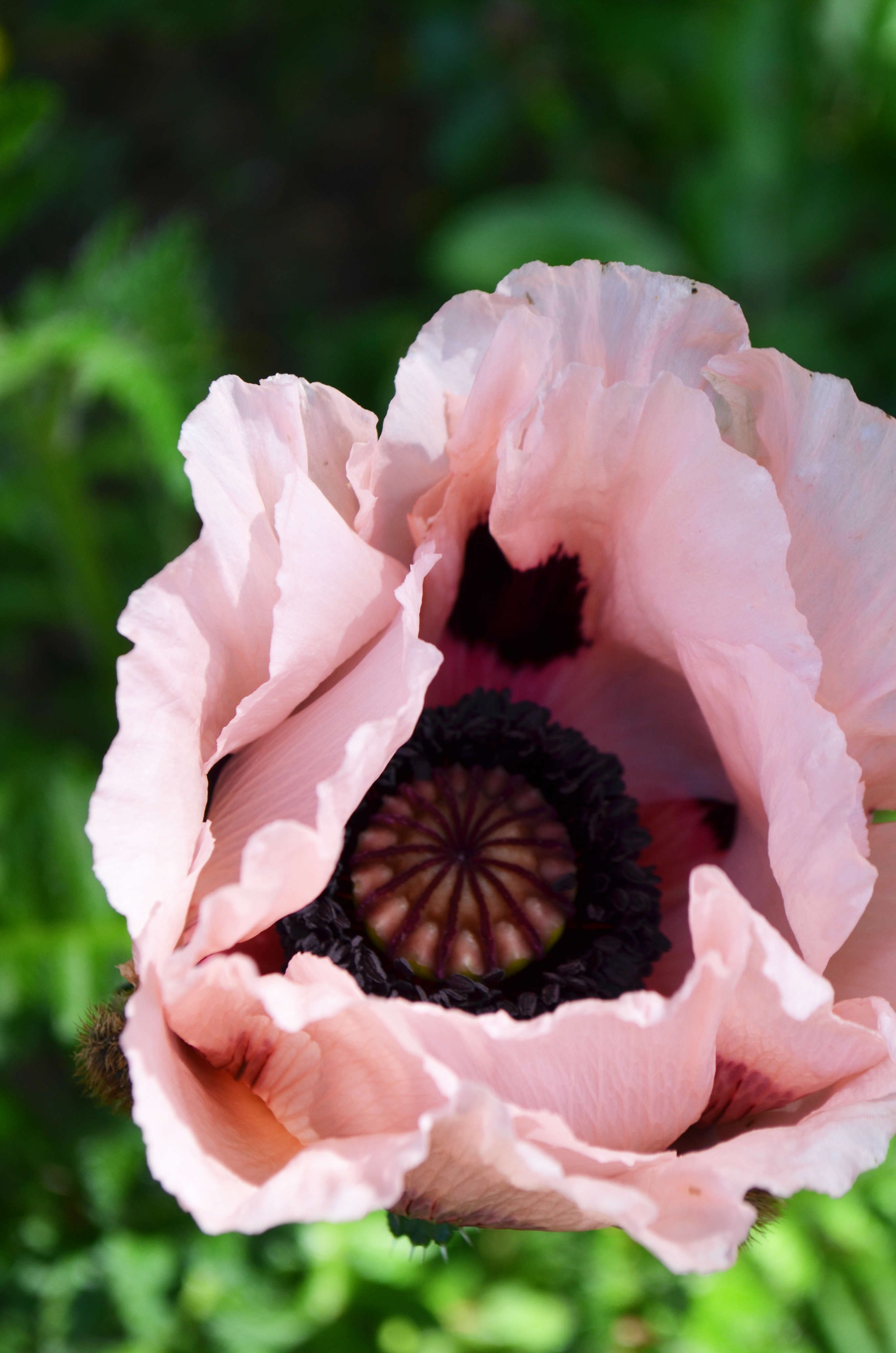 Have a beautiful weekend guys! 💕 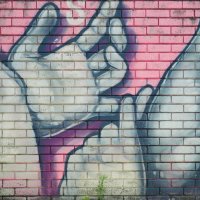 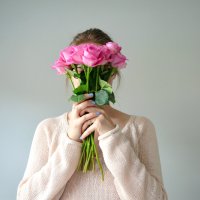 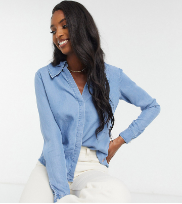